The structure, referred to informally as a “temple,” was not built even remotely like the music pavilion plans submitted to the U.S. Virgin Islands Department of Planning and Resources, NBC reported Thursday. Flanked by gold-painted statues, the mysterious building has inspired conspiracy theories.

The New York financier Jeffrey Epstein, was arrested last month for sex trafficking of minors, owned two islands, Little St. James and Big St. James, both located in the U.S. Virgin Islands. Locals preferred the name “Pedophile Island,” according to the Associated Press, and they told Vanity Fair that Epstein repeatedly brought girls to the island who “couldn’t have been over 16.” (RELATED: Epstein Wanted To Seed The Human Race By Impregnating Women On His New Mexico Ranch: Report)

It is unclear whether Epstein and his guests used the “temple” as a site to abuse minors. In the plans submitted to the Department of Planning and Resources in 2010, the building was going to act as a pavilion housing a grand piano, according to NBC. Epstein has been described by friends as a talented pianist.

However, the building is located on the southwest corner of Little St. James, far from any other structures, and questions remain why Epstein would build a music room in such a remote part of the island, according to Business Insider. 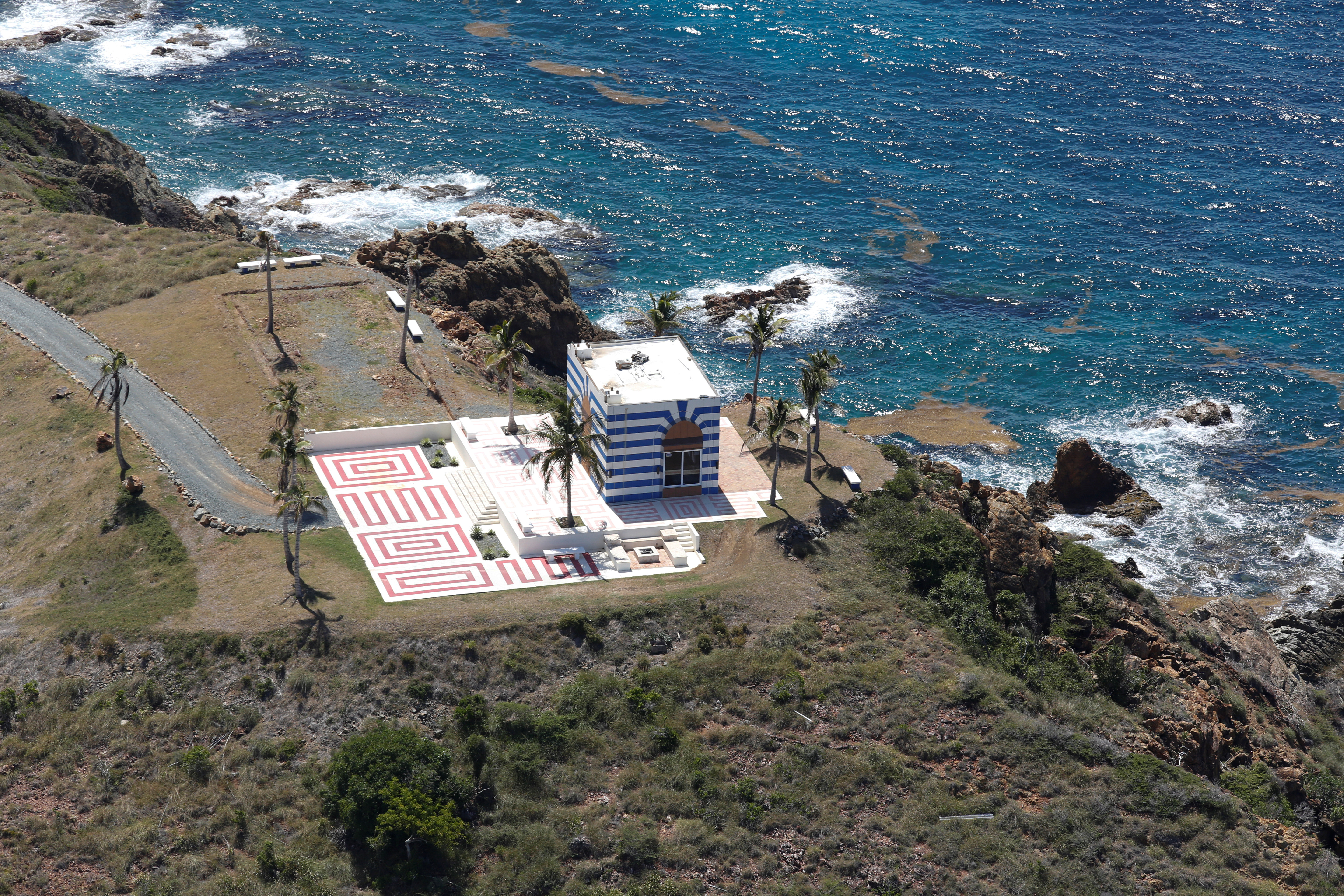 A building at Little St. James Island, one of the properties of financier Jeffrey Epstein, is seen in an aerial view, near Charlotte Amalie, St. Thomas, U.S. Virgin Islands July 21, 2019. The gold dome that previously topped the structure had been blown off by a 2017 hurricane. (Photo: REUTERS/Marco Bello)

The building in the 2010 plans was a 10-foot-tall octagonal pavilion, surrounded on five sides by porches. It bears little semblance to the seemingly 30-foot-tall square structure that was constructed, according to NBC.

The entrance to the blue and white-striped “temple” was flanked by gold-painted statues, and the building is seemingly entered through a massive wooden door. A gold dome topped the structure, until a hurricane blew it off in 2017, the building is also surrounded by a terrace with a labyrinth motif, according to New York Magazine. (RELATED: Epstein Will Be Met In Court With Over 1 Million Pages Of Evidence, Lawyers Say)

Notably, the door to the building seems to lock from the outside.

“It’s styled like what you might see on a castle, with what appears to be a reinforcing lock bar across the face,” contractor James Booth told Business Insider. “What makes it peculiar is that if you wanted to keep people out, the bar would be placed inside the building, [but the] locking bar appears to be placed on the outside … as if it were intended to lock people in.”

This is not the only time Epstein has defied the U.S. Virgin Islands Department of Planning and Resources. The department issued, and workers ignored, a stop-work order on the construction of an amphitheater and “underwater office and pool” on Big St. James, according to the New York Post.

Epstein is now facing up to 45 years in prison for sex crimes.