Carter Page’s visit to the University of Cambridge during the heat of the 2016 presidential campaign has long intrigued congressional Republicans looking into the origins of the FBI’s probe of the Trump campaign.

Page, an energy consultant who joined the Trump team in March 2016, attended an election-themed conference at the storied British university July 10, 2016, three weeks before the FBI officially opened a counterintelligence investigation of Team Trump. It was at the symposium that Page first crossed paths with Stefan Halper, a Cambridge professor who was also working as an FBI informant.

Now, congressional investigators are interested in Page’s host for the event.

A former State Department official who advised Mitt Romney’s 2008 presidential campaign, Steven Schrage invited Page to Cambridge. While the invitation has previously been reported, Page told the Daily Caller News Foundation he and Schrage remained in contact until after the 2016 election. They met at the Republican National Convention in Cleveland and in the Washington, D.C., area, Page said in an exclusive phone interview this week.

It is unclear if Schrage played a role in the Trump-Russia investigation or if he was aware that Halper was an FBI informant. Page said he saw nothing during his encounters with Schrage that made him suspect he was involved in the government’s investigation of him.

“I never saw anything suspicious,” Page said of Schrage, noting he is reluctant to “point fingers” at anyone because of his own experience facing what he says are false accusations of being a Russian agent.

California Rep. Devin Nunes is not so reserved.

Nunes, the top Republican on the House Intelligence Committee, dropped Schrage’s name out of the clear blue during his opening statement at the July 24 hearing with former special counsel Robert Mueller. When Nunes asked Mueller whether the special counsel’s office interviewed Schrage, the former FBI director replied, “In those areas, I am going to stay away from.”

Nunes said in a Fox News interview Sunday that he wants to know why Schrage invited Page to Cambridge and whether his contacts with the former Trump adviser were linked to the FBI’s own interests in the Trump campaign.

“What we’re trying to figure out is when did the FBI really start to run the investigation, what types of processes did they use, what was the predicate. Because, look, it really appears like they were spying on the Trump campaign,” Nunes said.

“Maybe [Schrage] was just a guy working for minimum wage sweeping the floors around Cambridge. I highly doubt it,” the Republican added. “And the fact that he hasn’t come forward in two-and-a-half years is highly suspect.”

Nunes also said he wants to know whether Schrage handled the Steele dossier, the infamous and salacious report alleging conspiracy between the Trump campaign and Russia. The FBI relied heavily on the dossier, written by former British spy Christopher Steele, to obtain wiretap warrants against Page.

The special counsel’s investigation all but debunked the dossier’s core claim that the Trump campaign, including Page, took part in a “well-developed conspiracy of co-operation” with the Kremlin. Mueller testified that his team failed to establish that a conspiracy occurred.

Nunes did not say whether he has evidence that Schrage handled Steele’s reporting. Schrage has not responded to multiple requests for comment over the past several months.

Cambridge was something of a career change for Schrage.

After working on the George W. Bush presidential campaign, Schrage was appointed in 2002 as deputy assistant secretary of state for international narcotics and law enforcement affairs, making him one of the youngest senior State Department officials at the agency.

After leaving Foggy Bottom, Schrage joined Mitt Romney’s 2008 presidential campaign as a foreign policy and trade adviser. He then held a top position at the Center for Strategic and International Studies (CSIS), a prominent Washington think tank. In 2010, then-Massachusetts Sen. Scott Brown appointed Schrage his chief of staff.

At Cambridge, Schrage studied for a Ph.D. under Halper, whose career path in academia, politics and government bears striking similarities to Schrage’s. Halper worked in the Nixon, Ford and Reagan administrations, as well as for the George H.W. Bush presidential campaign in 1980, before joining Ronald Reagan’s campaign.

As part of the Reagan team, Halper became embroiled in “Debategate,” a scandal involving the theft of briefing documents from Jimmy Carter’s campaign. Halper worked with a team of former CIA agents (his father-in-law at the time was former CIA bigwig Ray Cline) on the Reagan-Bush team to collect intelligence from Carter’s campaign, The New York Times reported in 1983. Halper denied it at the time.

Halper served as deputy assistant secretary for political-military affairs in the Regan State Department before leaving in 1984 to form a bank that came under scrutiny during the Iran-Contra scandal.

Halper shifted toward academia beginning in the 2000s. He earned a Ph.D. at Cambridge in 2004, and formed the Cambridge Intelligence Seminar, a quarterly symposium that hosts intelligence community professionals from Western intelligence services. Halper formed the group along with Sir Richard Dearlove, the former head of MI6.

During his transition, he reportedly began working as an informant for the FBI. He was also reportedly a source for the CIA.

Schrage would likely have been aware of Halper’s links to the intelligence community, but it is unclear what, if anything, he knew of the professor’s gig as an FBI informant.

Schrage invited Page to the Cambridge event in an email on June 7, 2016. A similar invitation was sent to Stephen Miller, a top Trump campaign official who now works in the White House. Miller did not attend the event.

“It was great to talk with you and catch up,” Schrage wrote in his invite to Page.

“Congrats again on your role in the Trump campaign — from my experiences, there is nothing like it and the opportunity it presents to shape a new grand strategy and impact global affairs,” he said. “I hope to be able to host you in historic Cambridge for this event.”

Page, who has multiple graduate degrees and a Ph.D. from the University of London, accepted the offer and showed up at Cambridge on July 10, 2016, just two days after a fateful visit to Moscow that would play a central role in the dossier.

Steele, the dossier author, alleged that during Page’s visit to Moscow, he met secretly with two Kremlin insiders, Igor Sechin and Igor Diveykin, as part of a “well-developed conspiracy of co-operation” between the Trump campaign and Russian government.

Page has vehemently denied the allegations. 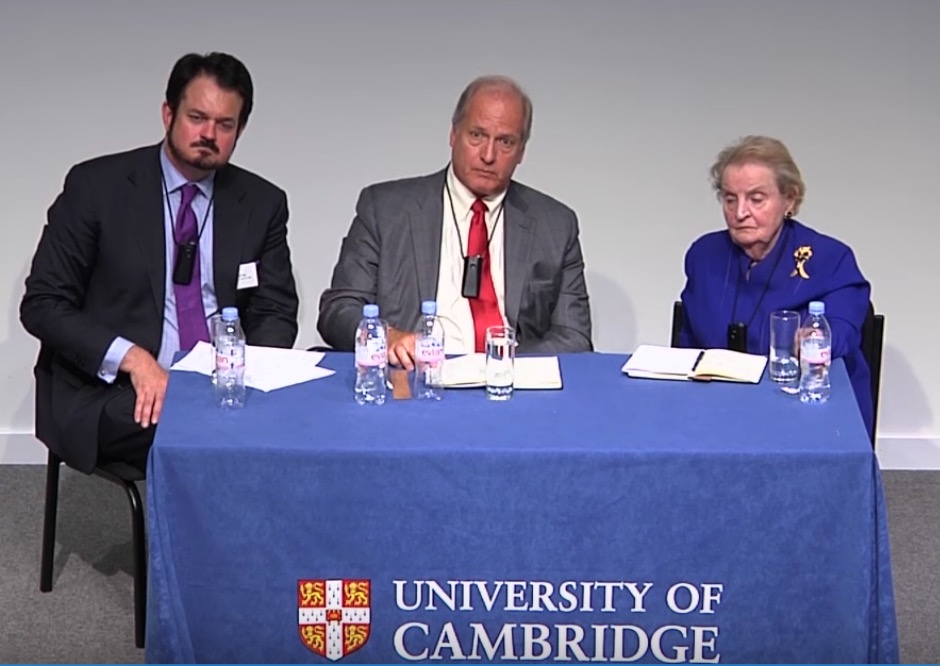 Dearlove and Halper also attended the symposium. Page has said he spoke to most of the attendees and had conversations with Halper. Nobody from Hillary Clinton’s campaign appeared at the event, though it is unclear if any of her aides were invited.

Page said he might have crossed paths with Schrage prior to the invitation, but he does not recall any specific encounters.

Republican lawmakers have expressed interest in the event because of where it fits into the timeline of the FBI’s investigation of the Trump campaign’s ties to Russia.

FBI officials have said the investigation began July 31, 2016, after an Australian diplomat provided a tip about an interaction he had in May 2016 with George Papadopoulos. But the timing of the Page invitation raises the question of whether the FBI or any other government agency was informally investigating Page.

Nunes said Sunday that the FBI’s interest in the Trump campaign began before the official start date for the investigation.

“It’s clear that the FBI did not open the investigation on July 31st. That’s the paperwork,” he told Fox’s Maria Bartiromo.

After their initial meeting at Cambridge, Page next met Halper at his farm in Virginia on Aug. 20, 2016. They remained in contact through September 2017, the same month the FBI’s wiretap warrant against Page expired. (RELATED: EXCLUSIVE: Cambridge Prof With CIA, MI6 Ties Met With Trump Aide During Campaign, Beyond)

Page has told the DCNF that, as with Schrage, he had no suspicions that Halper was up to anything during their meetings. He said that he trusted Halper, but in retrospect recalls that the professor ratcheted up his contacts at key points in the Russia investigation, such as before the FBI submitted new applications for Foreign Intelligence Surveillance Act (FISA) warrants.

Page has released one email in which Halper addressed allegations that he colluded with Russia.

“It seems attention has shifted a bit from the ‘collusion’ investigation to the ‘contretempts’ [sic] within the White House,” Halper wrote in the July 28, 2017, email.

“I must assume this gives you some relief,” he continued, adding, “be in touch when you have the time. Would be great to catch up.”

Page’s contact with Schrage was not as frequent as with Halper.

After Cambridge, Page said he met Schrage at the Republican National Convention in Cleveland, which was held between July 18 and 21, 2016. Page also said Schrage expressed interest in a position in the Trump administration. They met again in the Washington, D.C., area, though Page did not provide a timeline for that meeting.

Halper also established contacts with Papadopoulos, who joined the Trump campaign at the same time as Page. The FBI informant reached out to Papadopoulos on Sept. 2, 2016, with an offer of $3,000 and a trip to London to write an academic paper about Mediterranean energy issues. (RELATED: EXCLUSIVE: A Meeting In London Before The Election Aroused George Papadopoulos’s Suspicions)

Papadopoulos accepted the offer and met with Halper and his purported assistant, Azra Turk. Papadopoulos met with his two hosts multiple times over the course of several days. He has said that he was asked whether he knew of links between the Trump campaign and Russia and whether he was involved in the release of Democrats’ emails.

Papadopoulos said he angrily denied the line of questioning.

He pleaded guilty in the special counsel’s investigation to making false statements to the FBI, but did not face charges related to computer hacking or a conspiracy with Russia.