The Mirror watched CNN’s debate nights along with the rest of the nation this week.

It’s time to dole out some awards.

Some will be welcomed. Others will leave something to be desired.

So it goes with the fierce race for the White House against President Trump in 2020.

Viewers could not get enough of her chic white pantsuit. Even Heavy.com wrote a piece saying Gabbard’s pantsuit won the debate. “During Gabbard’s opening statement, the pantsuit continued to shine,” the site wrote, practically bringing the ensemble to life. (RELATED: Tulsi Gabbard Steals Show With White Pantsuit) 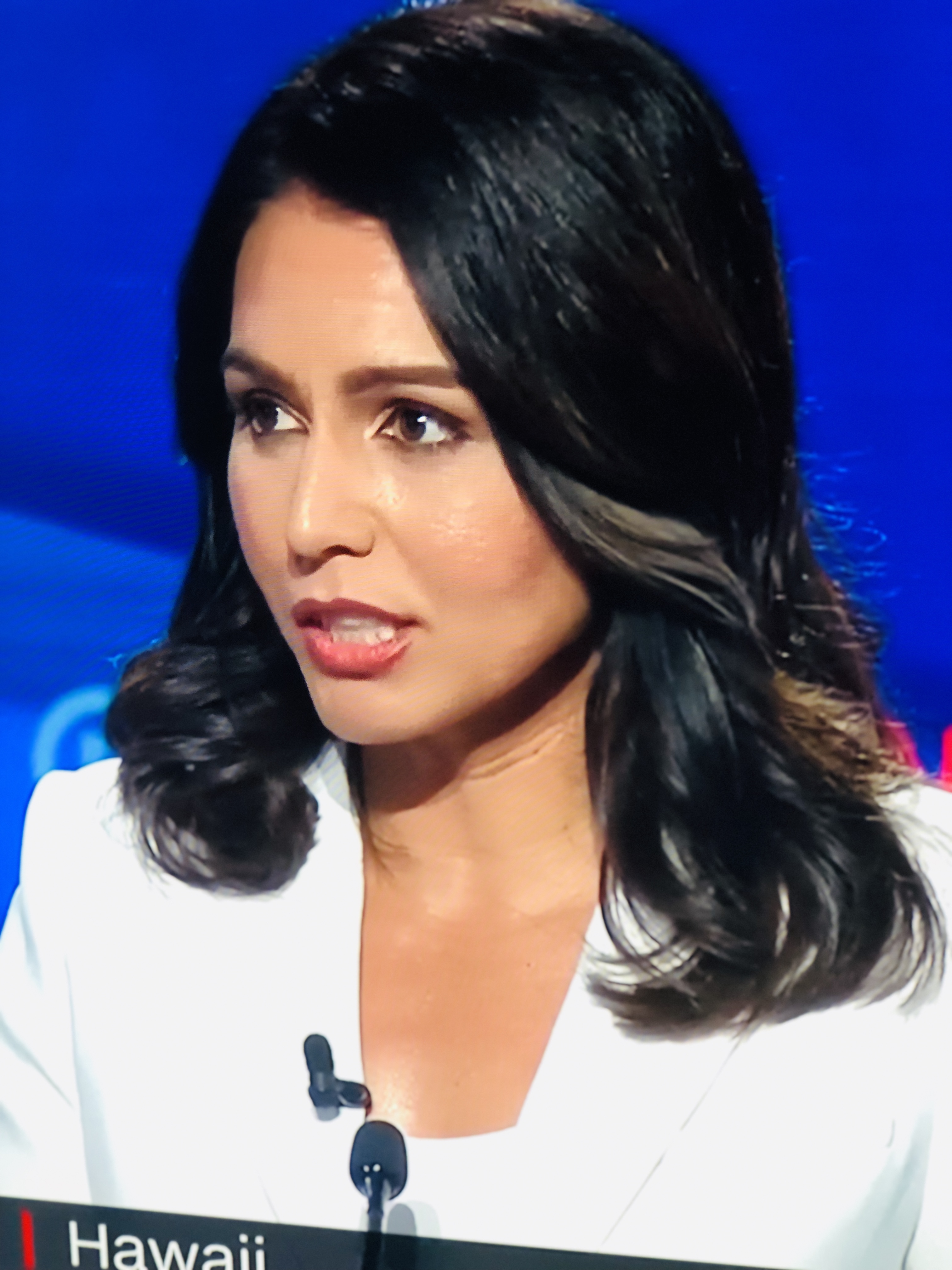 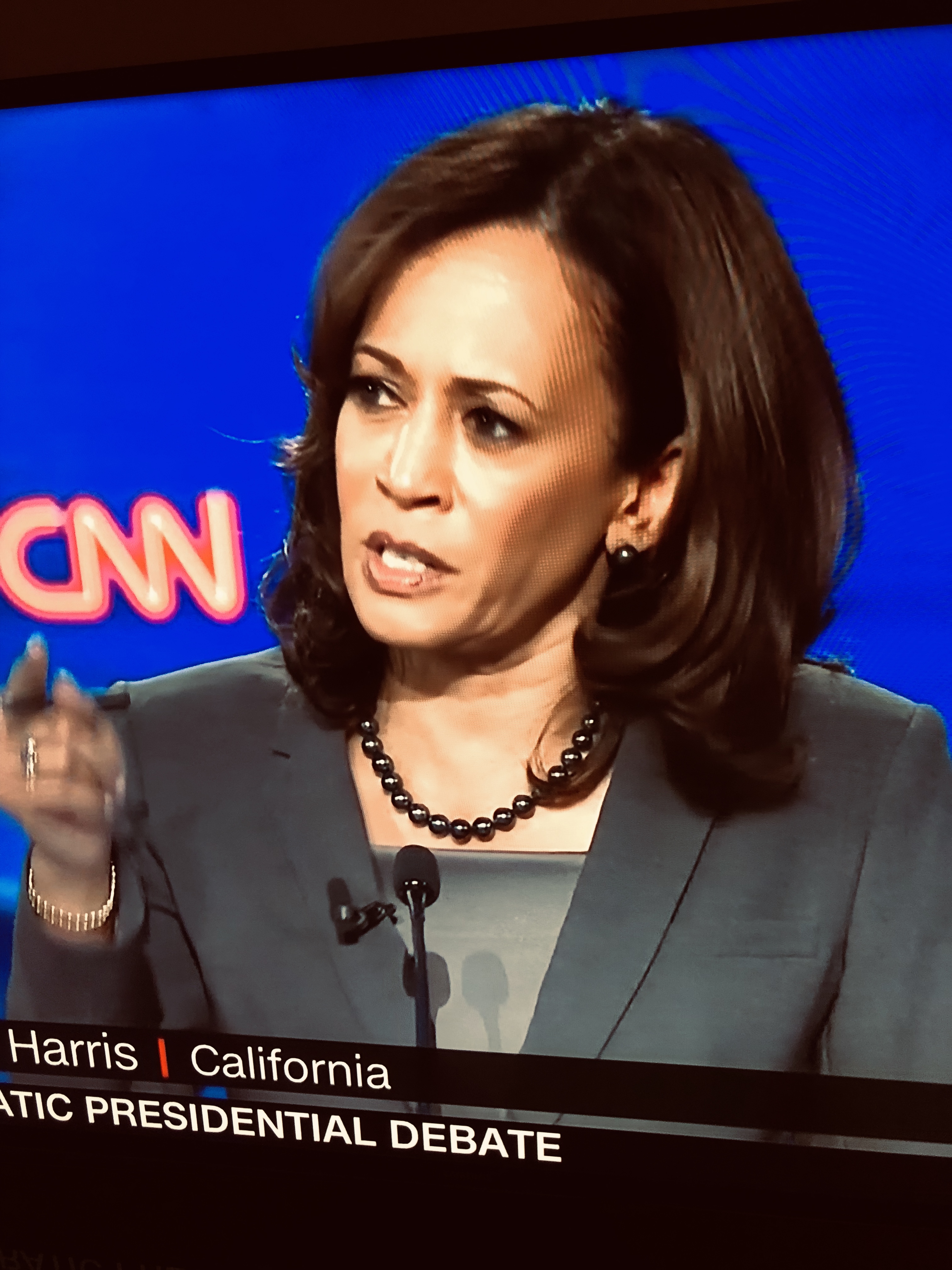 Her dark pearl necklace and earrings were gorgeous.

In other Harris news … she received the nastiest comment of the evening from Fox Nation’s Tomi Lahren, who tweeted, “Kamala did you fight for ideals or did you sleep your way to the top with Willie Brown?” 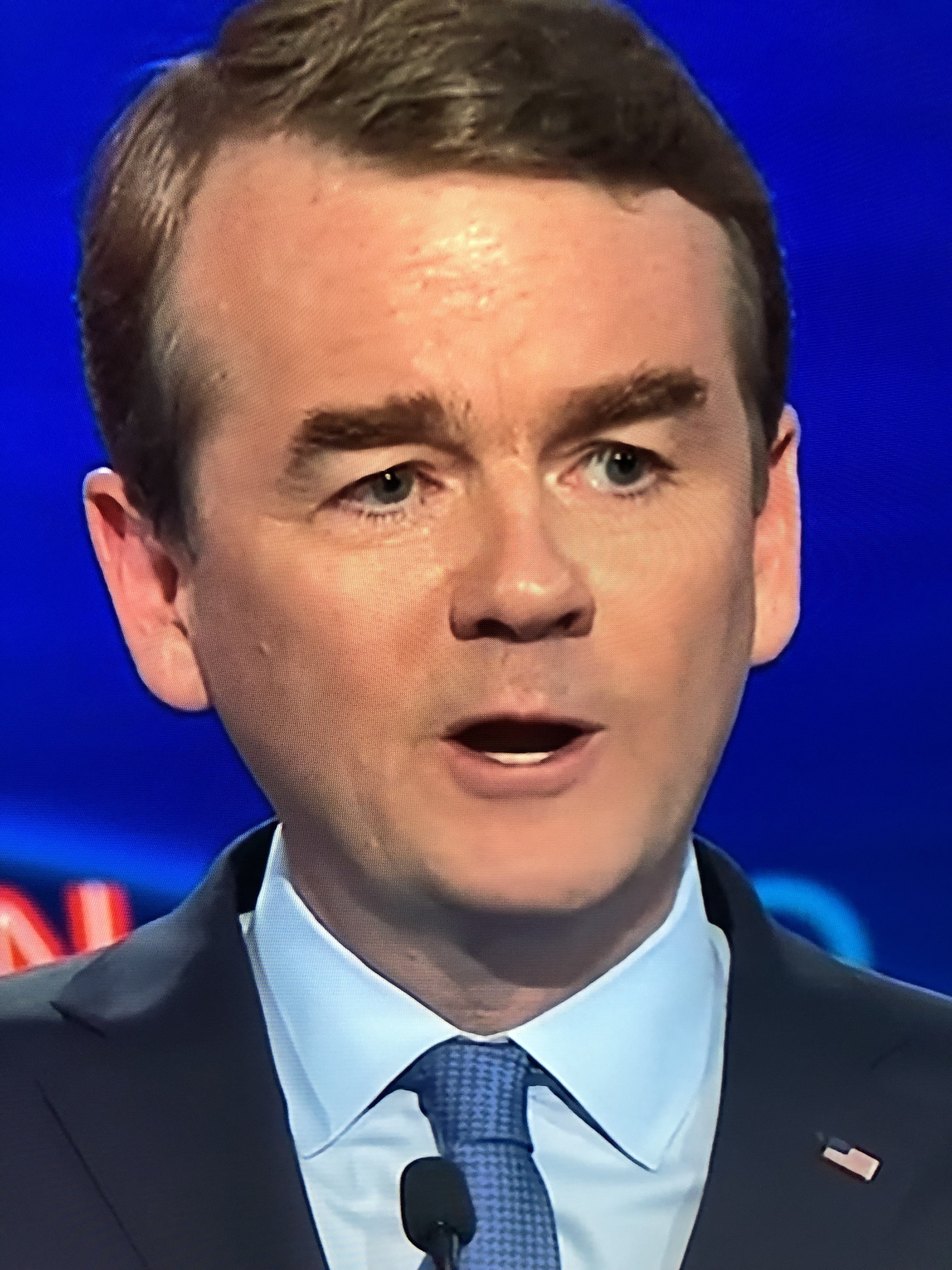 Winner: Former Vice President Joe Biden (including when he awkwardly reeled off that bizarre website address at the end of his concluding remarks. No one could figure out what the f–k was happening there, including him. All in all, he handled all the punches coming at him pretty well, with calmness and a smile. In fact, he had a big toothy grin with the whitest set of teeth you’ve ever seen. If he doesn’t win, Crest should hire him for teeth whitening commercials.

Angus Johnston, professor, City University of New York: “Biden has so many teeth now. He didn’t used to have this many teeth.”

Joe Concha, media columnist, The Hill: “It is amusing bordering on disturbing that Biden’s innocuous ‘Go easy on me, kid’ line to Harris upon greeting her on stage is being dissected and scrutinized as much as it is. What sane person would run for president in 2019?”

Least Presidential (And maybe this is a good thing…)

Winner: Andrew Yang, businessman. (He wore no tie. The Brown graduate talked like he had some brain cells in his head. He probably doesn’t have a chance, and it’s too bad.)

Most Likely To Get Booed Off The Stage

Winner: New York Mayor Bill de BLAHHHHHsio (Every time this man spoke, it was time for him to be quiet.) He also got horrible reviews on Twitter across the board that included ABC “The View” co-host Abby Huntsman and The New Yorker‘s Susan Glasser. As if this guy couldn’t be more dickish, on Thursday he made passengers on his Delta flight wait on the tarmac so he and his security detail could get off the plane first to make an appearance on ABC’s “The View.” He only made regular people wait 10 minutes. But this is New York. Passengers were pissed. De Blasio was all out of luck — A New York Post reporter was on the plane and asked his spokesperson if the scribe could ask a question about 900 classrooms testing positive for lead. The answer: NO.

Huntsman: “Pretty sickening to listen to de Blasio’s opening statement about crime when two nights ago someone I know was mugged and robbed right in midtown full of people. One of many sad examples recently. The city he represents.”

Glasser: “Remind me how Bill de Blasio was elected mayor of the greatest city in the world?”

Rick Wilson, GOP pundit: “I say this with no partisan rancor, but does anyone in America like Bill de Blasio? Are there de Blasibros?”

Runner Up: Sen. Amy Klobuchar (D-Minn.). There are stories about her treating her staff like crap. There is no excuse for that. She’s also painfully boring, as exemplified by her recent appearance at the National Press Club, which nearly put me to sleep.

Winner: Julian Castro (D-Texas), former Sec. of Housing and Urban Development.  His tie’s candy cane design made him stand out in the crowd without the usual solid red number. 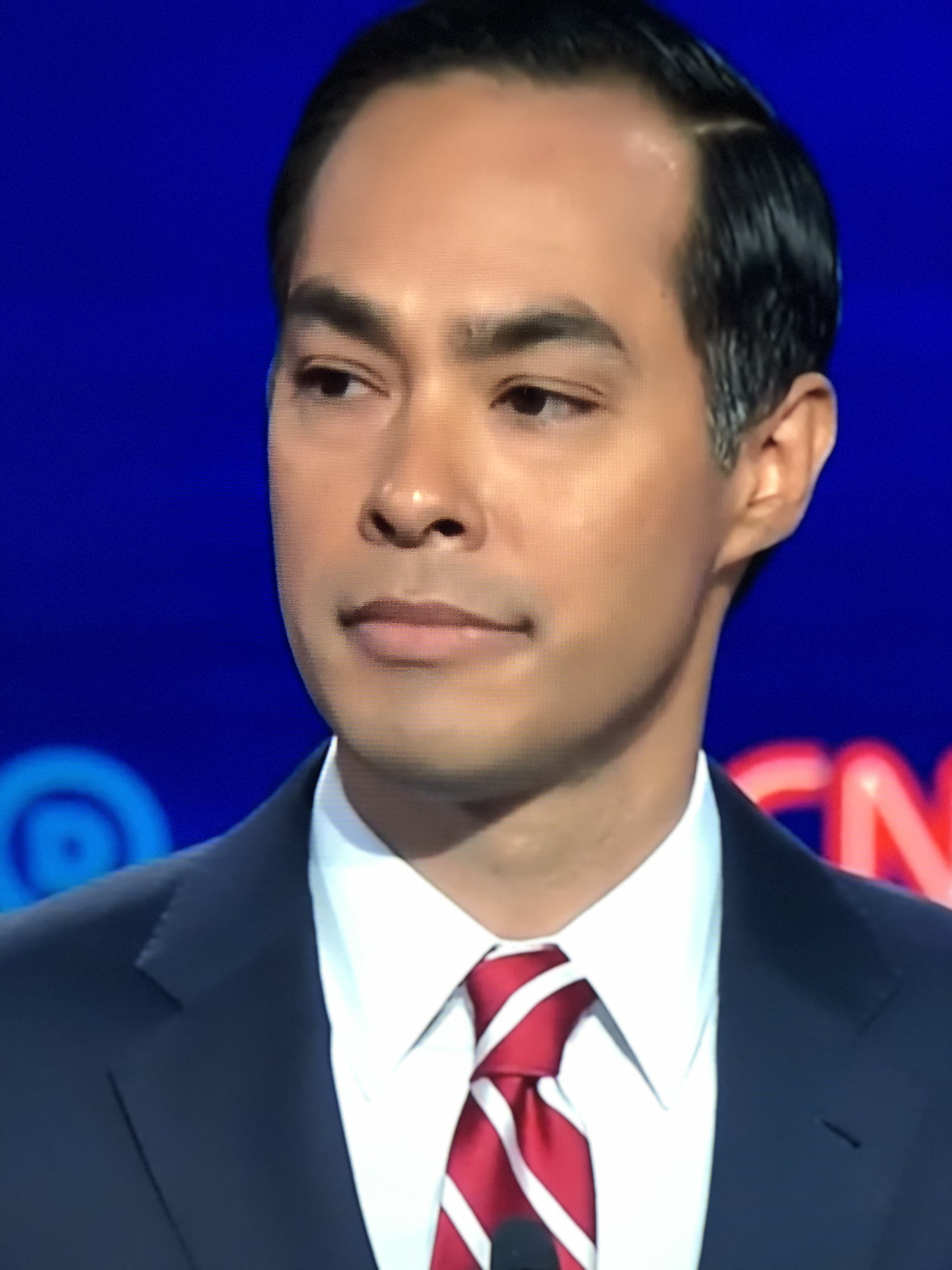 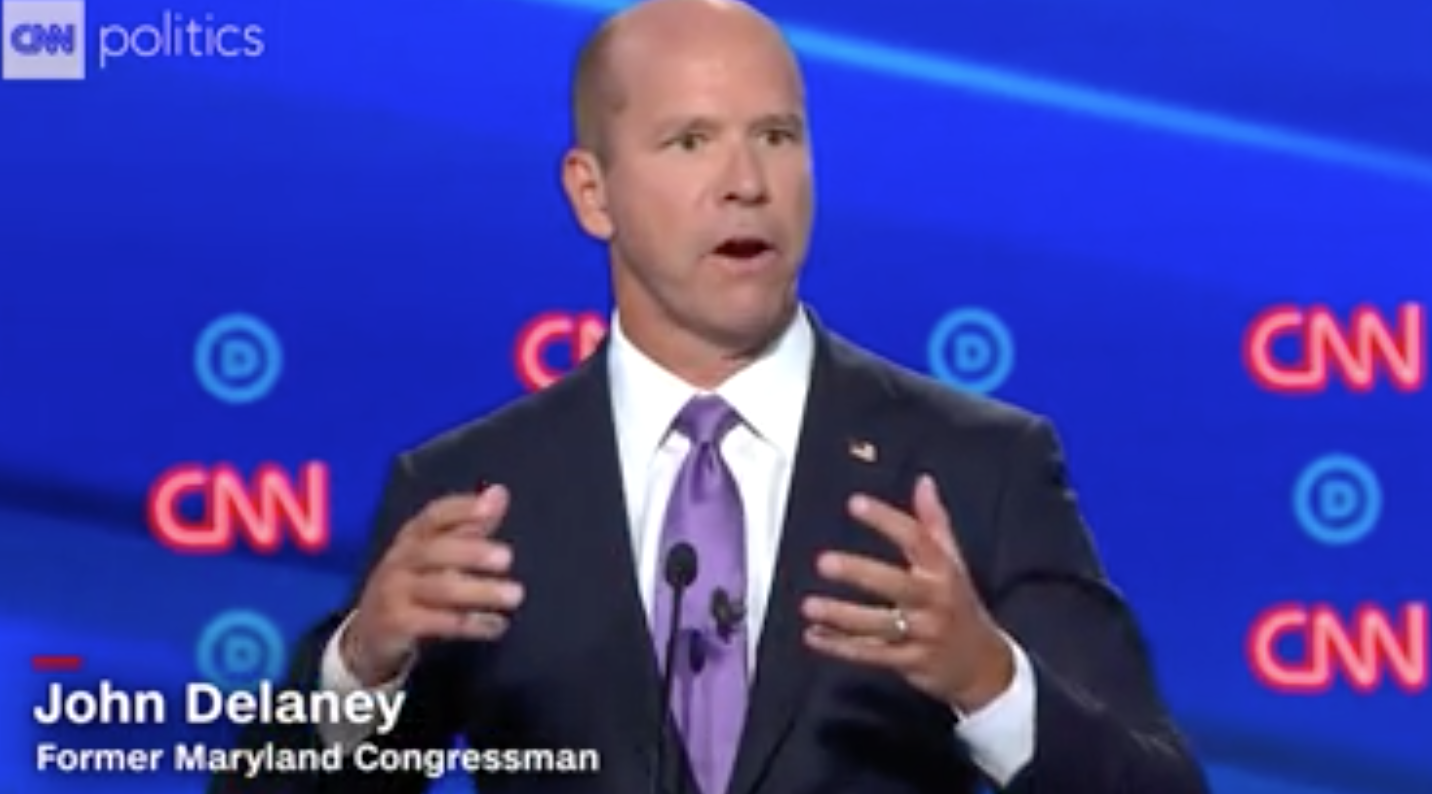 You Can’t Stop Watching His Hands

Winner: Former Rep. Beto O’Rourke (D-Texas). Once you start watching his hands and his arms, it’s hard to stop. He uses them incessantly. It’s awkward and makes him appear a bit goofy.

Winner: Washington Gov. Jay Inslee, who definitely had the smoothest skin on the stage. 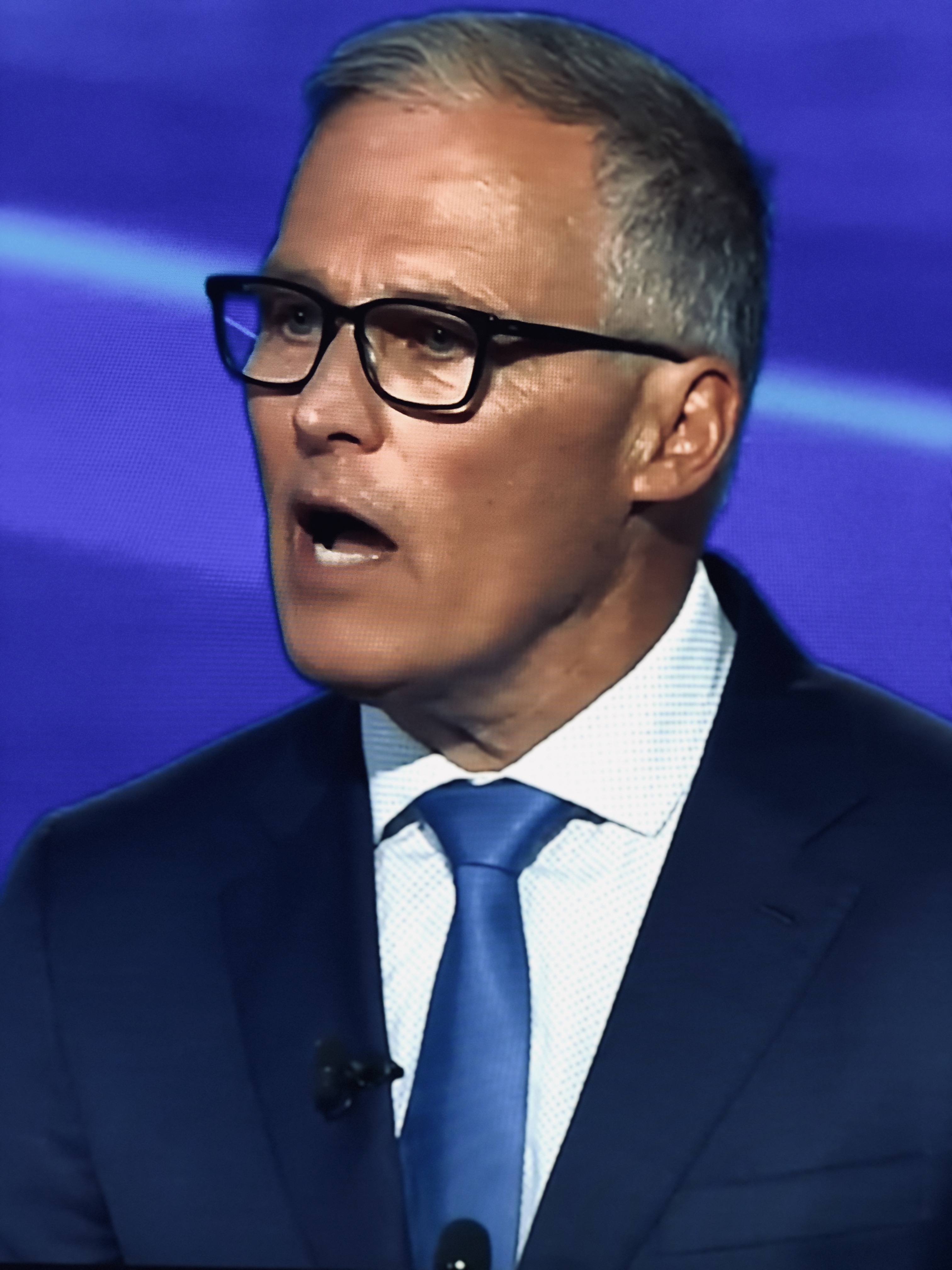 Best Lines of the Night

Winner: Washington Gov. Jay Inslee — “We cannot work this out! The time is up. Our house is on fire!” Inslee yelled at Biden who said “we’d work out” getting coal and and fracking were eliminated. “Get off coal. Save this country and the planet, that’s what I’m for.”

First Runner Up: Sen. Kirsten Gillibrand (D-N.Y) — “The first thing I’lll do as president is Clorox the Oval Office.”

Not everyone was so tickled by this line, which was a reference to President Trump. The Federalist‘s culture writer Emily Jashinsky tweeted, “If Kirsten Gillibrand is elected, she promises the first female president’s first act would be… cleaning?”

Second Runner Up: Rep. Tulsi Gabbard’s attack on Sen. Kamala Harris was gripping. “There are too many examples to cite, but she put over 1,500 people in jail for marijuana violations and then laughed about it when she was asked if she ever smoked marijuana,” Gabbard said. “The people who suffered under your reign as prosecutor, you owe them an apology.”

Fourth Runner Up: Sen. Elizabeth Warren (D-Mass.): “You know I don’t know why anybody goes to all the trouble of running for president of the United States just to talk about what we can’t do and shouldn’t fight for.”

Looks Like He/She Is Perpetually Sucking On A Lemon

The Candidate You Most Want At Your Thanksgiving Dinner Table

Winner: Marianne Williamson (to ward off all those bad spirits and annoying family members. The meal will begin with a meditation on love. The idea of the meal ending with an exorcism is not out of the realm of possibility. )

First runner up: Sen. Bernie Sanders (D-Vt.) (With a grouchy personality, loud voice and New England accent, you’ll think Larry David is at your house. You will laugh all day long. He might even throw up his arms in exasperation at some point in the day.) 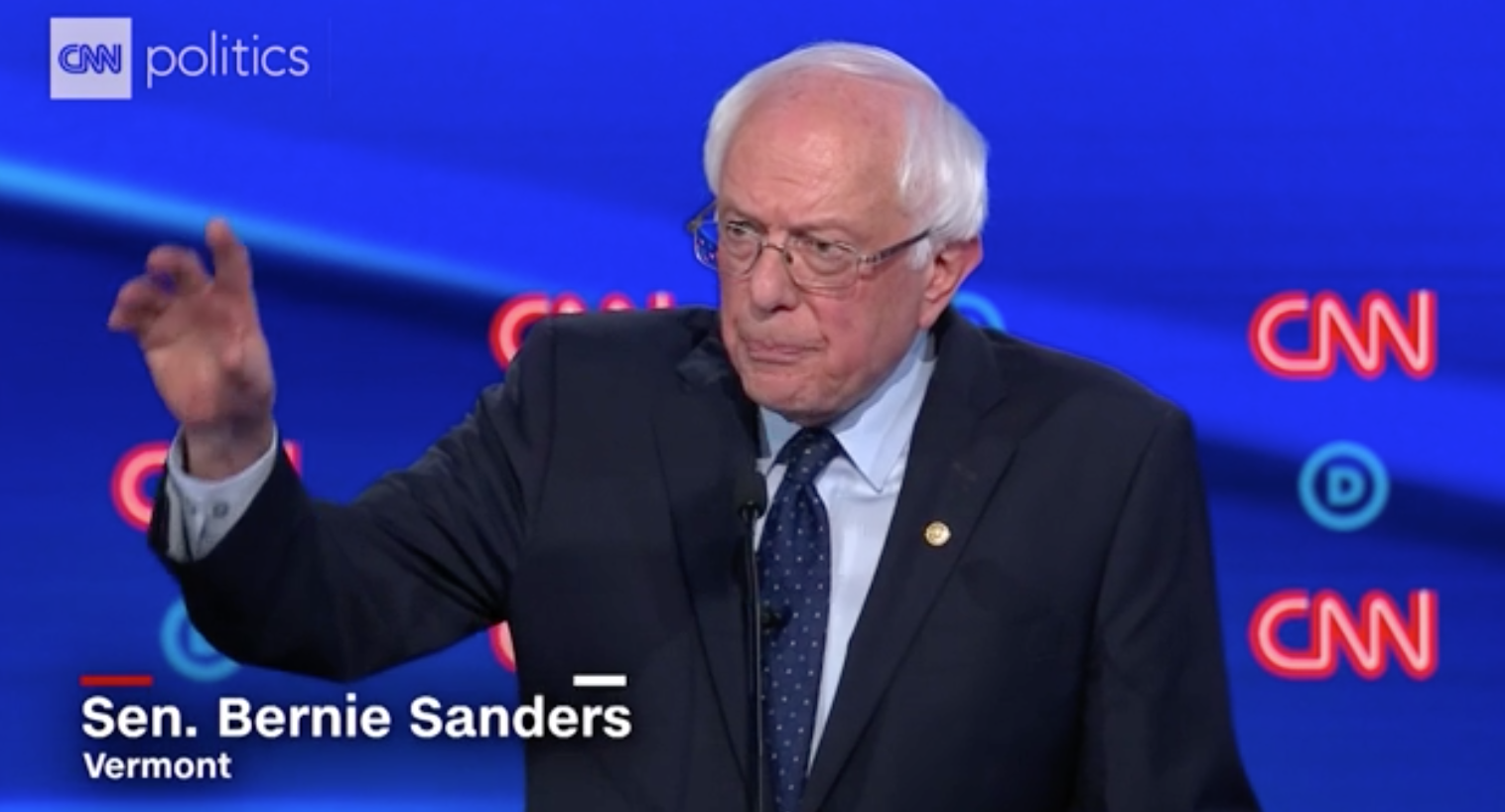 Second runner up: Mayor Pete Buttigieg and his husband Chasten.

We’ll allow him/her to come for dessert only: Rep. Cory Booker (D-N.J.). He probably won’t eat it since he’s a vegan. More for everyone else. He can feast on fruit salad and Kool-Aid.