NXIVM is the Albany, New York-based “self-help” group that in 2017 was exposed of coercing numerous of its female members into becoming sex slaves branded with the initials of its leader, Keith Raniere. A federal jury in New York convicted Raniere in June on numerous charges, including sex trafficking and sexual exploitation of a child. Former “Smallville” actress Allison Mack pleaded guilty in April for the role she played in the sex slave ring.

But cult expert Rick Alan Ross, who has studied NXIVM for more than 15 years, said RCG had nothing to do with teaching languages to children. (RELATED: Former ‘Smallville’ Actress Pleads Guilty To Criminal Activity After Being Part Of Alleged Sex Cult)

“It wasn’t about language. It was about indoctrinating children to be like him. He was the prototype and he was always interested in cloning himself and perpetuating his ideas,” Ross told the DCNF. “So to think that it was only ever simply about being multilingual is incredibly naïve. It was never just about that. It was about him, his philosophy and perpetuating his world view.”

U.S. prosecutors recognized Rainbow Cultural Garden LLC, a Delaware business entity, as being affiliated with Raniere and his teachings in a May 2018 court filing. RCG schools that operated in the U.S. have all ceased operation or, in the case of its Miami franchise, local authorities shut them down for operating as an unlicensed child-care facility.

But despite Raniere’s conviction, his adherents continue to propagate his multilingual educational methods in programs active in France and Guatemala, and it maintains a presence in the United Kingdom, the DCNF’s investigation found.

RCG lives on in France through a company called Athal Education Group, which Sara Bronfman-Igtet and her husband, Basit Igtet, founded and financed, the French news outlet Le Dauphine reported in December 2018.

Bronfman-Igtet is an heir to the Seagram liquor fortune. Her sister, Clare Bronfman, pleaded guilty in April to charges related to her role in NXIVM. Trusts and bank accounts the Bronfman sisters controlled bankrolled Raniere to the tune of $150 million from 2004 through 2010, Vanity Fair reported. 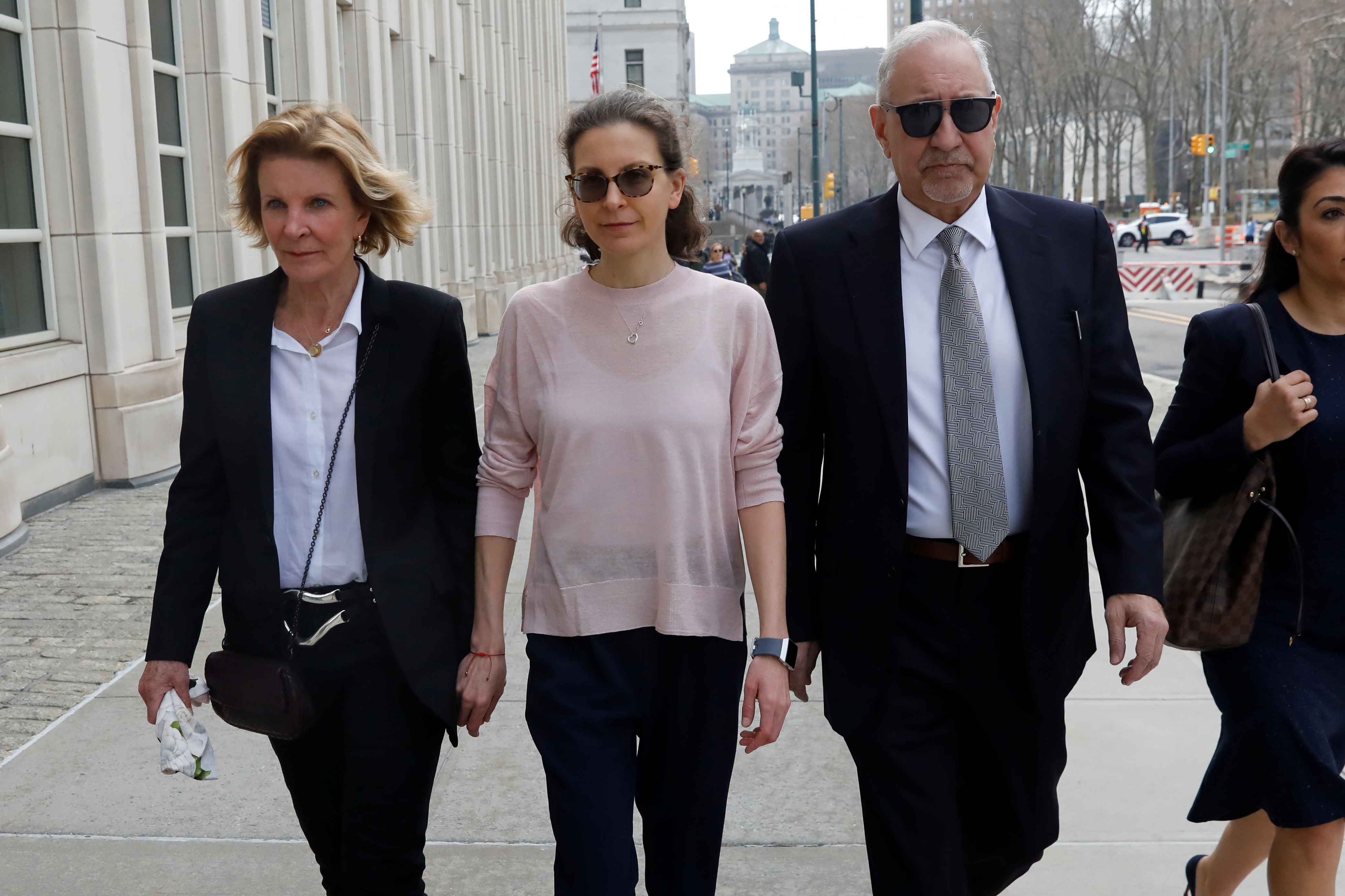 Clare Bronfman, an heiress of the Seagram’s liquor empire, arrives at the Brooklyn Federal Courthouse to face charges regarding sex trafficking and racketeering related to the Nxivm cult case in New York, U.S., April 8, 2019. REUTERS/Shannon Stapleton

Igtet also had deep involvement in NXIVM, having “proselytized” for the cult, BuzzFeed News reported.

U.S. prosecutors haven’t accused Bronfman-Igtet of any crimes, but she is the target of an ongoing class-action lawsuit filed in September 2018 for the role she allegedly played helping Raniere fleece millions from NXIVM clients through its high-priced self-improvement courses, which the lawsuit claims were nothing more than a multi-level marketing scheme.

In December 2018, Athal launched its “Campus Beyond The School” program, which it claims will guide children as young as 2 years old to master their mind, body, expression and world as they are simultaneously taught German, English, Arabic, Chinese, Spanish, French, Japanese and Russian.

The mayor of the French town of Apt, Dominique Santoni, was pictured standing beside Bronfman-Igtet and her husband at the inauguration of Athal’s “Campus Beyond The School,” and the town’s office of tourism helped promote Athal’s holiday camp in April and summer camp in July.

Athal offered to register a child to their summer camp in July when the DCNF first reached out for comment and later declined to comment on follow-up inquiries asking about their connection to Raniere and NXIVM.

Santoni, the Apt mayor, did not respond when asked if she was aware of Athal’s connection to Raniere and NXIVM.

A former NXIVM member, Ariella Menashy, who tried opening her own RCG school in Vancouver, British Columbia, in 2011, told the DCNF that Athal’s program “100% sounds like Rainbow” and that the languages it teaches are the same ones Raniere mandated.

Menashy also said she interacted with Bronfman-Igtet and many of Athal’s employees during her time within NXVIM between 2007 through 2017.

Most notably, Menashy recalled seeing Athal founder Bronfman-Igtet regularly whenever she visited NXVIM headquarters in Albany during the 10 years she was part of the organization. She also said she saw Bronfman-Igtet’s husband once at VWeek, the cult’s annual retreat in upstate New York.

Athal Multicultural Director Edith Alcaino and Arabic teacher Elias Boukhari, both pictured in the September 2018 issue of L’Aptesien, attended a “Family Values Intensive” with Menashy in 2015, Menashy said. The intensive, Menashy explained, was a parenting workshop designed to help people examine beliefs that may hinder their ability to be an effective parent.

Stewart, who was pictured alongside Alcaino and Boukhari in L’Aptesien, states on his blog that he has adopted Raniere as a member of his family.

Menashy said it was sad to learn that so many people continue to propagate Raniere’s ideology following his conviction.

“You have to understand when you leave NXIVM, you’ll never hear from these people again. So I understand if it’s your life — for me it wasn’t, but for these people it is,” she said. “It’s scary.”

“Just stop this ridiculousness of propagating the ideas of a sociopath,” Menashy said. “There’s really no question at this point he has bad intent.”

Ross, the cult expert, said local authorities should shut the program down.

“If there is any school or camp that is connected to NXIVM, the philosophy of rational inquiry, and the ideas of Keith Raniere, parents and families should stay away from those schools and camps and should be made aware of their notorious history,” Ross said. “Child protection officials should be looking very closely at those schools.”

Former NXIVM publicist-turned-whistleblower Frank Parlato told the DCNF that the only devotees of Raniere put their children through the Rainbow Cultural Garden curriculum.

“I think the real thing to focus on, the real terrible thing, is that these kids are being abused,” Parlato said. “Their parents are still believers in Keith’s ideas and greatness.”

“These children are being raised by a series of strangers, who are not high paid, who are speaking to them in different languages every day,” Parlato said. “And the kids don’t get a rest, they don’t get the opportunity to just talk with their mother or be with their father.”

Raniere explained in a 2010 video the importance of having multiple people from different cultures raising children.
“I think our children could have a much better time if they were brought up with three or five different cultures and that they see themselves as something that is beyond those cultures,” Raniere said.

Bronfman-Igtet leads Rainbow Cultural Garden’s U.K. branch and according to its business registration documents, it is majority-owned by Events for Humanity, a U.S.-based business entity prosecutors identified as having ties to NXIVM and Raniere.

Bronfman-Igtet described RCG U.K. as an at-home childcare replacement program for kids between the ages of 3 months to 3 years old, in a July 2017 interview with Quintessentially Education.

Ofsted launched an investigation into the U.K. school in December 2017 when critics highlighted its teaching methods and its ties to Raniere, the U.K. Sun reported. The agency said at the time the allegations were “extremely concerning.”

But an Ofsted representative told the DCNF in June that the agency closed its investigation after determining that RCG U.K. doesn’t need to register with its agency since parents remain in the home with their children while they’re being taught by the program’s multicultural development specialists.

It’s unclear to what extent RCG U.K. remains in operation. Its website and Facebook profiles have been taken down, but the DCNF identified multiple individuals who state on their LinkedIn profiles that they are active employees of the company. Many are tied to Athal’s school in France, including Alcaino, who serves as RCG U.K.’s program director.

Bronfman-Igtet also removed her role as CEO of RCG U.K. from her LinkedIn profile after the DCNF sent press inquiries.

None of RCG U.K.’s active employees responded to LinkedIn messages asking if they were still working with the company.

A school operating in Guatemala City under the name Sunshines Multicultural Academy also appears to be linked to the RCG program. Countless photos and posts on the school’s Facebook page feature the RCG logo and refer to the school as “Rainbow” and the students as “Rainbow kids.”

“Rainbow is the only pre-school where children from 0 TO 6 years old have the opportunity to learn up to 5 languages with native teachers!” reads the translated caption of one such post from April 9, 2018.

The school has not used the RCG logo or made any references to the program on its Facebook page since September 2018 and now appears to go exclusively by its current name. The school made a change to its commercial name in September 2018, a Guatemalan government document shows.

Regardless, Sunshines Multicultural Academy continues to offer a language curriculum similar to that of Rainbow.

“We teach Mandarin, Russian, English (England) and Hindi, with native teachers of the country,” reads a translated email to the DCNF from Sunshine spokeswoman Michelle Luttmann.

Luttmann did not respond when questioned about the school’s apparent connections to Raniere and RCG.

Alexa Secrest contributed to this report.

Editor’s note: This story has been updated to reflect that Athal Education declined to comment nearly 24 hours after this story was published and after it ignored multiple requests over a 2-week period. The declination was sent from an email address associated with Athal, but it did not include the name of the sender. The sender also contradicted themselves during a preceding exchange and repeatedly refused to provide evidence refuting the DCNF’s findings.