The most recent ex-Google engineer who claims to have been fired for his conservative views also suggested raising money under the auspices of the company’s free speech listserv for a bounty to identify Richard Spencer’s assailant, the Daily Caller has learned.

Kevin Cernekee, who was profiled in the Wall Street Journal last week, has made several complaints to the National Labor Relations Board alleging bias against right-wing employees, one of which is moving forward.

“[A] well­ known conservative activist was sucker punched on camera in DC while giving an interview,” Cernekee wrote on the Free Speech listserv in January 2017, referring to Richard Spencer, probably the most famous white nationalist in America.

Two days later, he posted to the same listserv to suggest that members of the free speech listserv at Google should raise money for a bounty to find Spencer’s assailant. The bounty was offered on WeSearchr, a site founded by Charles Johnson. He wrote:

BTW, there is a bounty to track down Dr. Spencer’s assailant:

Should we put together a group donation in the name of “freespeech@Google”? It would be a nice gesture.

Several Googlers pushed back on the request for donations for the WeSearchr bounty. “I can’t believe someone is actually suggesting that we come to the aid of a prominent, vehement racist and anti­-Semite. What the hell does that have to do with free speech?” one wrote.

“Interesting argument, so are you saying it is OK to sucker punch somebody because you disagree with their politics?” Cernekee replied. (RELATED: Documents Detailing Google’s ‘News Blacklist’ Show Manual Manipulation Of Special Search Results)

“This has nothing to do with punching him, and everything to do with you sending money for his ‘bounty fund’. You aren’t
sending him an ice­pack for his black eye, or a card to feel better,” another Googler objected.

The bounty doesn’t go to Dr. Spencer at all. It goes to whoever turns in the criminal who assaulted him. Kind of like Crime Stoppers or the FBI’s reward program.

Wouldn’t you agree that is protective of free speech? People should be able to speak their minds without worrying about getting clocked on the street.

Richard Spencer is not a doctor of anything, as he dropped out of a PhD program at Duke. It isn’t clear why Cernekee uses that honorific twice.

Another Googler objected to having Google’s name attached to something like this, to which Cernekee replied, “Aren’t Googler ERGs [employee resource groups] entitled to free speech? One can find an abundance of other examples where Googlers have taken credit, as a group, for helping their communities (and even for advancing a controversial far­ left political agenda). I am disappointed to see this thread degrading into threats and personal attacks. I thought we were better than that. :­(” 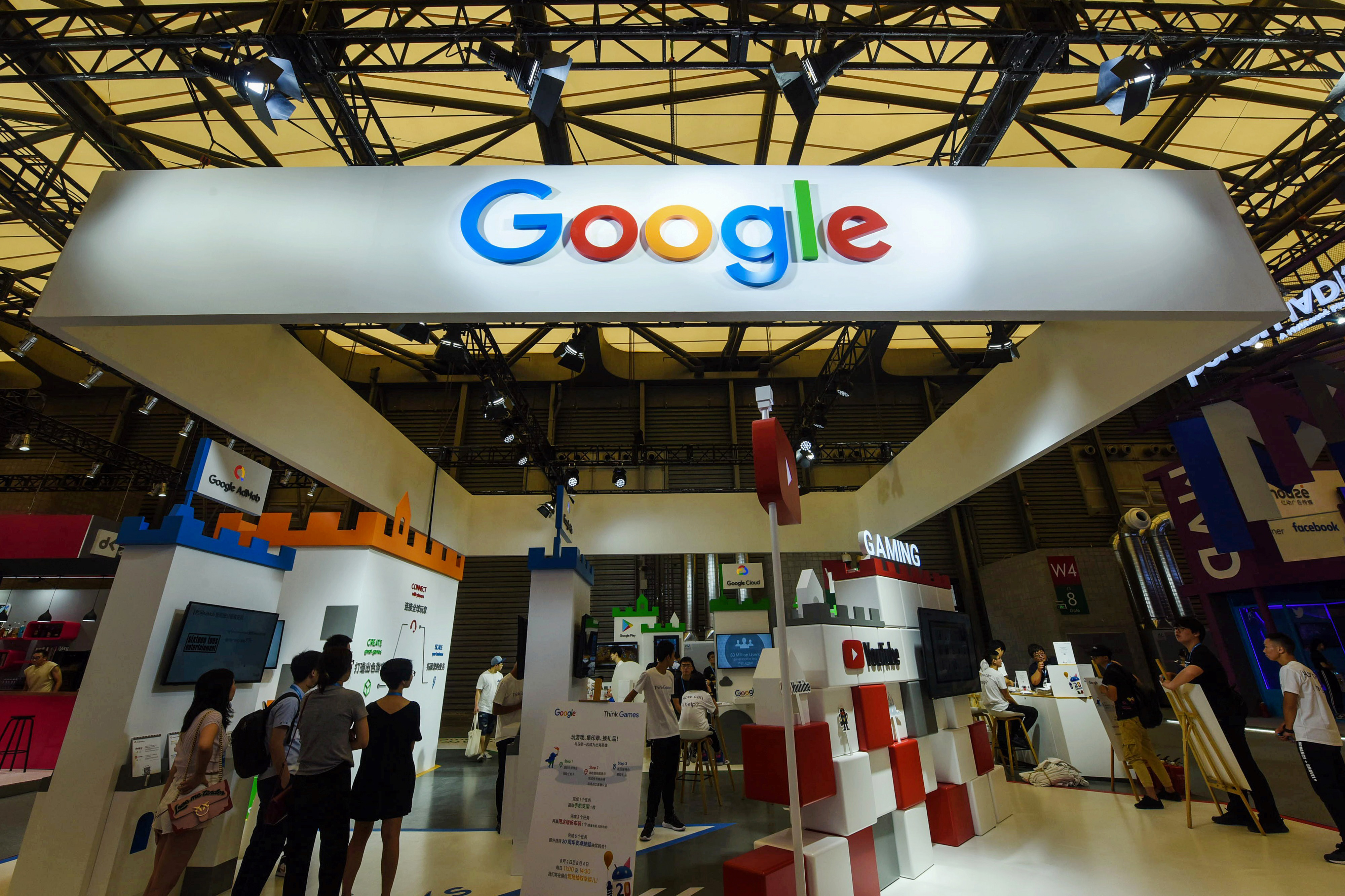 People gather at the booth of Google during the China Digital Entertainment Expo and Conference, known as ChinaJoy, in Shanghai on August 2, 2019. (Photo by STR/AFP/Getty Images)

In another set of postings from June 2016, Cernekee responded to a CNN article about a brawl in Sacramento between the Traditionalist Workers Party and the Golden State Skinheads, and antifa.

“Wait, were these actual neo­-Nazis or something else? From what I can tell TWP is more of a separatist organization and they openly reject racial supremacy,” Cernekee wrote on June 27, 2016.

Another poster clarified that it’s fair to call the Golden State Skinheads a neo-Nazi group, given their branding and stated views.

Thank you, I missed that detail. Catching up on news coverage of the event, I started wondering: why is the American nationalist Right so terrible at branding?

In this situation the GSS stood up for free speech and free association. They defended a peaceful, non­hateful gathering against antifa who showed up armed with bricks, bats, and knives ­­ a clear sign of premeditated violence. The antifa group’s own posters stated that “This is not a protest. This is a shut down.” Per ABC 10 in Sacramento: upon seeing any sign of a suspected “Nazi” the antifa crowd immediately charged them and attacked.

Now I’m the farthest thing possible from a Nazi, but seeing people hunted down and assaulted just for existing makes me extremely uncomfortable, as does the racially based targeting. That’s not who we are as Americans. I have many unpopular opinions myself, and I’d hate to think that is enough to put me in physical danger someday. The right to peacefully disagree is fundamental to our way of life.

The term “skinhead” has a lot of unfortunate baggage and allows members to be painted as aggressors even in cases where the opposite is true. Why not rename themselves to something normie­-compatible like “The Helpful Neighborhood Bald Guys” or “The Open Society Institute” instead of trying to change the near­-universal negative perception of their old label (which is futile)? This would make it much easier to form alliances with other supporters of liberty and civil rights. The only thing I could figure is that they value having an edgy badass image over mainstream acceptance.

Cernekee was described in the Wall Street Journal’s headline as a “Republican Engineer,” though the article notes that he was described as “the face of the alt-right” at Google by Mike Wacker, a conservative engineer who was also fired from the company recently. Conservatives angry at big tech may view such postings as a cautionary lesson in the importance of vetting their cause célèbres. (RELATED: Google Fires Republican Engineer Who Spoke Out Against ‘Outrage Mobs’)

Cernekee was reached for comment but as of press time has not responded to questions about his characterizations of both the Golden State Skinheads and Richard Spencer.

Update: Cernekee provided the following statement to The Daily Caller after publication:

These are false and baseless smears from a jealous and vindictive ex-colleague. I have always supported free speech and opposed white nationalism. I addressed these smears in more depth here. To that point, I occasionally defended the free speech of extremists, and I frequently spoke out against Antifa mobs who supported shutting down political discussion through force. When the infamous white nationalist leader Richard Spencer was sucker punched in the face during an interview, several Googlers openly defended the violent act and took to internal company forums to promote the idea the “Nazis deserve to be punched.”

While I strongly disagree with Spencer’s views, I found this precedent absolutely horrifying, and I spoke out. I also spoke out against a masked gang of Antifa thugs who violently attacked a skinhead group. I would have unabashedly defended far-left activists if violent right wingers had attacked them. I have been steadfast in maintaining that the rule of law and the right to peacefully protest are cornerstones of our society.

Unfortunately, very few Googlers adhere to the maxim “I disapprove of what you say, but I will defend to the death your right to say.” Instead, they believe that defending free speech of despicable fringe characters means you must agree with them. For merely opposing Antifa violence, I was routinely accused of being “Alt Right” despite never endorsing those positions.

I firmly believe that once political violence and censorship are normalized as acceptable tactics, there is no stopping point and America’s political situation will turn extremely ugly. In just the last few days, three Democratic presidential candidates have described the President as a White Nationalist. Antifa have justified attacks on mainstream conservatives such as Tucker Carlson and Andy Ngo on the grounds that they are fascists. Conservative gatherings are routinely attacked by masked thugs, who operate with impunity and shut down the debate by force.

In the wake of the violent despicable, horrific, and racist mass murder in El Paso, the media will undoubtedly advance a narrative that concerns about Antifa violence should be disregarded. There is no question that murdering dozens of innocent people due to their race is exponentially worse than dousing politicians with sticky milkshakes. Yet this doesn’t make the latter an acceptable form of protest.