The Federal Bureau of Investigation investigated at least 14 employees since 2016 for unauthorized disclosures of bureau information and fired at least four, according to documents released Tuesday.

Several of the FBI employees were recommended for termination, but received lighter punishments, such as suspension without pay.

The documents, which are six pages of summaries of the 14 internal investigations, do not reveal the specifics of each unauthorized disclosure. The summaries are heavily redacted, and include only details of the ultimate decisions of the investigations and when they were closed.

Judicial Watch obtained the records as part of a Freedom of Information Act lawsuit.

He also suggested that one of the investigations involved Andrew McCabe, the former deputy FBI director who was fired for lying to FBI investigators about authorizing leaks to the press about the investigation of Hillary Clinton.

“And even though Andrew McCabe was fired and referred for a criminal investigation for his leak, no prosecution has taken place,” Fitton said. (RELATED: IG Report: FBI Agents Regularly Received Handouts From Reporters)

The documents released Tuesday do not identify McCabe. But the first investigation referenced in the reports matches up closely with what is known of the McCabe probe.

McCabe was fired March 16, 2018,  after the FBI’s Office of Professional Responsibility (OPR) and the Justice Department’s inspector general found that he lacked candor during multiple interviews about his authorization of disclosures to the press. McCabe authorized a top aide, Lisa Page, to speak to a Wall Street Journal reporter in October 2016 for an article about the FBI’s investigations of Hillary Clinton. The article revealed previously unreported details about the FBI’s investigation of the Clinton Foundation. 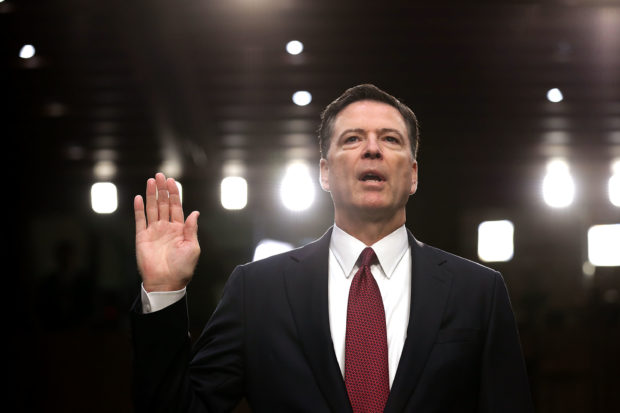 The summary says that the official had a “remarkable performance record” and “was facing unprecedented challenges and pressures” at the bureau. But the report said that the official’s lack of condor was “incompatible with the FBI’s Core Values.”

Another investigation, which was closed June 6, 2017, found that a senior executive at the FBI misused a bureau database and provided sensitive information to a former FBI employee.  OPR recommended that the employee be suspended without pay for 15 days, but they ultimately received a letter of censure.

Republican lawmakers have focused heavily on FBI and Justice Department leaks, especially regarding the Trump-Russia investigation. It is unclear from the new documents whether any of the 14 investigations involved information related to that probe.

On May 29, the Justice Department’s inspector general said that a former FBI official was investigated for having “dozens” of unauthorized media contacts, and accepting gifts from a reporter. The official, who was not identified, was allowed to retire from the bureau.

The inspector general revealed on Oct. 16, 2018 that a senior FBI official received sports tickets from a national TV journalist, “in violation of federal regulations.”

The Justice Department declined prosecution of the official, who also retired.

James Comey, the former FBI director, was also investigated for potential mishandling of classified information. The probe centered on memos that Comey gave to a friend shortly after he was fired on May 9, 2017 as FBI chief. Comey testified on June 7, 2017 that he shared the memos, which were summaries of conversations he had with President Trump, in order to force the appointment of a special counsel.

Horowitz determined that two of the memos that Comey gave his friend contained information that the FBI deemed to be classified. But the Justice Department decided not to prosecute Comey for mishandling classified information, reportedly because there was not enough evidence he willfully broke the law.