CNN contributor Reza Aslan appeared to be calling for political genocide against conservatives Sunday, adding to his long list of violent tweets.

After singling out Kellyanne Conway as “‘the depraved evil’ we need to eradicate,” Aslan doubled down on his call for killing, saying anybody who supports President Donald Trump should be “eradicated.”

This is not the first time Aslan has threatened conservatives with bodily harm via Twitter. In January, at the height of the media firestorm surrounding the Covington Catholic students, Reza fantasized about assaulting a MAGA hat-wearing high school boy.

Honest question. Have you ever seen a more punchable face than this kid’s? pic.twitter.com/jolQ7BZQPD

When conservative author and documentary producer Dinesh D’Souza criticized Aslan’s hateful rhetoric directed at a minor the CNN contributor fired back, saying he’d like to assault D’souza as well. Aslan has since deleted that tweet. 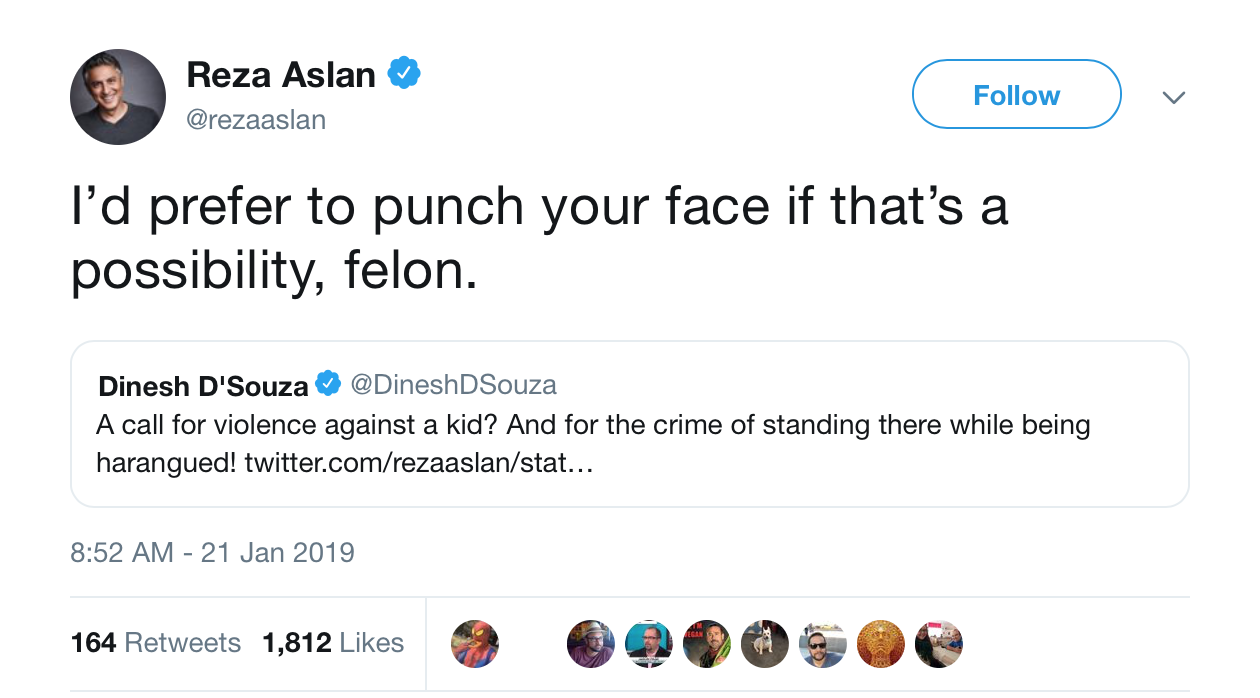 Earlier this week, the Daily Caller reported how Aslan maintains relations with the government of Iran, denies the extremism of the Muslim Brotherhood in Egypt and is known for giving commentary that favors radical Islamists from his position as “a scholar of religions.” Aslan’s Ph.D. dissertation examined “Global Jihadism as a Transnational Social Movement.”

RELATED: Reza Aslan misrepresents his status as scholar of ‘religions’; downplays his ties to extreme Islamists

In 2017, CNN premiered its first episode of a show called “Believer,” hosted by Aslan as he traveled the globe, exploring world religions. During the first episode of the new show, Aslan consumed portions of a human brain with a remote extremist denomination of Hindus known as the Aghori according to the Washington Post.

Aslan then joked about the experience, asking his Facebook followers if they “want to know what a dead guy’s brain tastes like.”

CNN “decided to not move forward with production” of “Believer” just months after it first aired, citing Aslan’s profane Twitter account as their reason for cancellation.