MSNBC featured a tweet Wednesday from Media Matters’ Bobby Lewis — but the displayed graphic included Twitter’s “verified” blue check, which Lewis does not actually have. 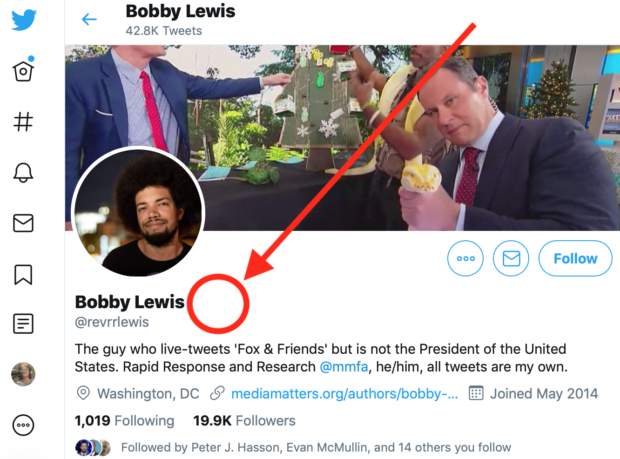 Trump friend and radio host Michael Savage says he “was very disappointed in the president attacking white supremacy,” and predicts that it will “cost [him] thousands, if not tens of thousands of votes.” https://t.co/JPOgAXbwaO

The full quote, which makes it clear that Savage’s concern is that the president made a statement in facilitation of the leftist narrative that conflates everyone who is worried about illegal immigration with white supremacists, is as follows:

I was very disappointed in the president attacking white supremacy. He is now saying everyone who is concerned about the illegal alien invasion is a white supremacist? He suddenly has joined who? He’s like Jake Tapper now, and the rest on CNN. That was a mistake, Mr. President. I am sorry. That is going to cost you thousands, if not tens of thousands of votes.

People began commenting as soon as the segment ran, some joking that if MSNBC “verified” Lewis, Twitter ought to follow suit.

It’s only fair if @MSNBC gives @revrrlewis the check mark that Twitter @verified does the same, right? pic.twitter.com/3omvbRVuWL

And several quickly lobbied for Twitter to make it official.

Lewis, who does Rapid Response and Research for Media Matters, and appears to spend most of his time on Twitter live-tweeting “Fox & Friends” on a daily basis, seemed to be amused by the whole scenario. “This is the closest i’ll ever get to being verified,” he tweeted.

this is the closest i’ll ever get to being verified https://t.co/VEw4jsx1B0

As to how that blue checkmark appeared in MSNBC’s graphic? Maybe a photoshop, maybe a standard tweet template. Either way, it’s fake news.