In the wake of two mass shootings in El Paso, Texas and Dayton, Ohio, the White House and President Donald Trump have been pressured into discussing gun-grabbing legislation that some believe could prevent future shootings.

Democrats are known to take advantage of tragedies to push for gun control, but now the president’s willingness to explore red flag laws and universal background checks has raised concern among conservatives in Congress and the administration. In a strange attempt at bipartisanship last week, Trump suggested tying gun control efforts to immigration reform in order to make sure conservatives still receive a win on the issue.

However, recent developments in the White House suggest there is a larger appetite for straight-up gun legislation as opposed to some kind of compromise.

Murphy’s name should set off the loudest warning bells for Second Amendment advocates, as he is a cosponsor on California Democratic Sen. Dianne Feinstein’s 2019 “assault weapons” ban legislation. Feinstein’s bill would introduce a ban on semi-automatic weapons that have so-called “military style” attachments, such as the ability to accept a magazine that holds more than 10 rounds, a barrel shroud, a pistol grip, or other features. It also specifically bans AR-15 rifles, the most popular rifle in the United States. (RELATED: Gun Expert Shoots Down Biggest AR-15 Myths) 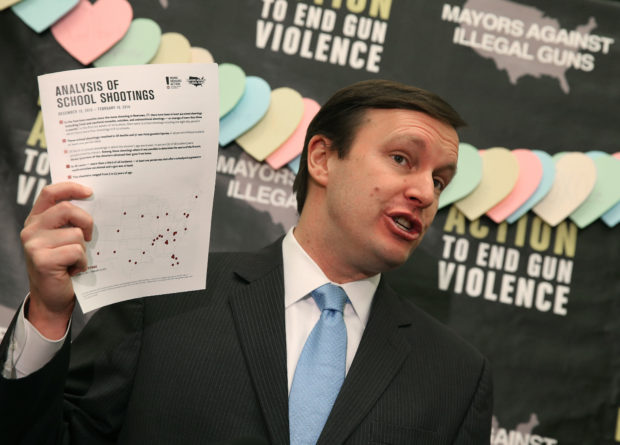 Meanwhile, the other two senators involved in talks with the White House, Manchin and Toomey, have been pushing to expand commercial background checks, a measure that previously failed to gain enough Republican support in the Senate.

“There’s an appetite, and I mean a very strong appetite, for background checks,” Trump said last week, however, signaling support for such legislation.

Toomey and Manchin’s bill would require background checks on gun sales made by unlicensed dealers at gun shows or on the internet, but would exempt transfers between family and friends from background checks.

Another player in the gun talks not cited in the Politico report is South Carolina Republican Sen. Lindsey Graham, who visited the president in Bedminster, New Jersey last weekend to play a round of golf. Graham recently discussed “red flag laws” with Trump, telling Fox News, “I think there’s a determination by the president to act this time to create a grant program at the federal level to help local law enforcement to keep guns out of the hands of dangerous people.”

Graham assured that his proposal for red flag laws with Connecticut Democratic Sen. Richard Blumenthal would ensure “due process” by only taking guns from mentally ill or otherwise “risky” individuals after a hearing with a judge. 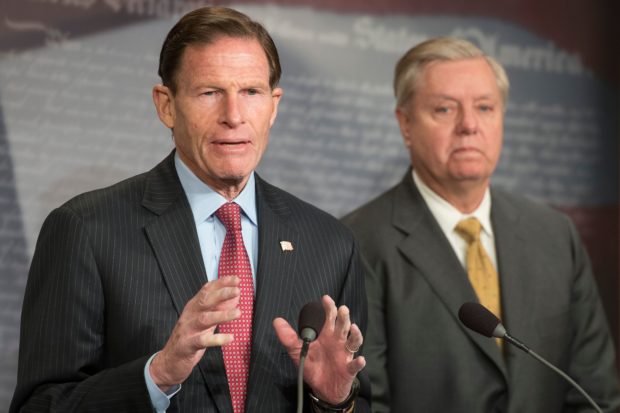 Red flag laws were also endorsed by Trump, with the president stating, “We must make sure that those judged to pose a grave risk to public safety do not have access to firearms, and that, if they do, those firearms can be taken through rapid due process. That is why I have called for ‘red flag’ laws, also known as extreme risk protection orders.”

It is unclear the exact language in Graham’s latest proposal, but the 2018 version of his red flag bill gave federal courts the ability to issue protection orders against individuals after complaints from law enforcement officers or family members. The orders are approved and renewed a majority of the time, and are issued under relatively vague standards.

“The concept of a “red flag” law — which permits the confiscation of lawfully owned weapons from a person because of what the person might do — violates both the presumption of innocence and the due process requirement of proof of criminal behavior before liberty can be infringed….

…The Republican proposal lowers the standard of proof to a preponderance of the evidence — ‘a more likely than not’ standard. That was done because it is impossible to prove beyond a reasonable doubt that an event might happen. This is exactly why the ‘might happen standard’ is unconstitutional and alien to our jurisprudence.”

Trump demonstrated the dangers of red flag laws in his own tweet on the subject, asserting that CNN anchor Chris Cuomo may be subject to a red flag order because of his outburst against an individual who called him “Fredo.”

Would Chris Cuomo be given a Red Flag for his recent rant? Filthy language and a total loss of control. He shouldn’t be allowed to have any weapon. He’s nuts!

Even though the president has offered some support for expanded background checks and red flag laws, Democrats will still likely be unsatisfied with his show of reaching across the aisle and will demand further gun control. Just this week, Democrats demanded the president support and the Republican-led Senate pick up H.R. 8, a universal background check bill. The bill would criminalize nearly all private sales without a background check and also many loans of firearms between friends and family.

David Volokh, writing at Reason, details many everyday scenarios which would be captured by the background check bill. For example, “The family exemption vanishes if one family member pays the other in any way. If a brother trades an extra shotgun to his sister in exchange for her extra television, both of them have to go to a gun store. Their exchange will have all the fees and paperwork as if she were buying a gun from the store.”

The bill passed in the House but only captured eight Republican votes, and Senate Majority Leader Mitch McConnell has made no mention of bringing it to the majority-Republican Senate floor. McConnell also declined to come back early from August recess to push gun control measures, telling a Kentucky radio station, “We’d just have people scoring political points and nothing would happen. There has to be a bipartisan discussion here of what we can agree on.”

Some Republicans have pushed back on concerns that the White House could be moving toward Democratic-backed gun-grabs, painting the current situation as another scenario where the Democrats take advantage of Republicans’ openness to incremental change. (RELATED: Kamala Harris Appears To Suggest Her Gun Control Plan Might Have Stopped Attack On Philly Cops)

“Your biggest chance for a sweet spot is beefing up due process protections for existing red flag proposals — conservatives could possibly get on board with something like that,” a GOP aide said. “But that’s assuming Democrats would take a ‘small victory”’or incremental win, and I doubt they would. They think this is a moment and want to do something sweeping.”

The aide also expressed optimism that any proposal with “serious conservative pushback” would ultimately force Trump to back down to avoid angering his base.