President Donald Trump is radically scaling back planned cuts to foreign aid amidst pressure from Secretary of State Mike Pompeo, potentially rankling conservatives who view the programs as an easy way to trim away at wasteful government spending.

A senior administration official confirmed to the Daily Caller last week that the Office of Management and Budget (OMB) and the State Department were working together to put together a $4 billion rescissions package containing cuts to various foreign aid programs. Programs likely to be affected by the cuts included funding for solar panels in Central Asia, crop diversity in Bangladesh, strengthening and controlling other countries’ borders in the Pacific and East, South, and Central Asia, and prison reform in Guatemala. (RELATED: Trump Administration Looking To Cut Foreign Aid Programs)

However, Trump has agreed to limit the cuts to just a few hundred million dollars at the urging of Pompeo and Treasury Secretary Steve Mnuchin, Bloomberg reported on Tuesday. A person familiar with the situation told the Caller that the president was likely trying to help Pompeo avoid political backlash from officials who would have to explain the cuts to world organizations and foreign governments.

“Trump wants to cut more, but he values Pompeo,” the person familiar explained. “Pompeo doesn’t want to sell this internally at [the State Department] or with ambassadors.” 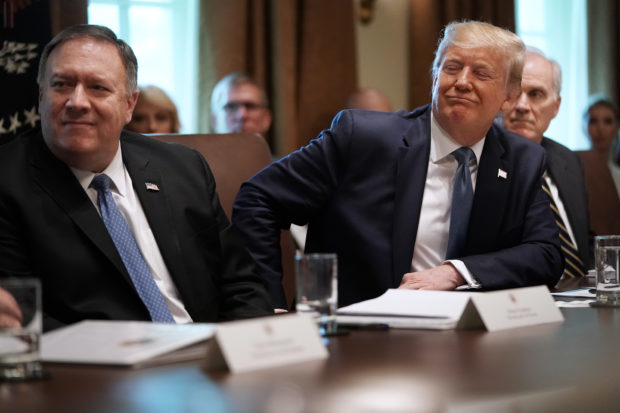 WASHINGTON, DC – JULY 16: U.S. President Donald Trump listens to a presentation about prescription drugs during a cabinet meeting with Secretary of State Mike Pompeo (L), acting Defense Secretary Richard Spencer and others at the White House July 16, 2019 in Washington, DC. Trump and members of his administration addressed a wide variety of subjects, including Iran, opportunity zones, drug prices, HIV/AIDS, immigration and other subjects for more than an hour. (Photo by Chip Somodevilla/Getty Images)

The reduction in cuts will likely be unpopular with budget hawks, who believe foreign aid is one area in which the Trump administration can tighten its belt.

“We were frustrated by the inability of the Senate to pass last year’s rescissions package. We are, of course, disappointed that the White House may scale back the rescissions package that will be proposed to Congress. Still, this news doesn’t come as a surprise,” FreedomWorks, a conservative activist group focused on limited government, told the Caller in a statement. “Although we support spending cuts as a general rule, it’s not lost on us that these rescissions packages came after the passage of budget deals that busted the spending caps by roughly $620 billion over four fiscal years.”

Further complicating matters is that Republicans are pushing Pompeo to leave the administration and run for Senate in Kansas in the hopes of crowding out fellow pro-Trump Republican Kris Kobach. Pompeo was listed Tuesday as a featured guest at a New York City luncheon with a group of fiscal conservatives who likely would scoff at his pulling back on the rescissions package.

POMPEO is listed as a featured guest at what’s being described on invitations as a briefing and luncheon in NYC with JOHN CATSIMATIDIS, Art Laffer, Steve Forbes and Steve Moore, per ppl briefed on the plan. That group is known for being interested in pro-growth candidates.

In fact, Club for Growth, a economics-based conservative organization co-founded by Moore, initially celebrated Pompeo’s “principled” approach to spending in a tweet Sunday — before the rollbacks to the rescissions package.

“He’s a principled conservative who doesn’t believe in wasteful spending and it has nothing to do with what he does next,” Club for Growth said, pushing back on rumors that the cuts to foreign aid were a tactic to raise Pompeo’s profile for a Senate run. The group did not respond to a request for comment on Pompeo’s latest move to scale back the cuts.

Real reason – he’s a principled conservative who doesn’t believe in wasteful spending and it has nothing to do with what he does next. https://t.co/cbpOE5XErv

“Pompeo would be wise to champion the cuts as he seems to be aiming for another office. I’m not sure how being popular in Foggy Bottom would help him in Kansas,” a person familiar asserted, adding that funding such foreign aid programs is “indefensible” outside of Washington, DC.

The Trump administration similarly prepared a $3.5 billion rescissions package in August of last year, but also pulled back after pushback from Pompeo and bipartisan dissent from lawmakers.