One of the best ways to accurately shoot close targets is to become proficient shooting long range. By slowing down and shooting at targets over 350 yards allows you to focus on sight picture, breathing control, trigger squeeze and overall shooting form. Creating that muscle memory will then increase your ability to engage near targets quickly and accurately. That may be a reason why the popularity of long-range shooting or precision shooting competition (PRC) has boomed over the last few years. However, a lot of shooters will make several mistakes as they start shooting long-distance or perpetuate bad habits. Let’s look at the top 7 mistakes made when shooting long range whether you are just starting out or have been in the long-distance shooting game for a while.

Throwing Money At The Problem

We all know that there was a time when quality and accuracy demanded a price tag to match. However, those days are being challenged by several offerings that could be viewed as budget options. We are also finding that an expensive rifle does not automatically make a shooter’s skill better. That is not to say that a $800 rifle will perform equally as well as a $2000 rifle; however, you will have the ability to at least be competitive. Rifle and ammunition technology have made a $1000 rifle and scope set up easily capable of hitting a mile depending on the shooter’s abilities. So, spending $2-3000 may get someone more consistent impacts on far targets but may not be accessible or needed by all. Some PRCs may only have targets ranged to 800 yards and that would be more in line with the capabilities of a sub $1000 rifle.

Your Scope Should Cost As Much As Your Rifle

A lot of people believe that a “good” long range scope should cost as much as your rifle, if not more. That is simply not true. Over spending on a scope may impact your ability to afford ammunition to practice, compete or hunt. Many manufacturers are looking to target the segment of the market that cannot afford scopes that cost over $1800. Manufacturers like Primary Arms have offered several optics that are feature packed and financially feasible. Japanese HD glass is cheaper and easier to source for many companies allowing for more competition in the scope market. Improvements in reticle technology and the understanding of how to shoot further has made some budget scopes very capable of reaching a shooter’s goals. You will need to invest some money, but you definitely will not need to take a second mortgage to do so.

Once you have picked out the brand of scope for your rifle, you will need to decide which of measurement you will use. One critical error shooters make is deciding to use MOA or MRAD and are then unable to understand how to apply it to shooting long-distance. Also, in some cases, an optic will have a reticle set in MRAD but the turret adjustments are in MOA. This causes added confusion when making corrections to windage and elevation. Knowing the differences between the two different measurement systems, and how to apply those while shooting, will greatly increase your ability to calculate unknown distance and make shot adjustments on the fly.

For a long time, it was believed that .308 WIN was the most versatile round that coupled distance, round stability and power. As innovations in ammunition creation has progressed, new calibers like the 6.5 Creedmoor has challenged the king’s reign. But, choosing a cartage based on popularity alone could be a stumbling block. Other new rounds like the 6mm Creedmoor, .224 Valkyrie, and 6.5 PRC are gaining in popularity; however, will lack in ballistic data, rifle options to shoot from, and offerings in various bullet weights to match your rifle setup. Some research may be needed before choosing the round and rifle combination to fit it to your requirements.

Seeing Life At An Angle

One of the most important pieces of preparing your rifle to shoot distance is properly mounting your scope. In addition, maintaining that level while shooting is also very important. If your rifle is canted while shooting at distances over 660 yards it will have an adverse impact on round placement down range. There is nothing wrong with having a gunsmith mount your optic if you are inexperienced. Adding a scope level to the side of your optic will also assist in keeping your rifle plumb.

Until Your Blue In The Face

Practicing good form and follow though on your shots will inherently make you a better shooter regardless of the application. Some believe that you should hold your breath after you inhale or exhale. While that can be a technique that will work for targets under 200 yards, it can affect your ability to hit targets further away. Holding your breath will cause your heart rate to increase or beat harder. The harder your heart beats the more jump you will see in your reticle. Slowing your breathing down with long controlled breaths and timing your trigger squeeze that the top, or bottom, of your breath will allow you to be more consistent.

Learning to read the wind is just as important as is shooting form. Most shooters will find that shots at known distances are missed due to wind drift. Wind speeds can vary from where you are shooting from as opposed to where the target is. Understanding how to interpret what the wind is doing and applying it to your shot can greatly reduce the frustration of chasing misses.

This list is not all encompassing, and some may find that they have different challenges as they try to become proficient at shooting long-distance. But, hopefully it has allowed you to see some potential progression from where you began or make you think about improving in other areas. The biggest take away should be to practice as often as you can. While range time may be limited, working on your shooting form at home with dry fire practice can be a major benefit. Regardless what your challenges are, train hard until you are at the level you want to be and then practice some more.

Mark Grimsley is a former U.S. Army Officer that started his career as an enlisted Abrams crewman. He has served in 3 overseas tours that include Korea in 2002, Iraq in 2003 as a tank gunner and Afghanistan in 2010-11 as a logistics officer. He completed numerous schools in the Army to include Air Assault and Airborne. Currently, Mark is an Army spouse and enjoys running a YouTube channel.

Click here to see more of Mark’s work on iOutdoorPursuit.com. 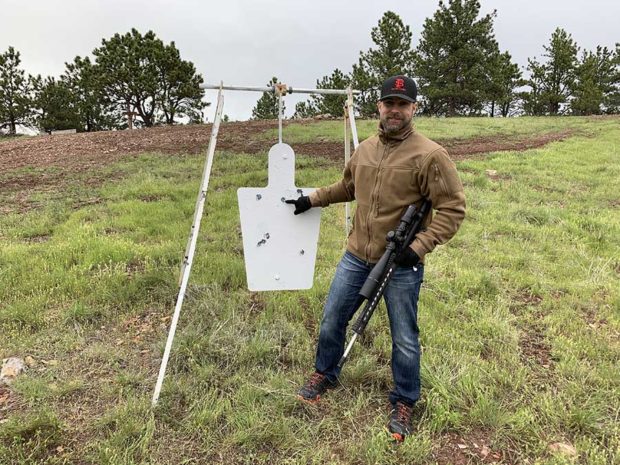 Shooting from one mile!