In a follow up tweet, she wrote, “Also, if they are losing their minds over three Muslims in a body of 535, wonder what happens when there is 20 or more.”

Also, if they are losing their minds over three Muslims in a body of 535, wonder what happens when there is 20 or more ???? https://t.co/QwN9apFHUB

This comes after Rep. Brooks appeared on an Alabama radio show and said that Democrats’ alleged anti-Israel rhetoric is the result of “the growing influence of the Islamic religion in the Democratic Party ranks.” (RELATED: Ilhan Omar Blows Off Al-Qaeda, Mocks Americans For Fearing Them In Recently Surfaced Video)

“Keep in mind, Muslims more so than most people have great animosity towards Israel and the Jewish faith,” Brooks said.

“And as you have more and more Muslims in the United States, as they gain greater and greater influence in elections, particularly in Democratic Party primaries — then you’re going to see more and more people like Ilhan Omar, Rashida Tlaib and company that are anti-Israel, and that brings an entirely different viewpoint into the United States Congress.” (RELATED: Rep. Ilhan Omar Describes 9/11 Terror Attacks: ‘Some People Did Something’)

He also predicated that the party as a whole could “become very strongly anti-Jewish and anti-Israel.” 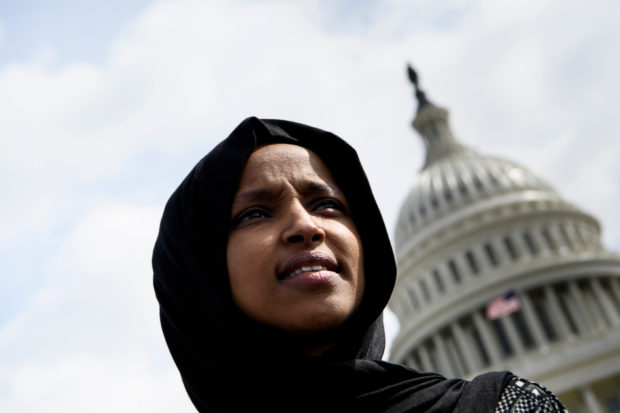 US Representative Ilhan Omar attends a youth climate rally on the west front of the US Capitol on March 15, 2019 in Washington, DC. BRENDAN SMIALOWSKI/AFP/Getty Images

Omar’s position on Israel and her rhetoric on the issue has prompted a number of allegations of anti-Semitism.

Among other statements, the 37-year-old has said that American politicians who are strongly pro-Israel have an “allegiance to a foreign country.” Omar is also a supporter of the Boycott, Divestment, and Sanctions (BDS) movement.

Just this week, she again revisited the issue, saying that she is “accounting for and learning from my own mistakes to become a better ally.”

However, she also warned against “false equivalences” between her statements and President Trump’s, who she claims espouses “open bigotry and hatred” against a many groups including Jews.

That’s why it is sickening to watch people make false equivalences between the open bigotry and hatred of this President and progressives.

President Trump has spoken out against Omar and other Democrats over their rhetoric on Israel. In March, he accused the Democratic Party of becoming “anti-Israel” and “anti-Jewish.”