“Breaking — There are bedbugs in the NYT newsroom.”

Slate’s Ashley Feinberg: “If you work at the New York Times and see a bed bug, please send a photo immediately … To be clear, this is for Times staffers only. I don’t want to see the shit crawling around your apartment TY.” Read her story here.

MOOD: George Conway, Kellyanne Conway‘s hubby, with some campaign advice for the Dems: “As I’ve said, anyone opposing Trump in the primaries or in the general should be consulting with mental-health professionals on how to accelerate [President] Trump along the self-destructive psychological path on which he’s headed. There is at least one candidate who gets it.”

CNN’s Oliver Darcy is filling in for Brian Stelter, who is on paternity leave but is annoyingly weighing in on everything. Stelter claims the distance is giving him a clearer perspective on President Trump, but please, who really believes that shit? More importantly, Darcy really screwed up the newsletter Sunday night. He took the time to ding The Daily Caller News Foundation, but two graphs later, wrote a really dumb, incoherent item about “Katie Hunt.” So-called “Katie Hunt” is, of course, MSNBC’s KASIE HUNT. I’m not sure where he was going with “on night.” But keep up the good work, Darcy! XOXO. (RELATED: Brian Stelter Ruins His Coworker’s Birthday) 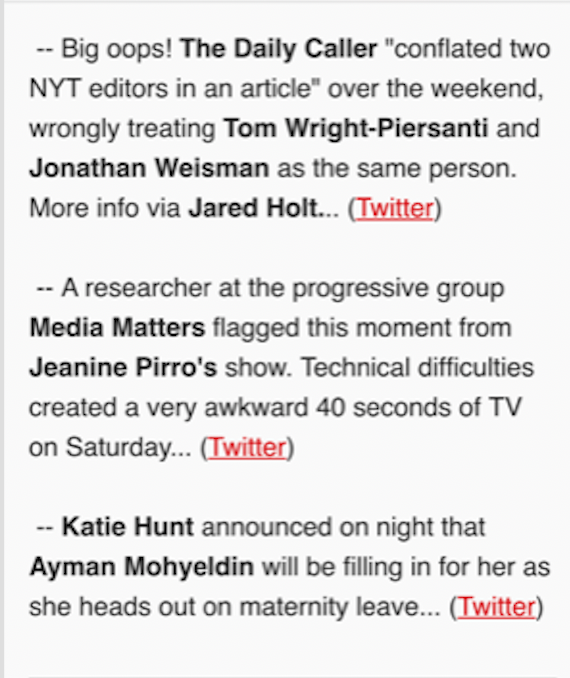 “Kind of tempted to make that deep fried bbq chicken deep dish quesadilla pepperoni pizza tonight. …I expected to like it in a gross-good kind of way. But the mixture of the sweet bbq sauce, the pizza sauce and the dill sour cream. Truly one of the most vile things I’ve ever eaten. I’m not taking any further questions.” — Shay Spence, food editor, People.

Washington Examiner gives itself its own happy ending … Here.

Rudy Guiliani is nothing if not self-aware. He calls Chairman Adam Schiff (D-Calif.) an “empty suit” and questions Joe Biden‘s mental health. Hilarious. “True empty suit. Where’s the direct evidence of collusion? There’s none. And why no consequences for this lie.” — Trump’s lawyer, Rudy Giuliani, lacking correct punctuation,  in a response to Schiff, who tweeted about how much work the Dems are doing and how little Senate Maj. Leader Mitch McConnell is doing. (“Mitch McConnell? He’s busy doing … nothing,” Schiff writes.)

Also there’s this doozy: “Look at his eyes. There’s some serious signs of significant cognitive impairment in a guy who was really always intellectually challenged as a younger man. This is a media created and protected whatever. It’s pathetic and dangerous.”

This is a tweet from Giuliani dated March 24, 2019: “ivesssapology for a video which is allegedly is a caricature of an otherwise halting speech pattern, she should first stop, and apologize for, saying the President needs an “intervention.” Are”

This is the apparent translation which he wrote in another tweet: “Nancy Pelosi wants an apology for a caricature exaggerating her already halting speech pattern. First she should withdraw her charge which hurts our entire nation when she says the President needs an “intervention. “People who live in a glass house shouldn’t throw stones.”” (Punctuation: HIS.)

If you think it’s perfectly OK for Giuliani to be assessing anyone else’s mental health, watch this.

Also, here’s Giuliani weighing in on ex-White House Press Secretary Sean Spicer‘s upcoming performance on ABC’s “DWTS.” He tweeted, “Count me in on the action I’m backing Sean Spicer as the next Fred Astaire or John Travolta.” (RELATED:  ‘DWTS’ Host Tom Bergeron Is Pissed Sean Spicer Made The Cut)