Reporting from The New York Times in 1988 suggested Amazon fires were manmade, linked to global warming and might wipe out the entire rainforest — claims similar to those made today regarding August Amazon fires.

The estimated remaining forest cover in the Brazilian Amazon was 3,723,520 square kilometers in 1988 and 3,307,949 square kilometers in 2018, according to rainforest data on Mongabay. Media outlets and celebrities herald Amazon fires as devastating and unstoppable — and reporting from The NYT shows this is not a new trend.

Simons described the fires raging throughout the Amazon and said for many settlers and farmers, “fire is the only tool for transforming forest into farm or pasture.”

“Like eerie ghosts of the trees and animals dying below, thick clouds of smoke are rising over the rain forest as the man-made fires of the annual dry season are once again upon the Amazon,” Simons wrote.

She described “tons of flames and particles” hurling into the sky, adding that at night, “roaring and red, the forest looks to be at war.” (RELATED: Brazilian President Jair Bolsonaro Suggests His Enemies Are Starting Amazonian Fires Out Of Revenge)

Pollution from the burning forests traveled thousands of miles, Simons wrote, suggesting links between the fire emissions and damage to Earth’s ozone shield. She also cited researchers who said the lack of forest cover caused by the burning forest allows for huge volumes of greenhouse gas.

Environmentalists warn the destruction is increasing every year, she wrote. 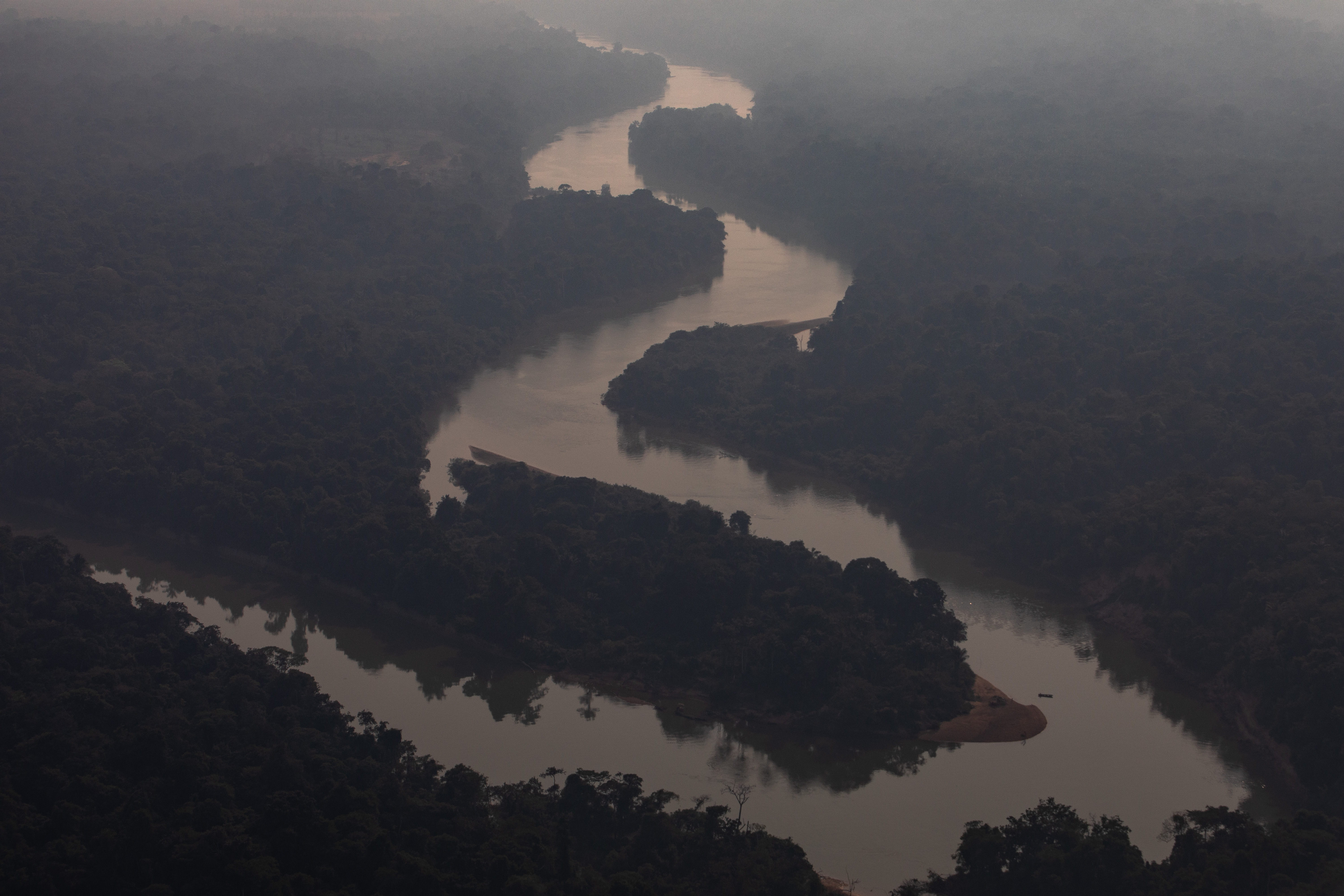 In this aerial image, smoke covers a section of the Amazon rainforest affected by wildfires on Aug. 25, 2019 in the Candeias do Jamari region near Porto Velho, Brazil. (Photo by Victor Moriyama/Getty Images)

“There is no proof yet that the material is interacting with the ozone shield, which is much higher in the stratosphere,” Simons quoted a satellite data coordinator at the Space Research Center in Brazil, Alberto Setzer, saying.

“But we know the material gets to the Antarctic region, and we know that storms can pump it upward,” Setzer said. “We do not know yet how high it reaches. Several people are working on this.”

Forestry experts say spontaneous rainforest fires are rare, Simons added, describing how workers will cut trees, allow them to dry and then set them on fire during the dry season. The fires usually remain within intended boundaries since the cut trees are the only ones dry enough to burn.

The National Forestry Service in Brasilia promised to levy heavy fines for burning in 1988, Simons reported.

Brazilian President Jair Bolsonaro said on Aug. 21 that non-governmental organizations might be purposefully burning the Amazon rainforest to embarrass his government because he cut their funding.

His words came as Brazil experienced over 72,000 fire outbreaks — more than half of which were in the Amazon. Farmers reportedly organize “fire days” to clear land, and some activists argue the president’s words attempt to distract from his own lack of oversight. Activists also argue that increased deforestation and burning stem from the president’s anti-environmental policy.

Celebrities and other media figures have taken up the Amazon’s case in August, calling the rainforest the “lungs of the Earth” and sharing photos of flaming forests.

“The lungs of the Earth are in flames,” actor Leonardo DiCaprio said in a reposted Rainforest Alliance message on Instagram. Soccer star Cristiano Ronaldo tweeted, “The Amazon Rainforest produces more than 20% of the world’s oxygen.”

“The Amazon rain forest — the lungs which produce 20% of our planet’s oxygen — is on fire,” tweeted French President Emmanuel Macron.

Many of these photos turned out to be from many years ago or taken in Montana, India and Sweden, according to Forbes. CNN and The NYT warned these photos were inaccurate while still emphasizing that the Amazon is the “lungs” of the world.

“Deforestation is neither new nor limited to one nation,” CNN reported.

“These fires were not caused by climate change,” The NYT added on Aug. 23.

But scientist Dan Nepstad, the founder of Earth Innovation Institute, says it is simply not true the Amazon is the “lungs” of the world.

“It’s bullshit,” he said, according to Forbes. “There’s no science behind that. The Amazon produces a lot of oxygen, but it uses the same amount of oxygen through respiration so it’s a wash.”