Steven Menashi’s nomination for the 2nd U.S. Circuit Court of Appeals is the latest touchstone in the judicial confirmation wars.

Liberal commentators and activist groups are accusing Menashi of advancing extremist positions in the Trump administration and as an academic, while his conservative supporters say Democrats are warping his views. The 2nd Circuit is the federal appeals court that covers Connecticut, New York, and Vermont.

“These are the same types of smears the Democrats have thrown at several highly qualified people nominated by the president to serve as federal judges including Amy Coney Barrett, Neomi Rao, Brian Buescher, Ken Lee and, of course, with Supreme Court Justice Brett Kavanaugh — all of whom were confirmed,” said Judicial Crisis Network (JCN) chief counsel Carrie Severino.

In another column during the same period, Menashi said “Take Back the Night” marches, which promote awareness about sexual misconduct, are wrong to implicate men generally in rape or other forms of assault.

The Alliance for Justice (AFJ), a liberal advocacy group, connected that rhetoric to Menashi’s recent work as a top lawyer at the Department of Education (DOE), where he helped craft new rules for adjudicating campus sexual assault allegations. Those guidelines guarantee a presumption of innocence for the accused, and require that both parties have full access to the evidence. DOE’s reforms were invariably applauded for strengthening due process or derided as patriarchal.

“Steven Menashi’s litany of racist, sexist, and homophobic remarks should be absolutely disqualifying for anyone seeking a lifetime seat on the federal bench,” said AFJ president Nan Aron. “At the Department of Education, he served as Betsy DeVos’s right-hand man as she rolled back Title IX protections and undermined equal access to quality education. There is nothing in his record that gives any indication that Menashi could be trusted to administer even-handed justice.”

“The left will look for material wherever they can find it to twist and misrepresent: law review articles, college newspaper columns — even high school yearbooks,” Severino wrote.

Yet college-era writings have dogged several Trump judicial nominees. Lawyer Ryan Bounds’s nomination for the 9th U.S. Circuit Court of Appeals faltered on the Senate floor when GOP Sens. Tim Scott of South Carolina and Marco Rubio of Florida joined Democrats at the last minute to oppose his nomination. The pair raised concerns over opinion pieces Bounds wrote as a Stanford undergraduate criticizing diversity policies and student activist groups, as well as Bounds’s failure to share those pieces with a judicial selection panel. (RELATED: One Of Kavanaugh’s High School Classmates Is Suing HuffPost For ‘Fabricated’ Reporting) 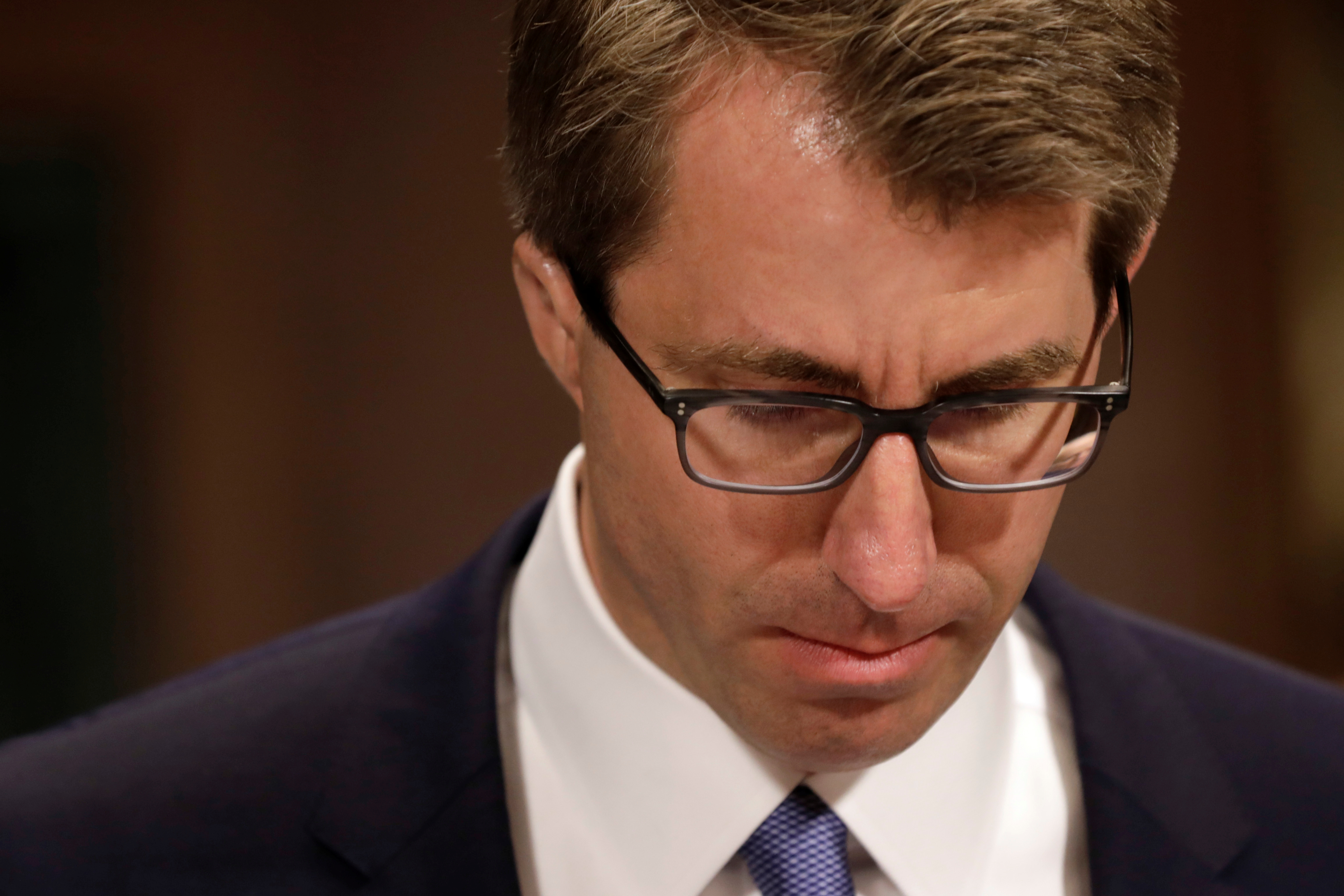 Ryan Bounds pauses as he testifies before a Senate Judiciary Committee on May 9, 2018. (Reuters/Yuri Gripas.)

Judge Neomi Rao, who succeeded Justice Brett Kavanaugh on the U.S. Court of Appeals for the D.C. Circuit in March, faced similar scrutiny over an opinion column she wrote at Yale University that admonished women to avoid unwanted sexual interactions by staying sober. Rao apologized for the remark in a February letter to the Senate Judiciary Committee and was ultimately confirmed.

Some of Menashi’s more recent work has attracted similarly harsh criticism. MSNBC host Rachel Maddow panned a law review article he wrote in 2010 as a teaching fellow at Georgetown University Law Center, calling it “a high-brow argument for racial purity.”

The piece, called “Ethnonationalism and Liberal Democracy,” defends Israel against the common charge that its particular identity as a Jewish state contradicts principles of liberal democracy. Menashi argued that many advanced democracies use ordinary policy means to promote a common sense of identity. Such fellow-feeling, Menashi believes, helps maintain democratic culture that has become a norm of the international order.

Menashi was a law professor at George Mason University and a partner in the New York offices of Kirkland & Ellis before he joined the Trump administration. He served in the Education Department, then joined the White House counsel’s office in September 2018. He is a graduate of Stanford Law School who clerked on the Supreme Court for Justice Samuel Alito.