Swarms of lefties are pouncing on the New York Times for publishing a story that does not brand the Tea Party as “racist.” As of late, The Gray Lady has been facing down enormous criticisms.

Three weeks ago, lefties trounced the paper when a headline about President Trump‘s reaction to recent mass shootings wasn’t up to snuff. Just yesterday, Bret Stephens, one of the paper’s conservative columnists, was universally mocked for taking himself too seriously. He fled Twitter after being called a “bedbug.” (RELATED: NYT Columnist Lets The Bedbugs Bite)

“A fundamental flaw in this analysis is there is no mention of race and how much racism drove the Tea Party movement,” tweeted Matthew Dowd, chief political analyst for ABC News. “You can’t talk about the rage politics and leave out race.”

Wesley Lowery, who covers race for The Washington Post and got himself arrested when he wouldn’t immediately leave a McDonald’s in Ferguson, Missouri, during the 2014 summer riots, blasted Peters’ article.

“How do you write a 10 years later piece on the Tea Party and not mention – not once, not even in passing – the fact that it was essentially a hysterical grassroots tantrum about the fact that a black guy was president?” he tweeted. “Journalistic malpractice.”

But there is a glitch. Lowery soon found a sentence he hadn’t read the first time around. If the sentence was really there from the onset, then his bad, he says. Forget all that “malpractice” talk. 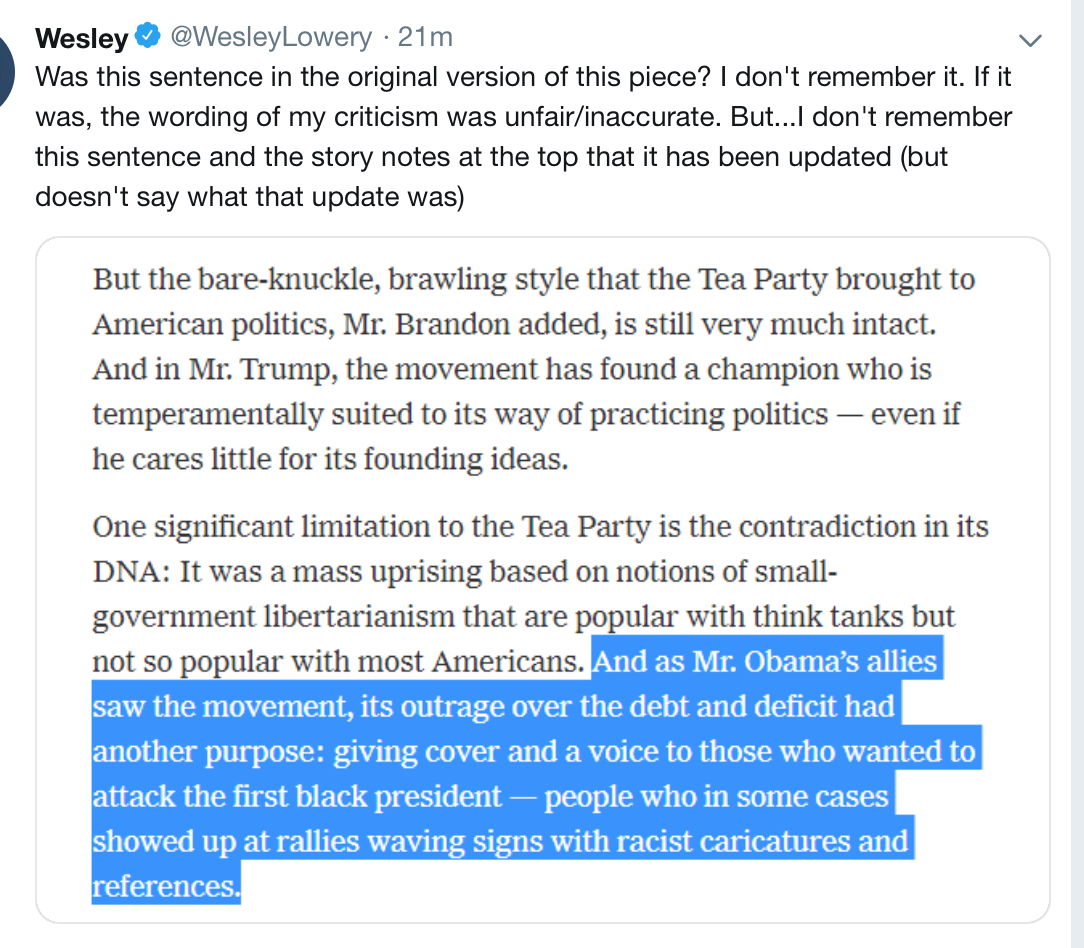 Whether he was wrong or not, Lowery did an about face on his walk back.

“Worth noting that this sentence (whether there originally or not), deploys classic media cop out — turning racism into a partisan issue,” he wrote. “*Democrats say* send her back was racist. *Nancy Pelosi* says the attack on Baltimore was racist. *Obama allies* say the Tea Party was racist.”

Got it. Lowery is sticking to his “journalistic malpractice” charge against Peters.

CNBC’s John Harwood, who writes a weekly column for the NYT, shared the sentiment: “A 10-years-after piece that describes the Tea Party this way: ‘It was a mass uprising based on notions of small-government libertarianism,'” he wrote in reaction to a New York Times piece on a look back at the formation of the Tea Party by Jeremy Peters, who is also a contributor at the liberal MSNBC. (RELATED: John Harwood Questions Trump’s State Of Mind)

Peters, who is writing a book on President Trump‘s takeover of the GOP, wrote in his piece, “One significant limitation to the Tea Party is the contradiction in its DNA: It was a mass uprising based on notions of small-government libertarianism that are popular with think tanks but not so popular with most Americans.”

The Mirror sought comment from Peters on the backlash to his story.

In the summer of 2018, Peters told Slate that he didn’t see himself as a reporter on a pro-Trump supporter beat.

Adam Parkhomenko, a Democratic strategist and adviser to Hillary Clinton, got pretty damn personal and cracked, “We’re all shocked that Steve Bannon’s pet Jeremy Peters still doesn’t see any role that Obama’s race played in the rise of the tea party. More stellar work from the NYT.”

WaPo food writer Jamie Schler, a consistent Trump hater, agreed with Dowd, saying, “Exactly. The racism, equality… movements like this almost uniquely have to do with what they perceive as social upheaval, social changes happening at a speed they don’t understand, feel they can’t keep up with, feel that their world is unrecognizable.”

Some journalists on the other side of the aisle pricked ABC’s Dowd, a self-proclaimed Independent, for his beliefs.

“Any update on you giving up your ‘place at the table’ because it looks like you’re having some trouble with practicing what you preach?” asked Emerald Robinson, chief White House correspondent for One America News Network.

Jay Caruso, deputy editor for the Washington Examiner Magazine, also had a question: “How on earth did this guy become ABC’s top political analyst?”

Pete Wasserman, a Phish head and financial product strategist, reasoned, “The @nytimes publishing this piece without mentioning the racism is a little too on brand for them.”

On social media, readers called the story “weak” and wondered if Peters had any basic understanding of the Tea Party.

“I too love fiction,” wrote @pukebot.

Someone named @innerpeace added, “You forgot to mention all the racism, Jeremy.”