With the U.S. presidential election entering full swing, Moscow is taking another look at former vice president and Democratic frontrunner Joe Biden. Although very few Russian elites have fond memories of the Obama years, Donald Trump’s first term in office is pushing some to wonder whether a President Biden would be so bad.

Over the couple months, several prominent Russian parliamentarians have offered cautious praise for Biden. In particular, the former vice president’s pledge to rejoin the Iran nuclear deal and extend the New START treaty earned a positive reaction in Moscow.

Senator Konstantin Kosachev, Chairman of the Russian Federation Council’s Foreign Affairs Committee, welcomed Biden’s promise and added that since the two agreements were concluded under the Obama administration, it was fair to assume that Biden’s commitment to keeping them alive was “quite sincere, and not just an election move.” (RELATED: Biden Faces Renewed Scrutiny Over Son’s Relationship To Ukrainian Gas Company)

This sentiment was echoed by Senator Alexei Pushkov, another influential foreign policy lawmaker, who tweeted, “Biden sharply opposed Russia at a conference in Munich, he is the heir to the Obama line. But these two steps are very important for strategic stability and preventing a war with Iran.” 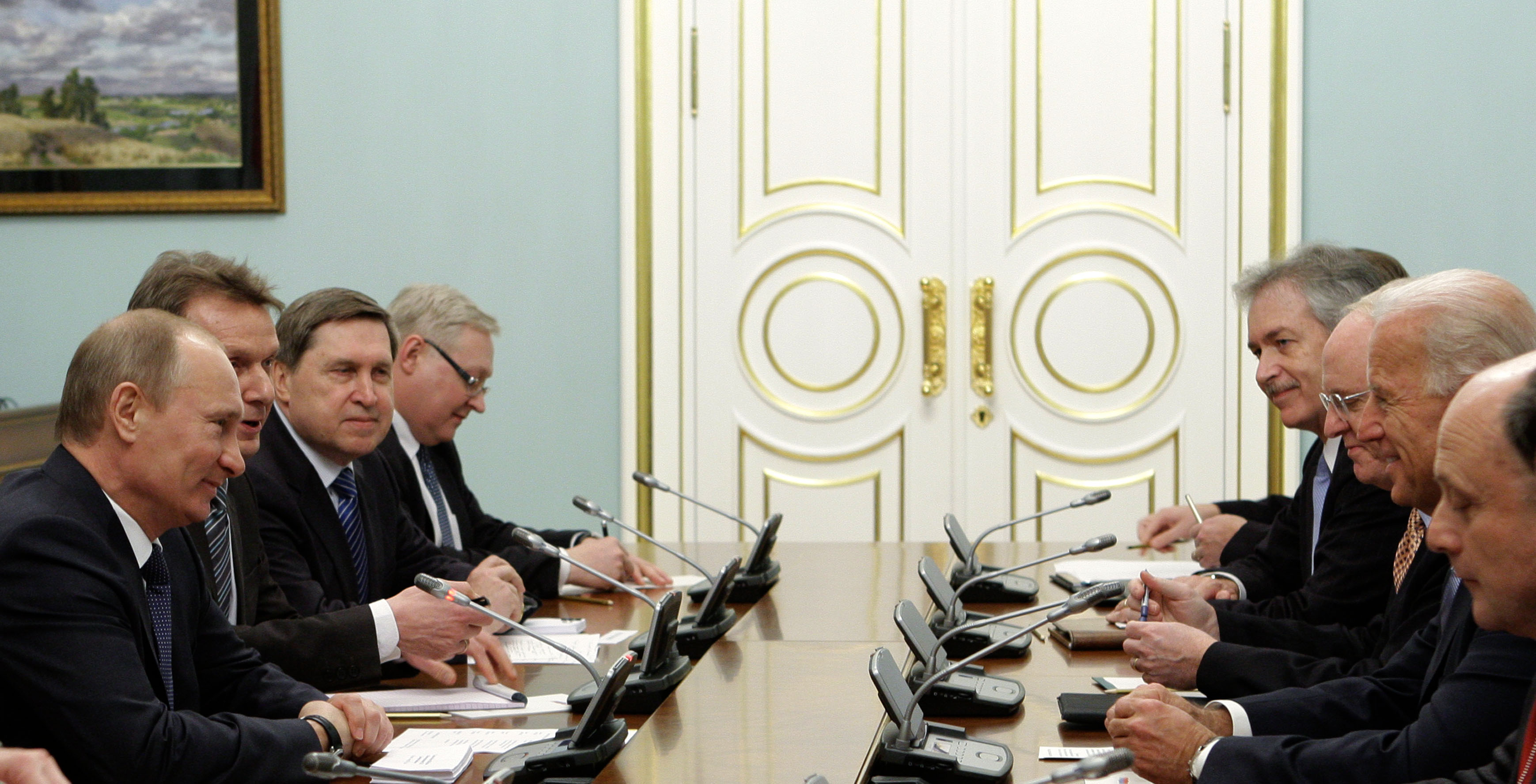 Russian Prime Minister Vladimir Putin (L) and US Vice President Joe Biden (2nd R) meet on March 10, 2011 with their delegations in Moscow. Putin on March 10 proposed to Biden that Russia and the United States abolish visas in a “historic” step to seal a revival in ties. Biden’s visit is aimed at building on the “reset” in relations spearheaded by Russian President Dmitry Medvedev but Putin has until now enjoyed less cordial relations with Washington than his successor as Kremlin chief. AFP PHOTO / RIA-NOVOSTI POOL / ALEXEY DRUZHININ (Photo credit should read ALEXEY DRUZHININ/AFP/Getty Images)

Valery Garbuzov, Director of the Institute of the USA and Canada at the Russian Academy of Sciences is not surprised by these remarks. According to him, there is growing disillusionment with Donald Trump in Moscow. Garbuzov told The Daily Caller that the Kremlin “has sobered up” on the American president and no longer believes he can or will significantly improve U.S.-Russian relations.

“Trump says a lot of nice words at summits with Putin, but as soon as he returns to Washington, he signs with ease legislation and his own executive orders instituting new sanctions against Russia,” he said. “Russia’s leadership has finally realized that under the current circumstances, it cannot no longer place its bet on Trump.”

Garbuzov explained that the tense state of U.S.-Russian relations under Trump has encouraged members of the Russian political elite “to take a look at Trump’s possible successor, Joe Biden, and try to find some opportunities in his positions for a constructive beginning.”

Moscow has reason to feel disappointed with Trump. Although Trump expressed interest in détente with Russia as a candidate, as president his administration has maintained a tough stance towards Moscow. In some respects, he has gone even further than Obama. The Trump administration launched strikes against Russia’s client-state Syria and approved lethal arms sales to Ukraine, two moves that his predecessor balked at as being too provocative.

Furthermore, some in Moscow are increasingly tired of Trump’s unpredictable style and cannot help but yearn for a more conventional leader in the Washington. (RELATED: Biden Says Russian Interference Wouldn’t Have Happened On His Watch. It Did)

Andrei Sushentsov, Program Director at the Valdai Club and Director of the Institute of International Studies at MGIMO University, argued that Trump takes an unnerving approach to foreign policy. Sushentsov pointed to Trump’s decision to exit the Iran deal and his shift from maximum pressure on North Korea to diplomacy with Kim Jong Un as cases that left many in the Russian foreign policy establishment confused.

“These episodes showcased the temperament of the occupant of the White House rather than some long-term strategy,” he said. “This of course aggravates and concerns Moscow, and forces it to view with a certain skepticism and distrust the initiatives put forth by this White House.”

Sushentsov told The Daily Caller that Russia’s leadership would welcome a return to normalcy in Washington, even if it comes in the face of Joe Biden.

“If such practices were relegated to the past, no one in Moscow would regret it. If Joe Biden is one who bring this change, then no one will object,” he said.

However, the Kremlin is not likely to fully embrace Biden anytime soon. Although Russian political elites have found some upside to Biden, they still regard the Democratic front-runner with enormous suspicion. 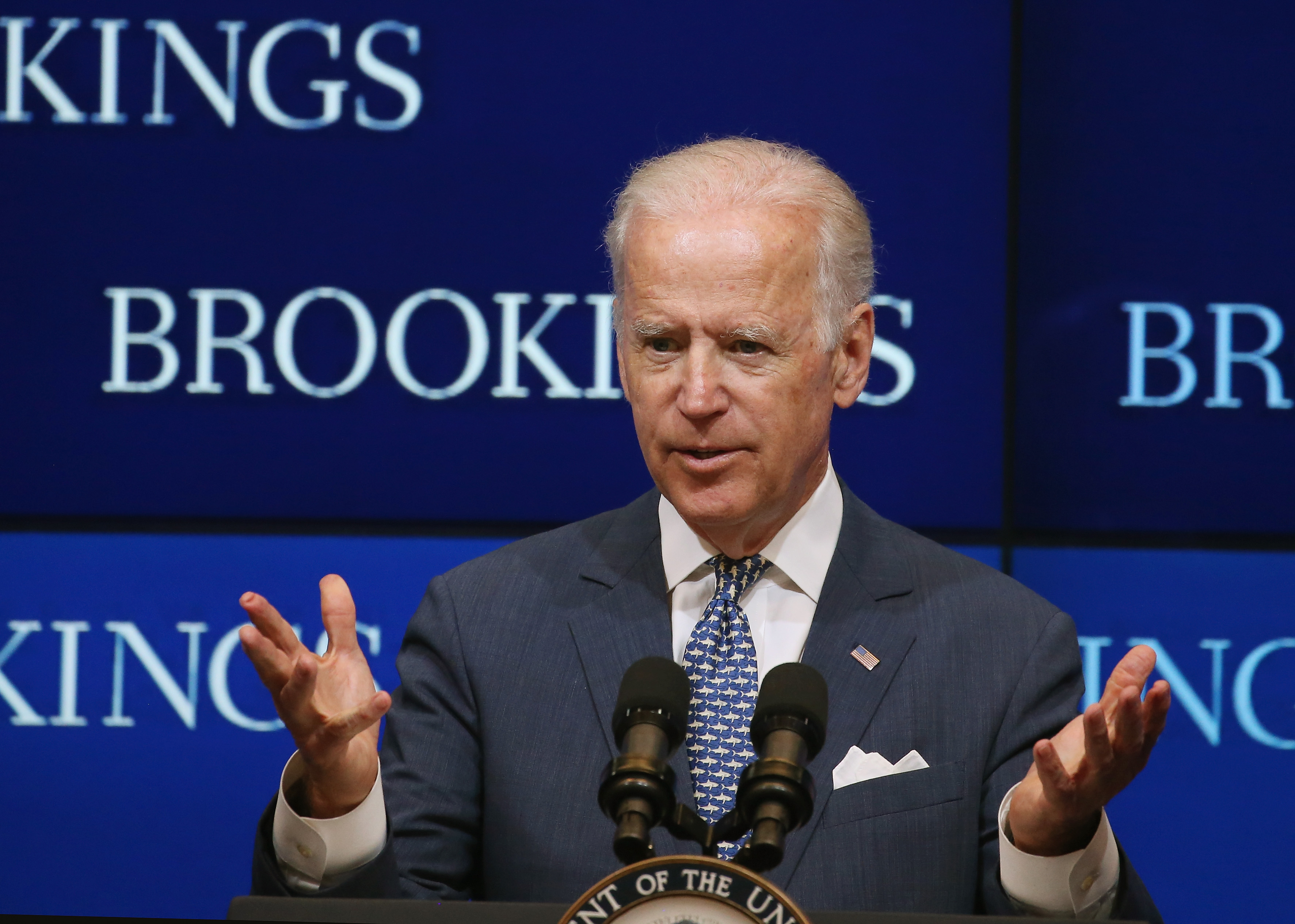 WASHINGTON, DC – MAY 27: U.S. Vice President Joseph Biden speaks at the Brookings Institute May 27, 2015 in Washington, DC. Vice President Biden spoke about the Russia-Ukraine conflict and its implications for European security. (Photo by Mark Wilson/Getty Images)

Dmitry Suslov, Deputy Director of the Center for Comprehensive European and International Studies at the Higher School of Economics, explained that many in the Russian foreign policy establishment view Biden as a ‘mini-Clinton’ – a typical Washington hawk eager for regime change in Moscow.

“Biden is without question unpopular among the Russian establishment and if he becomes president U.S.-Russian relations will undoubtedly get worse,” he said. “America’s policy of containing Russia will continue, but will acquire a more ideological tone.”

Suslov emphasized that the final year of a potential Biden first term would coincide with Putin potentially stepping down from the presidency and handing the reigns of the country to a successor.

“In this context, the Russian establishment of course does not want to have an American president who views Russia as an ideological adversary,” he said.

Moscow also fears that a President Biden will adopt a more confrontational stance on Ukraine. As Vice President, Biden handled the Obama administration’s Ukraine portfolio and has frequently expressed sympathy for Kiev’s aspiration to break from Russia’s orbit. Senator Kosachev, who praised Biden for his position on arms control, has also accused him of fueling “permanent civil war, militaristic intoxication, and blind Russophobia” in Ukraine.

Following the 2016 election, the Russian political elites hoped that Trump would herald in a new era of U.S.-Russian relations. Times have changed. Much of that earlier optimism has been replaced by a belief that high tensions between Moscow and Washington are here to stay. Regardless of who emerges victorious in 2020, that feeling is unlikely to go away anytime soon.

As Sushentsov told The Daily Caller, the best Russia can do under the current circumstances is to try to make the best of a bad situation. “Moscow has made peace with the fact that regardless of who is in the White House, the United States will remain a difficult, unpredictable, and uncomfortable partner,” he said.