“Bret Stephens would last less than five minutes in media and run away screaming in horror if he had to see my daily Twitter responses.”

— Meghan McCain, co-host, ABC’s “The View,” over the long weekend.

THEY’RE BACK! Kicking off season 23 with a co-host group photo! ✨@WhoopiGoldberg@JoyVBehar@sunny@HuntsmanAbby@MeghanMcCain pic.twitter.com/odQDzt7XOR

MOOD: “I’m greatly enjoying the Mattis media tour of anchors trying to get him to say the most milquetoast tiny negative thing about trump only for him to give a condescending sigh and say nah maybe later.” — Asawin Suebsaeng, reporter, The Daily Beast.

FNC’s Janice Dean, senior meteorologist: “When I thanked General Mattis for his service, he replied: ‘Well, you’re worth it.’ It was an honor and a privilege to meet such a great man, a hero and the definition of a true patriot.”

“You would think the opposition party would have a field day with a president cancelling a trip to commemorate WWII so he could monitor a hurricane only to then be spotted playing golf two days in a row at his personal club. But I can’t even recall seeing one Dem take a whack.” — Sam Stein, The Daily Beast.

Playboy contributor Amee Vanderpool cracked, “Everyone is tired and there’s really no point.

“The LameStream Media has gone totally CRAZY! They write whatever they want, seldom have sources (even though they say they do), never do ‘fact checking’ anymore, and are only looking for the ‘kill.’ They take good news and make it bad. They are now beyond Fake, they are Corrupt… …The good news is that we are winning. Our real opponent is not the Democrats, or the dwindling number of Republicans that lost their way and got left behind, our primary opponent is the Fake News Media. In the history of our Country, they have never been so bad!” — President Trump.

Andrew Abramson, formerly of the Palm Beach Post and The Sun Sentinel remarked, “Dude STFU and enjoy the holiday. Go do something useful. Unite some Americans. If you can’t do that, go back to sleep.”

“Everyone once in a while I think about the seven-figure TV news anchors whose job is to literally read on camera for an hour a night, and their producers who do ALL the work and make 36,000 a year.” — Gene Park, WaPo.

HURRICANE HAIR: CNN’s Berman in the ocean in Miami 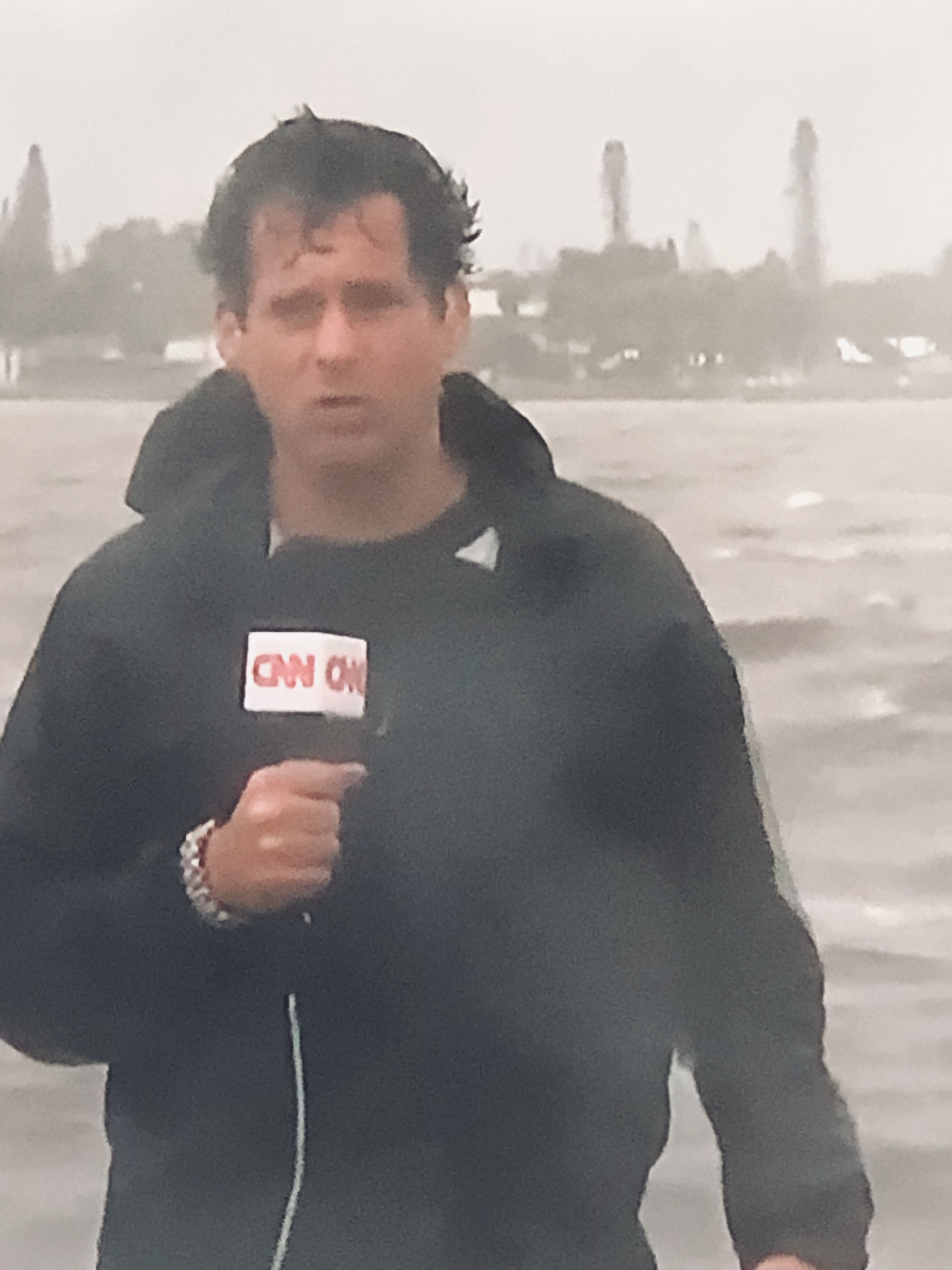 Everyone wants Sasha Obama in her sorority… Here.

The latest on Tiffany Trump… Here. In her 2019 comedy special “Not Normal,” Wanda Sykes, who performed at the White House Correspondents’ Dinner in 2009, went off on Tiffany Trump:

Washington Examiner reporter writes about the life advantages she got by rooming with about 1,000 cockroaches. Here.

Marianne Williamson swears she isn’t cuckoo… “She isn’t some barefoot flake conducting a drum circle or playing the harp. (‘Why do people make crystal jokes?’ she asked me at one point. ‘I don’t use crystals!’) No, she wears Armani. She’s a practical person. A meat-eater. … “When David Brooks says it, it’s profound,” she told me. ‘When I say it, it’s woo-woo.'” — a New York Times Mag piece by Taffy Broddeser-Akner. Read the whole thing.

“It was easy to get carried away. I clapped along with the voters of Iowa, all of them sitting and willing to listen to anyone who might have a good idea. A political reporter sitting next to me said, ‘Taffy,’ and put her hands over mine to stop my applause. But when she looked at me to scold me, she saw that I was crying. ‘Dear God,’ she said.” — In the story by Taffy Broddeser-Akner.

“This is a Critical Column About Bret Stephens” Here. By David Drezner, an international politics prof at Tufts.

Prince Harry sticks up for his need to sometimes jet by private plane. Here. (Nigel Farage Weirdly Claims Prince Harry Has Had A Drop In Popularity)