President Donald Trump recently caused an international outcry when he suggested readmitting Russia into the G7 club of industrial economies. Few opposed this proposal more than Germany – which quickly issued a statement denouncing the idea as unjustly rewarding Moscow for its behavior in Ukraine.

Curiously enough, German Chancellor Angela Merkel held a phone call with Russian President Vladimir Putin less than a week after the G7 uproar. The two leaders ended their conversation with a pledge to speed up negotiations for major new gas pipelines.

The G-7 showdown between Washington and Berlin is no isolated incident. Over the course of Trump’s first term in office, Germany has played two starkly contrasting roles on Russia. On the one hand, German politicians vigorously push back against Trump’s efforts to reset relations with Russia. At the same time, German companies rush to invest billions into the Russian economy and sign lucrative energy deals with Moscow — even when doing some comes at the expense of Russia’s neighbors and undermines the financial pressure the West placed on Russia after its 2014 annexation of Crimea. (RELATED: Trump Notches A Big Win Against Russia After Merkel Folds On US Gas Imports)

Following Trump’s victory in 2016, Berlin was one of the first capitals to lambast the president-elect’s interest in outreach to Russia. German Defense Minister Ursula von der Leyen accused Trump of looking to abandon core Western principles in favor of cozying up with Putin.

“Donald Trump has to clearly say which side he is. Whether he’s on the side of law, peace, and democracy and or whether doesn’t care about all that and instead he’s just looking for a best buddy,” she said. 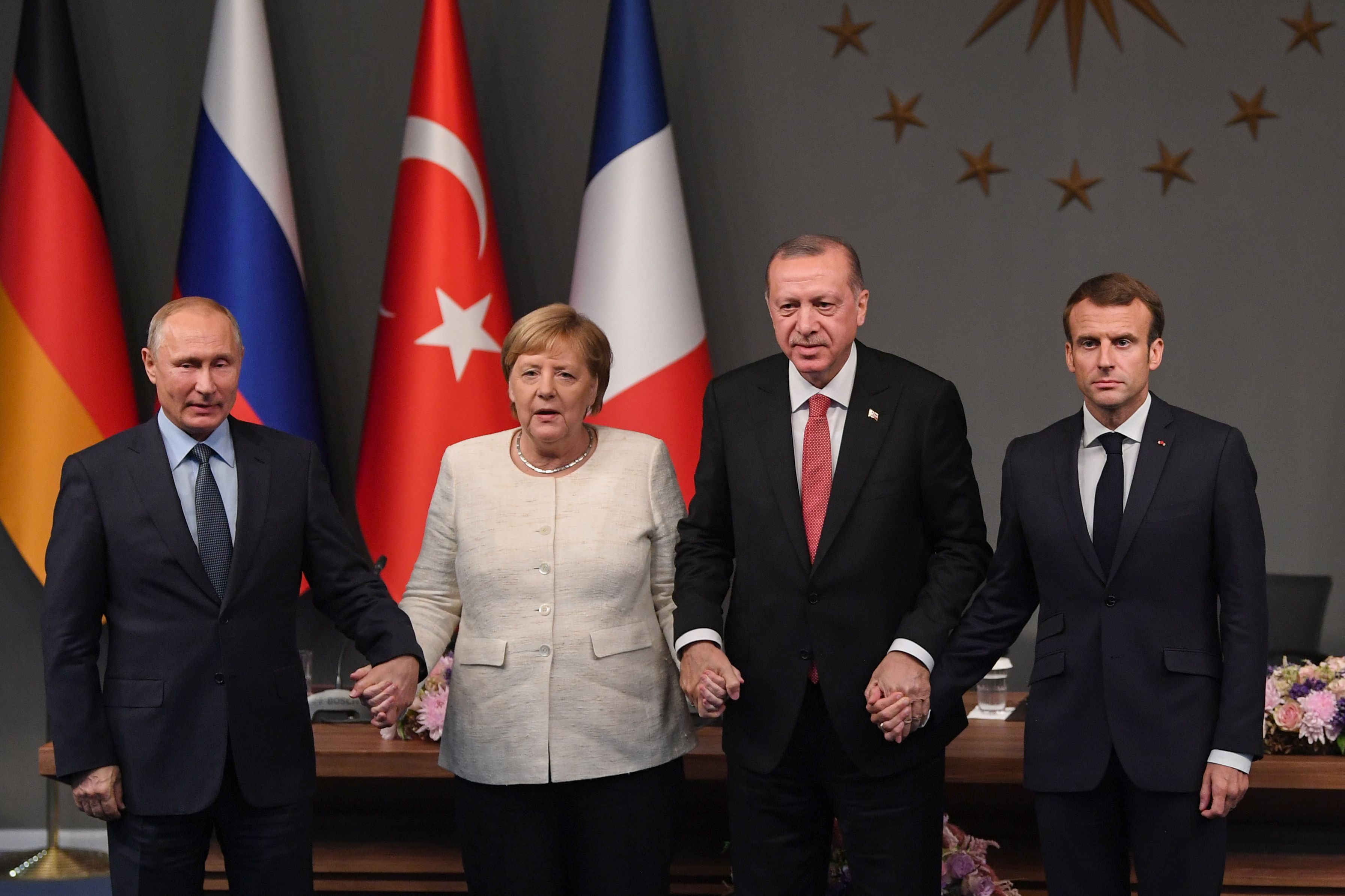 TOPSHOT – (From L) Russian President Vladimir Putin, German Chancellor Angela Merkel, Turkish President Recep Tayyip Erdogan and French President Emmanuel Macron, hold hands after a onference during a summit called to attempt to find a lasting political solution to the civil war in Syria which has claimed in excess of 350 000 lives, at Vahdettin Mansion in Istanbul, on October 27, 2018. – The leaders of Turkey, Russia, France and Germany are set to meet in Istanbul to try to find a lasting political solution to the Syrian civil war and salvage a fragile ceasefire in a rebel-held northern province. (Photo by OZAN KOSE / AFP) (Photo credit should read OZAN KOSE/AFP/Getty Images)

Norbert Rottgen, head of the German parliament’s foreign affairs committee and a member of Merkel’s Christian Democratic Union, echoed Leyen’s sentiments. He told Financial Times that Trump displayed an “accommodating” attitude towards Putin to and warned that Trump’s “attitude is a definitely a threat to the capacity of the West to stand up to an aggressive and nationalist Russia.”

German leaders occasionally got creative in their efforts to dissuade Trump from pursuing improved relations with Russia. When Merkel met Trump for the first time in March 2017, she reportedly spent much of the meeting lecturing the American president about Putin’s imperial ambitions, using a map of the old Soviet Union as a prop.

Berlin has long pushed for NATO to increase the pressure on Moscow, but with Trump in office that call became even louder. At last year’s NATO summit, Merkel emphasized that the alliance’s top priority should remain containing Russia in Eastern Europe – a position contrary to Trump’s view that NATO should shift its focus towards combating terrorism, regulating the migrant crisis, and resisting China’s growing influence in Europe.

When it comes to funding NATO, however, Germany is not so eager to assume a leadership role. In 2014, Germany along with all other NATO members pledged to raise military spending to 2 percent of GDP by 2024 so that the alliance could better respond to an emboldened Russia. But Berlin is expected to fall well below that mark. The German government’s 2020 budget projects that Germany will spend just 1.25 percent of GDP on defense expenditures in 2024. (RELATED: Trump RIPS Merkel Over Hypocrisy On Russia)

Syria is another issue in which Germany is pushing the United States to adopt a tough stance towards Russia. Speaking at the Munich Security Council in February, Merkel expressed concern over the Trump administration’s plans to withdraw American troops from Syria, warning that such move could empower Moscow.

“Is it a good idea for the Americans to suddenly and quickly withdraw from Syria?” Merkel said.  “Or will it once more strengthen the capacity of Iran and Russia to exert influence?”

Germany notably does not have any ground troops in Syria. When the United States earlier this summer requested that Berlin send some, the German government promptly declined.

Despite Berlin’s public alarm about the Russian threat, German businesses are doing more than almost anyone else to cultivate ties with Moscow. According to the Russia-German Chamber of Commerce, German companies invested over €3.3 billion ($3.7 billion) into the Russian economy in 2018. This mark represents the highest investment level in over a decade and even outstrips the amount of German investment in Russia before the Kremlin’s 2014 annexation of Crimea.

Additionally, there are 4,500 German companies registered in Russia – 10 times greater than from any other European Union member state. 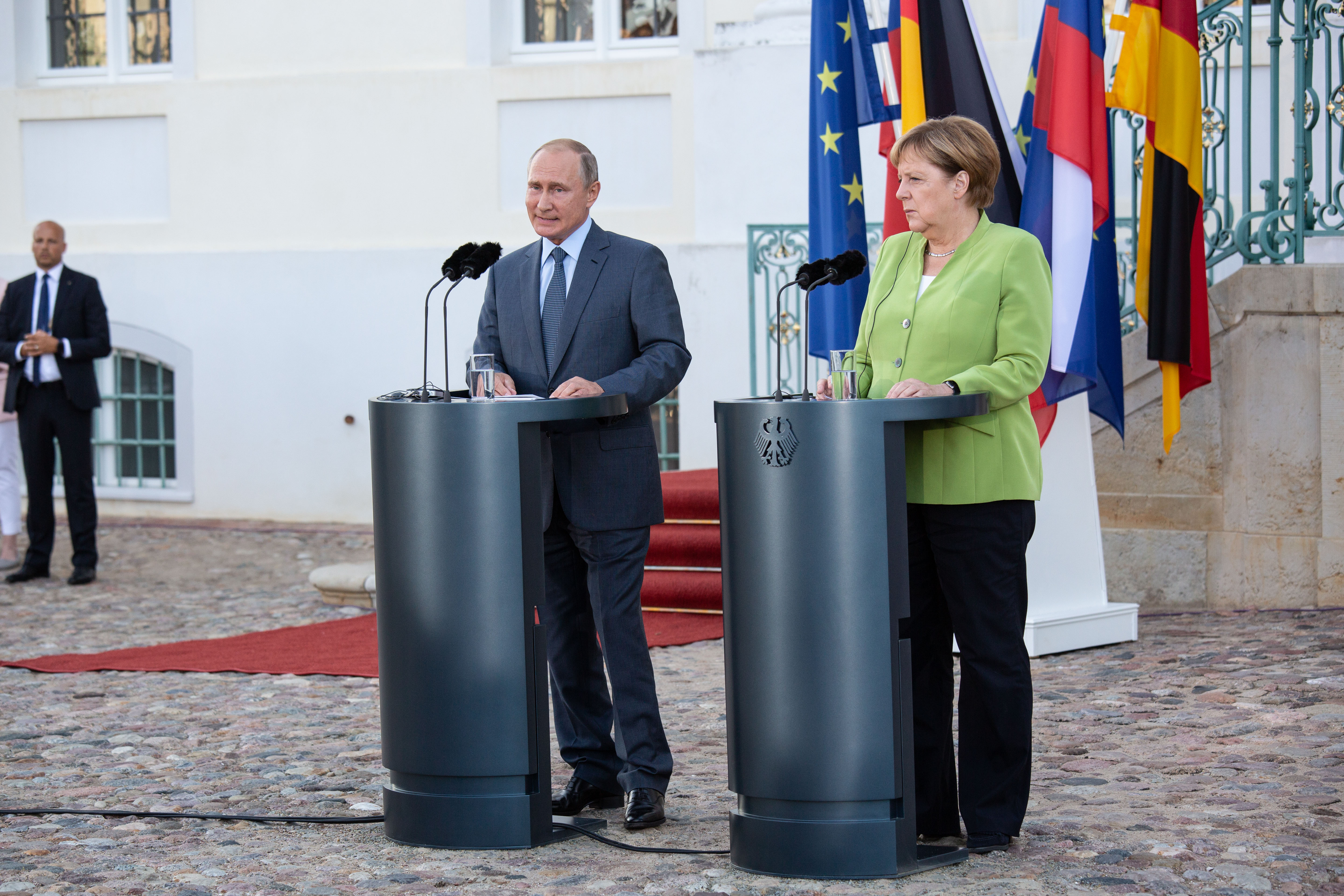 GRANSEE, GERMANY – AUGUST 18: German Chancellor Angela Merkel and Russian President Vladimir Putin deliver a joint press statement prior to their meeting at Schloss Meseberg palace, the German government retreat, at Meseberg on August 18, 2018 in Gransee, Germany. The two leaders are meeting to discuss a variety of issues, including the current international sanctions imposed on Russia, the situation in Syria as well as the situation in eastern Ukraine. (Photo by Omer Messinger/Getty Images)

German economic interests in Russia are poised to only keep growing. German investment in Russia was valued at €1.76 billion ($1.98 billion) during the first quarter of this year, a 33 percent increase from the year before. Furthermore, in June the biggest German firms in Russia announced that they would invest €395 million ($444 million) into the country’s economy this year.

At a time when Russia struggles to attract foreign direct investment, Germany provides it with much needed economic relief.

The largest joint Russian-German economic project is undoubtedly the Nord Stream 2 — a 1,200-kilometer (746-mile) underwater pipeline running through the Baltic Sea that will deliver Russian natural gas directly to Germany. Once completed, $11 billion pipeline will enable Germany to double its consumption of Russian gas. Such a development would not be minor. As of 2017, Russian gas made up 40 percent of German total gas consumption.

Beyond increasing Germany’s reliance on Russian gas, Nord Stream 2 has significant geopolitical ramifications for Moscow’s neighbors. Ukraine has the most to lose from the pipeline. For decades, Ukraine has received a significant portion of its state income from serving as a transit for Russian gas to Europe. With the Nord Stream 2 pipeline, Moscow will be able to bypass Kiev to deliver its gas to Europe, making Ukraine poorer and more politically vulnerable.

Germany’s incongruity on Russia has not gone unnoticed. During last summer’s NATO Summit, Trump complained to the alliance’s Secretary-General Jens Stoltenberg, “We’re supposed to be guarding against Russia and Germany goes out and pays billions and billions of dollars a year to Russia.”

Although widely derided by the press for these remarks, Trump had point. Berlin is eager to confront the Russian bear, so long as someone else is paying the price.