“My main concern was I don’t know if you should be this close to home because I don’t want you using home like it’s your home.”

— ABC’s Kelly Ripa on daughter Lola attending New York University, the same city where the TV host lives with her husband Mark Consuelos. Ripa made the remarks Tuesday during On Air With Ryan Seacrest. Read the full story.

MOOD: “Reminder of what Pence chief of staff Marc Short told reporters yesterday: Q: Did Pres Trump ask VP Pence to stay at the property? SHORT: ‘I don’t think it was a request, like a command. I think that it was a suggestion…It’s like, ‘Well, you should stay at my place.'” — Karen Travers, White House correspondent, ABC News.

“HAPPENING NOW: @realDonaldTrump is speaking at an event to unveil $1.8bn in grants to combat opioid addiction. He appears to be having trouble speaking, as if he has a dry mouth.” — Andrew Feinberg, White House reporter, Breakfast Media.

“Since you obviously want to debunk, counter or mischaracterize anything I do, would you like to have an honest and fair public dialogue? Since I’m neither crazy, irresponsible nor dangerous, I would appreciate the opportunity to counter the caricature.” — Marianne Williamson, author, Democratic presidential hopeful. 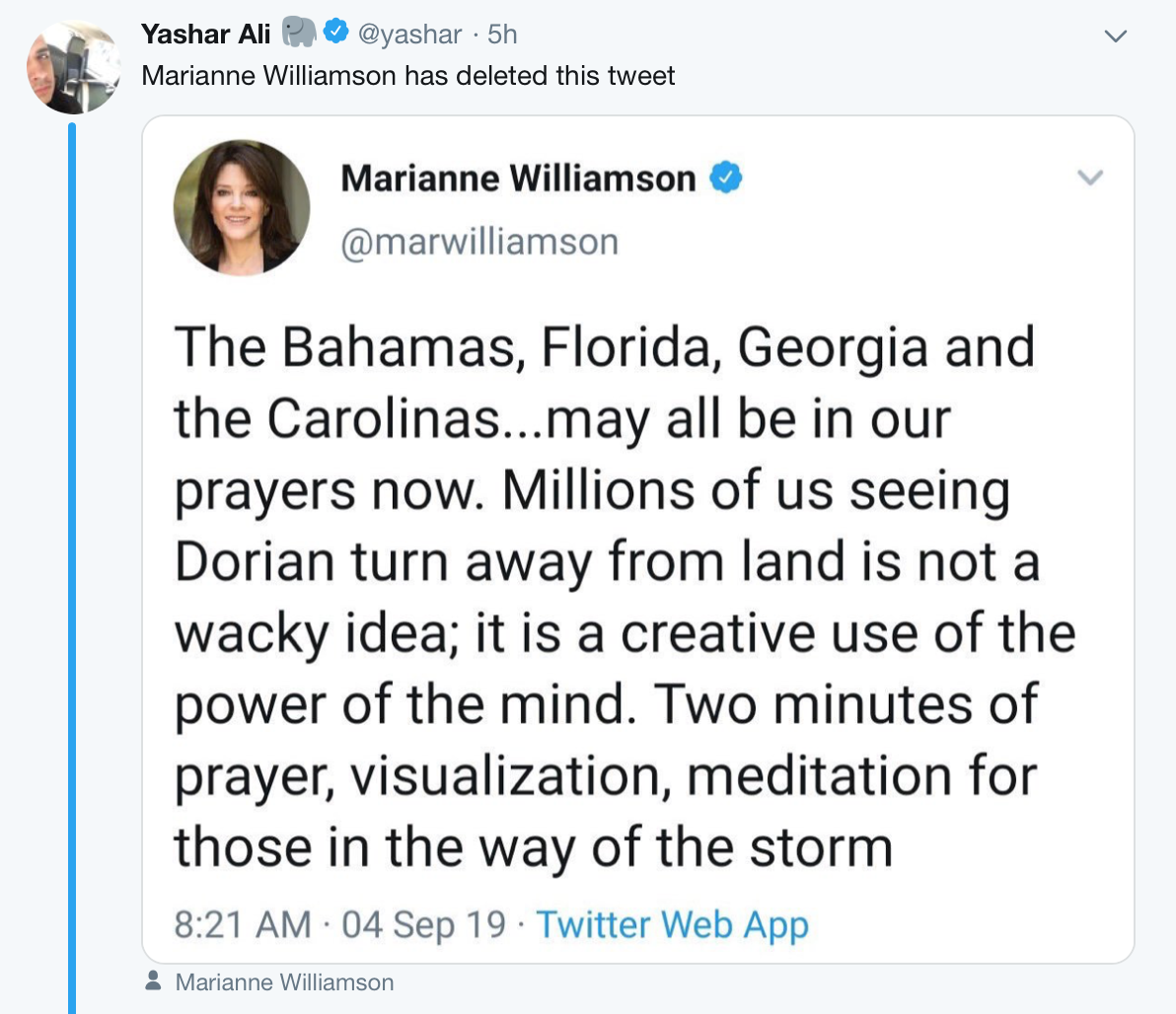 How he responded to her…

“Not sure why this tweet provoked your frustration @marwilliamson. I simply noted that you deleted a tweet. I did not editorialize. With respect to your offer to have an ‘public dialogue,’ thank you but I am reserving my time to speak to candidates who qualified for the debate.” — Yashar Ali, reporter, HuffPost, New York Mag.”
OUCH!
Adam Parkhomenko, a Democratic strategist and adviser to Hillary Clinton, cracked, “Damn. She’s going to need an extra big healing crystal for that one.”
BuzzFeed reporter downplays Williamson story
“I mean sure it’s kinda kooky but politicians ask people all the time to pray for the fires to stop or the rains to end. How is this different?” — David Mack, deputy director, BuzzFeed News, which would never make a big deal out of something like this — right?! In late July, BuzzFeed published “Is This A Marianne Williamson Quote Or Did I Just Make This Up?” It’s a quiz highlighting some of Williamson’s strangest quotes, just in case Mack would like to review the story on his own website.

Headline of the Day: “Charges Official Dropped Against Ex-U.S. Rep. Aaron Schock [R-Ill.] In Unusual Deal With Feds” Here. Long and short of it… yes, he can run for office.

Unnecessary Question of the Day: “Has anybody tried those toothpaste tablets that are all over Instagram and are they completely disgusting?” — Erin Biba, science journalist, National Geographic, BBC, Scientific American.

“If you’re new to my timeline please note that the next several months will contain many comments on the waxy sadness that is candy corn, the worst candy ever.” — Kimberly Ross, contributor, Washington Examiner.

“Fav part of bedbug-gate is still by far Bret Stephens probably just lied about a friend or someone sending him that random tweet virtually nobody saw at first; he wasn’t even willing to say he found it himself because of his…. pride? Maybe he wanted to pretend he had friends?” — Asawin Suebsaeng, reporter, The Daily Beast. (RELATED: Bret Stephens Lets The Bedbugs Bite)

“Is the Chappelle special actually good or is it something we’re all pretending to like because the Wrong people have dumb criticisms of it?” — Joe Gabriel Simonson, Washington Examiner, formerly The Daily Caller.

Come November, Bina Venkataraman will assume the top spot of the publication’s Editorial Board and will bear the title of Editorial Page Editor.

From a release: “The Boston Globe Editorial Board is one of the strongest and most vibrant editorial boards in the country,” said Boston Globe’s Managing Director, Linda Henry. “We tackle big issues in bold ways as well as subtle and everyday challenges. We thoughtfully look for ways to advocate, to progress, and to help others use their voices to inform and inspire others. We are thrilled and fortunate to add Bina’s perspective and leadership to our board.”

“I once got photographed by Bill Cunningham because I was wearing some wild-ass earrings I got at Pat Field’s store (RIP) outside a fashion show and that’s all I need for the rest of my life.” — Amanda Mull, staff writer, The Atlantic.

Geraldo Rivera shoots himself in the foot over AR-15. Here.

Eliana Johnson, Politico, will be the new EIC of Washington Free Beacon. She formerly worked for National Review Mag.

Brian Karem, White House reporter, Playboy: “I grew up with you in office in Louisville. The first politician I ever covered outside of my family. You are reprehensible. You are there for no one but yourself. You remain the worst of any politician I’ve ever covered in my life. You smear yourself. @senatemajldr.”

(Karem was reacting to a story about Sen. Maj. Leader Mitch McConnell (R-Ky.) pushing back on nickname “Moscow Mitch.”)