Republican National Committee (RNC) Chairwoman Ronna McDaniel warned about the dangers of cancel culture Wednesday and responded to the stars of “Will & Grace” shaming supporters of President Donald Trump.

McDaniel said the left’s tactics to name and shame Trump supporters and conservatives are “extreme” during an on-the-record lunch with Winning for Women for female reporters in Washington, DC.

Hollywood actors Debra Messing and Eric McCormack prompted some backlash recently after asking news outlets to publish Trump donors so that the stars can boycott them. The stars later claimed that they weren’t calling for a “blacklist.” (RELATED: ‘Will & Grace’ Star Asks News Outlets To Out Trump Donors For Boycotts) 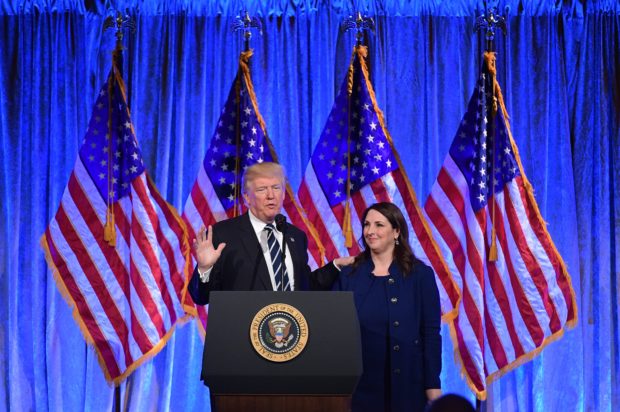 US President Donald Trump speaks after his introduction by RNC Chairwoman Ronna Romney McDaniel at a fundraising breakfast in a restaurant in New York, New York on December 2, 2017. (MANDEL NGAN/AFP/Getty Images)

“The View” co-host Whoopi Goldberg called out the idea of publicly naming donors.

McDaniel also suggested that the left’s insistence on bullying Trump supporters into silence could lead to higher fundraising numbers for the RNC and the campaign.

“And guess what? We’re going to post record numbers in August and I’m going to thank Hollywood for helping us raise more money. Thanks for boycotting our donors because we’re going to raise so much more,” she said bitingly. “Have your issues fought out at the ballot box but don’t shame people because they disagree with your beliefs.”