“Violence and the threat of violence for political ends isn’t right, and the fact that 36 ANTIFA protestors were arrested—including nine for assault and battery on a police officer and five for carrying or assault with a dangerous weapon—is yet another indication that ANTIFA is an active domestic terrorist organization,” Sen. Cruz told The Daily Caller in an exclusive statement Thursday.

“Mob violence promoting ideology (left-wing or right-wing) is dangerous, and the Department of Justice should open an organized crime investigation into ANTIFA to vigorously combat this threat nationwide.”

Cruz’s comment comes after Ocasio-Cortez used her social media following to promote a fundraiser for a group of counter-protesters who planned and committed violence in response to a “Straight Pride” parade in Boston Saturday.

“One way to support the local LGBTQ community impacted by Boston’s white supremacist parade? Contribute to the Bail Fund for the activists who put themselves on the line protecting the Boston community,” the New York Democrat said in a social media post Saturday.

Contribute to the Bail Fund for the activists who put themselves on the line protecting the Boston community:https://t.co/z2NRSqHMve

As The Caller has previously reported, the rally organizers had African-American speakers and denied connections to racism.

The counter-protesters that Ocasio-Cortez was raising bail money allegedly assaulted police officers, and many identified with the Antifa movement.

One man, a member of Antifa, told the Boston Herald, “We’re covered in black so when we attack these guys we can’t be prosecuted.”

There were 36 arrests during the rally on various charges including assaulting police officers and assault using a dangerous weapon.

Boston PD has released log of arrested individuals from Saturday’s antifa counter-protest against the Straight Pride. They face an array of charges including battery of officers & assault using a dangerous weapon. Congresswomen AOC & A. Pressley expressed support for protesters. pic.twitter.com/OXAiIk2aWK

The Caller repeatedly reached out to Rep. Ocasio-Cortez’s office for a comment on her raising bail money for group of protesters that allegedly assaulted police officers and openly admitted to planning violence, but her office has remained silent. 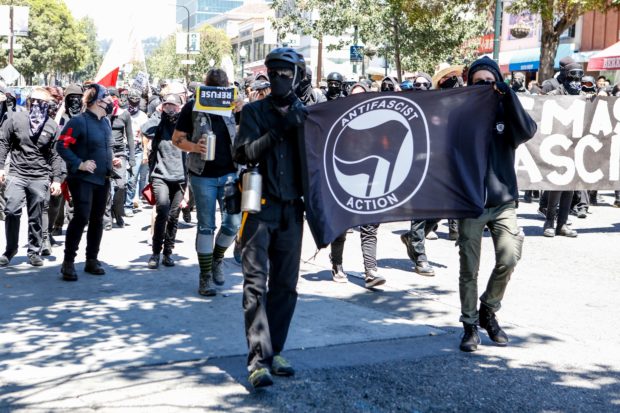 Sen. Cruz has been a strong critic of the Antifa movement. In July, Cruz and Republican Louisiana Sen. Bill Cassidy introduced a resolution to condemn the violent far-leftists as a domestic terrorist organization.