One of America’s largest sporting goods retailers is taking shots at Walmart’s new ammo policy with an add campaign and limited edition t-shirt.

Brownells is a retailer that offers a variety of firearms, gun parts and accessories primarily through its online store. Recently, the company added a new t-shirt to its inventory. The politically charged garment aims to critique Walmart for its recent decision to stop selling ammunition for the types of firearms frequently targeted by gun control.

Brownell’s new t-shirt is now available to preorder at $14.99, and features what appears to be seven .357 magnum rounds arranged to resemble Walmart’s logo set before a Walmart-blue background. The shirt also showcases Brownell’s name and implores viewers to “save freedom. Buy ammo.” 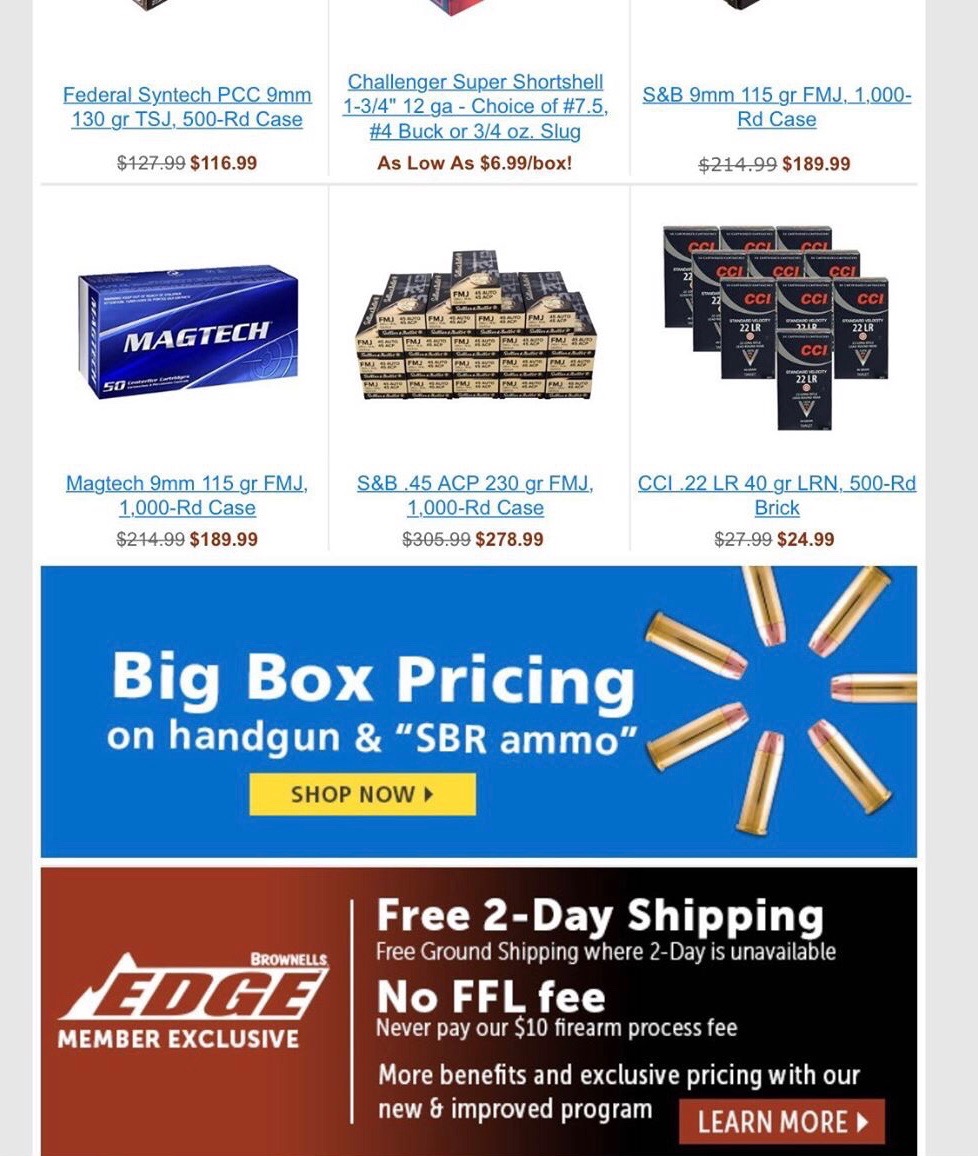 A Brownells sent this marketing email which included discount deals on ammunition as well as a shot at Walmart. (Brownells/Promotional Email)

Many gun enthusiasts were confused when Walmart vowed to stop selling ammunition for handguns and SBRs. This is because while handguns are generally chambered in handgun-specific calibers, however any caliber of rifle can be converted to an SBR after a lengthy and expensive ATF approval and registration process. (RELATED: Tucker And Patel: Walmart’s ‘Woke Capitalism’)

A Walmart spokesperson has also said the company will stop selling ammo that “can also be used in large-capacity magazines,” according to the Washington Free Beacon. As the Beacon points out, this makes no sense because any round can be placed into a so-called “high capacity magazine.”

Walmart’s new policy nixes the sale of .223/5.56 ammunition. Rifles chambered in .223/5.56 are cheap to feed and easy to shoot, making them immensely common and popular. Before its recent decision, Walmart sold roughly 20% of the ammunition in America. With the removal of handgun rounds, .223/5.56 rounds and other calibers from its lineup, the company’s share of the ammo market could drop as low as 6%, according to the Washington Post.

1
'Another Slap In The Face': Media Melts Down After Trump Picks Grenell As Acting DNI
Media
2
Woman Jumps On Car During Argument. It Might Be The Craziest Thing You See All Day
Editorial
3
'Before I Even Run, I Already Lost': Track Star Behind Transgender Lawsuit Speaks Out
US
4
Mike Bloomberg Said Elderly Cancer Patients Should Be Denied Treatment
Politics
5
Top Pentagon Official Who Played Role In Ukraine Scandal Steps Down
Politics