Rat Trap Inc. recently began working with NYC to employ the use of its “Ekomille rat eradication system,” which works by baiting rats onto a trap door before dropping them into a vat of an alcohol based solution, causing them to drown. This rat trap has already seen success “all over Europe” according to the company website, and was cleared for use in the Big Apple after successful trials in Brooklyn, CNN reports.

The Daily Caller reached out to PETA for its take on New York’s newest pest control measure.

PETA ‘s Senior Media Liaison Catie Cryar told The Caller that she doubts the new traps will be effective. Instead, she says they’ll only start “vicious killing cycle that accomplishes nothing.” According Cryar, “the city will always find itself two steps back if it depends on killing” rather than rat-prevention.

“Rats have the capacity to feel pain, fear, loneliness, and joy, just as humans do—and they deserve our protection. There are always other solutions—the city should be looking into effective nonlethal methods instead of endlessly killing rats who are simply trying to eke out an existence,” she concluded.

In August, the animal rights group took a similar stand against all rodent extermination, instead suggesting in a press release that rats be provided with “ingestible birth control.” The release also showcased a billboard PETA hoisted in Baltimore that accuses wealthy humans, not rats, of being pests. 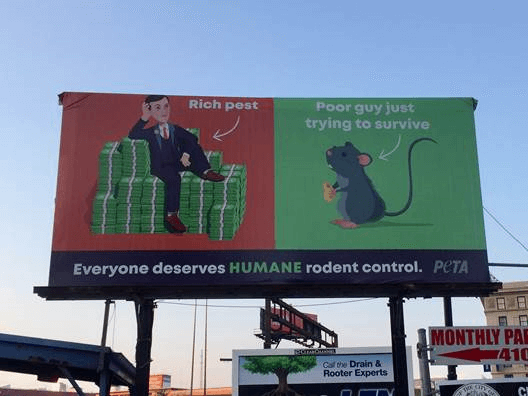 PETA put this billboard up over Baltimore to support rodent rights. (PETA/Press Release)

The release explicitly stated that the billboard was raised in response to Trump’s comments about Baltimore’s rat infestation and is designed to make “the point that there’s a difference between a ‘rich pest’ and a poor fella just trying to survive on crumbs.”

PETA isn’t the only party concerned with rodent wellbeing. (RELATED: Report: Bill de Blasio Logged Seven Hours In May While Running For President)

New York City officials invited members of the media to a demonstration Thursday of the new traps, showing off an Ekomille device filled with dead rats.

The press conference “was a ghastly spectacle and the odor was stomach-churning” wrote the Times’ Kimiko de Freytas-Tamura.

A reporter from the Gothamist was equally unimpressed.

Rat Trap Inc. assures New Yorkers that their traps are “safe, hygienic and ecological” with an informational video promoted on the home page of their website.

“One fact about rat poison: it takes days for a poisoned rat to die,” the video explains. “In that time, it continues to breed, it slows down and it becomes easy pray.”

Poisoned rats becoming pray for larger animals has been responsible for countless instances of pet poisoning, according to the company. In some cases, the rats have also introduced poison to New Yorkers’ homes, harming small children.

Each trap can be secured in place via a lock and is billed as discrete and tamper-proof.

This is not the first time NYC has unveiled a new rat control strategy. In 2017, Mayor Bill de Blasio presented a pricy $32 million extermination project which has apparently proved insufficient. The current project costs $3 million, according to Rat Trap Inc.