Antifa labeled a black man, who has worked to de-radicalize KKK members, a white supremacist at a Pennsylvania event last month.

Daryl Davis was a speaker at an “Ending Racism” event organized by MINDS, which was part of a series “intended to create dialogue and promote viewpoint diversity.” Davis, a musician, is a race relations expert who has spent years speaking to and rehabilitating members of groups like the KKK.

About 40 Antifa members showed up to protest “Ending Racism,” which was moved from a New Jersey theater to a center in Pennsylvania because Antifa threatened to burn down the theater, Davis told the Daily Caller News Foundation. Some Antifa members called Davis, who is black, a white supremacist for attending the event.

“I laughed, I thought it was funny,” Davis told the DCNF. “What it proves is they had no point. They had no evidence of anything. When it boils down to just name calling people and you don’t show any proof and you refuse to talk to them … they refused to even come in. There were no Klansman or Neo-Nazi’s in there or alt-right people.”

Antifa was invited to come inside and attend the after-party but refused, Davis said.

Many Antifa members are aware of Davis and the work he has done, he said. Davis knew organizers at the 2017 “Unite the Right” rally in Charlottesville, Virginia, and has worked to help individuals involved in any extremist group to lessen violence and racism in America.

“They [Antifa] want to shut down any dialogue with racists, people who have differing views of their own,” Davis said. “Their thing is, you know, just beat it out of them or make it impossible for them to meet.” 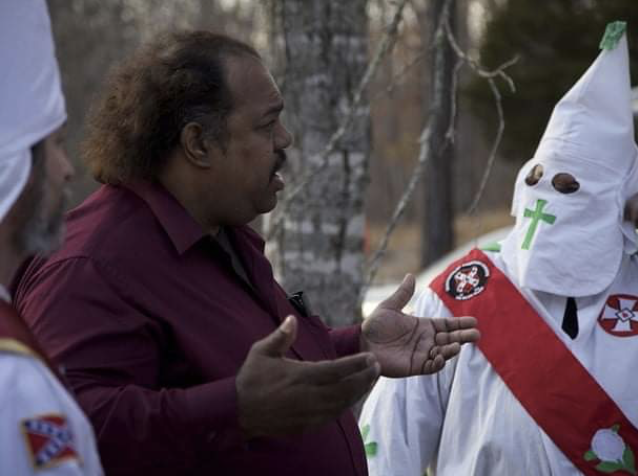 Daryl Davis, who has worked to de-radicalize members of extremist groups, talks to people in the KKK. (Screenshot Facebook Daryl Davis)

Antifa is a “radical” group heading in the same direction as the KKK, Davis added. He mentioned the KKK’s typical attire of covering their faces with hoods and masks to cover their identity, noting that “Antifa is now the one wearing the bandanas across their face or the masks.”

Davis has been called “just about every name” from “race traitor” to “Oreo” to “a pimp and a prostitute,” he wrote on Facebook. He noted it was the first time he was called white supremacist, adding it “threw me for a loop.”

“If it boils down to my being called a white supremacist, obviously they’ve lost the case,” Davis said. “If you’re that strong and set in your view, just sit down and have a conversation. Beating it out of them is not gonna work.”

Editor’s Note: An earlier version of this story inaccurately stated that Davis attended the Unite the Right rally.