Rep. Adam Schiff, the chairman of the House Intelligence Committee, demanded that Michael Flynn appear before the committee for testimony Sept. 25, after the former national security adviser failed to provide documents and said he would plead the Fifth.

The committee subpoenaed Flynn on June 12 for personal and business records as part of an ongoing investigation of the Trump administration. In a five-page letter to Flynn’s lawyers, Schiff said Flynn “failed to comply with the Committee’s subpoena or cooperate with the Committee’s efforts to secure [his] compliance.”

Schiff is seeking Flynn’s correspondence with Trump associates, as well as business records from Flynn Intel Group (FIG), the consulting firm that has landed Flynn in legal trouble because of work done on behalf of the Turkish government.

Flynn’s former business partner, Bijan Rafiekian, was convicted July 23 for working as an unregistered foreign agent of Turkey stemming from his work at FIG in 2016. 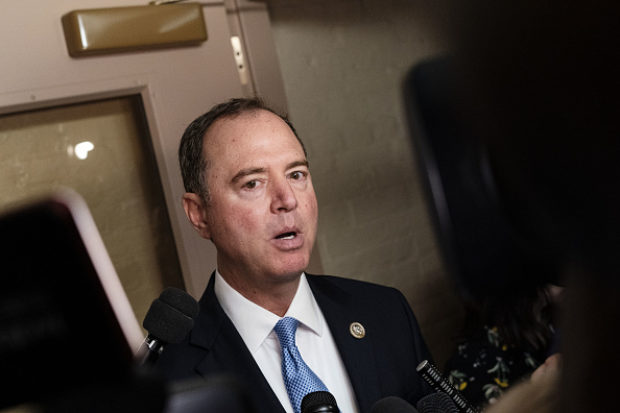 Adam Schiff speaks to members of the media before a Democratic caucus meeting at the U.S. Capitol in Washington, D.C., U.S., on Wednesday, May 22, 2019. (Alex Edelman/Bloomberg via Getty Images)

Flynn’s defenders have noted two disgraced FBI officials were an integral part of the investigation into Flynn.

Former FBI Deputy Director Andrew McCabe set up the White House interview with Flynn. Peter Strzok, who led the FBI’s investigation into the Trump campaign, led the interview. McCabe would later be fired from the FBI for lying to investigators about authorizing a leak of information unrelated to the Russia probe. Strzok was fired Aug. 13, 2018, over anti-Trump text messages he sent while directing the Russia investigation.

Flynn was initially set to be sentenced in that case Dec. 18, 2018, but has sought several delays in sentencing as he continued cooperating with prosecutors.

According to Schiff’s letter, Flynn’s new lawyers told the committee Aug. 22 that Flynn had already produced “large caches” of documents to congressional committees, and that he did not have the financial resources to comply with the request. They suggested the committee contact the Justice Department to obtain the documents.

They also reiterated that Flynn planned to invoke the Fifth Amendment in any testimony he gives the committee.