The Trump administration is replacing old, ineffective barriers at the U.S. southern border, but they cannot say when they will begin constructing wall in areas with no existing border barrier.

Acting Customs and Border Protection (CBP) commissioner Mark Morgan provided updates on wall construction during a press briefing Monday, explaining that the administration has erected 65 miles of border wall to replace vehicular barriers or otherwise small, dilapidated structures that are not effective deterrents for pedestrian border crossers. Comparatively, the new wall largely consists of 30-foot tall structures that are embedded in concrete.

“If you go to those areas where there was pedestrian barriers or their old landing mat, where they can just knock it over the car, or cut a hole in it in seconds — where new wall was going in, that’s exactly what it is,” Morgan argued. “And if you go out there and ask the agents, they’ll tell you that’s new wall.”

With the help of the $3.6 billion in wall funding pulled from the Pentagon and other executive actions taken by President Donald Trump, the administration expects to be able to complete 450-500 miles of this “new border wall” by the end of 2020. (RELATED: Here’s How Trump Thinks He Can Get His Wall)

Morgan did acknowledge a difference between what he calls “new wall” and “new linear miles.” The new linear miles would encompass border wall being built in sectors where no barriers — no matter how small — previously existed. He noted that by 2020 the Rio Grande Valley sector could “easily reach 100 new miles of linear wall.”

Morgan declined to answer, however, when the Daily Caller asked when Americans can expect the administration to actually break ground on construction projects on new linear miles of wall. 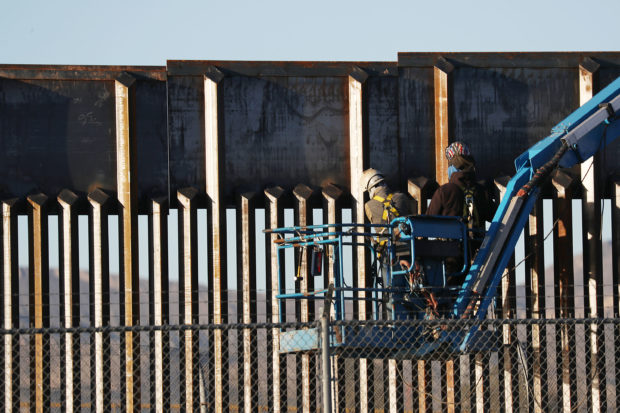 EL PASO, TEXAS – FEBRUARY 12: People work on the U.S./ Mexican border wall on February 12, 2019 in El Paso, Texas. U.S. President Donald Trump visited the border city yesterday as he continues to campaign for more wall to be built along the border. Democrats in Congress are asking for other additional border security measures. (Photo by Joe Raedle/Getty Images)

A senior administration official told the Caller that the administration’s focus on “new wall” rather than “new linear miles” is due to the priorities of border agents and logistical roadblocks.

“These places were actually priority, not just building in areas to say we are making progress,” the official said.

Another official added, “Every new mile that’s been built is because CBP have asked for it there.”

Building new linear miles is also more difficult because, in most cases, the administration has to purchase or otherwise acquire the land for construction.

Senior administration officials also argued that the Trump administration is actually ahead of schedule when compared to past border wall construction projects. During the early 2000s when the Bush administration was building many of the border barriers that exist today, Americans could expect to see a two-year timeline between allocating funding for barriers and actually finishing construction. Now, that process takes closer to nine to eleven months.