A Washington Post story changed its framing on a story about census data collected under the Trump administration at least four times, first touting the record-low poverty rate under President Donald Trump at the top of the article and later burying it and focusing on the rise of uninsured Americans.

The poverty rate fell to the lowest since 2001 while the uninsured rate rose in 2018, the census data released Tuesday reads, according to WaPo. The outlet first titled its article “U.S. poverty rate fell to lowest since 2001 while uninsured rate rose in 2018, Census says.” This title showing off the Trump administration’s success was changed shortly after.

About an hour later, WaPo changed its headline to highlight the negatives in the census. The second headline read that the “Uninsured rate rose in 2018 despite strong economy, Census says.” The headline was later changed for a third time, and then slightly altered a fourth time. (RELATED: WaPo Issues 15 Corrections On A Story About Black People Struggling To Retain Their Land In The South)

WaPo’s story angle changed drastically from the first copy, published the morning of September 10. The first sentence talked about “more Americans” benefiting “from the prolonged economic upswing” in the original article. The story also included information about the low poverty rate.

It touted the Trump administration’s success high up in the article, noting “the official U.S. poverty rate fell to 11.8 percent in 2018, the lowest since 11.7 percent in 2001 and a sign that the devastation from the Great Recession had faded.” 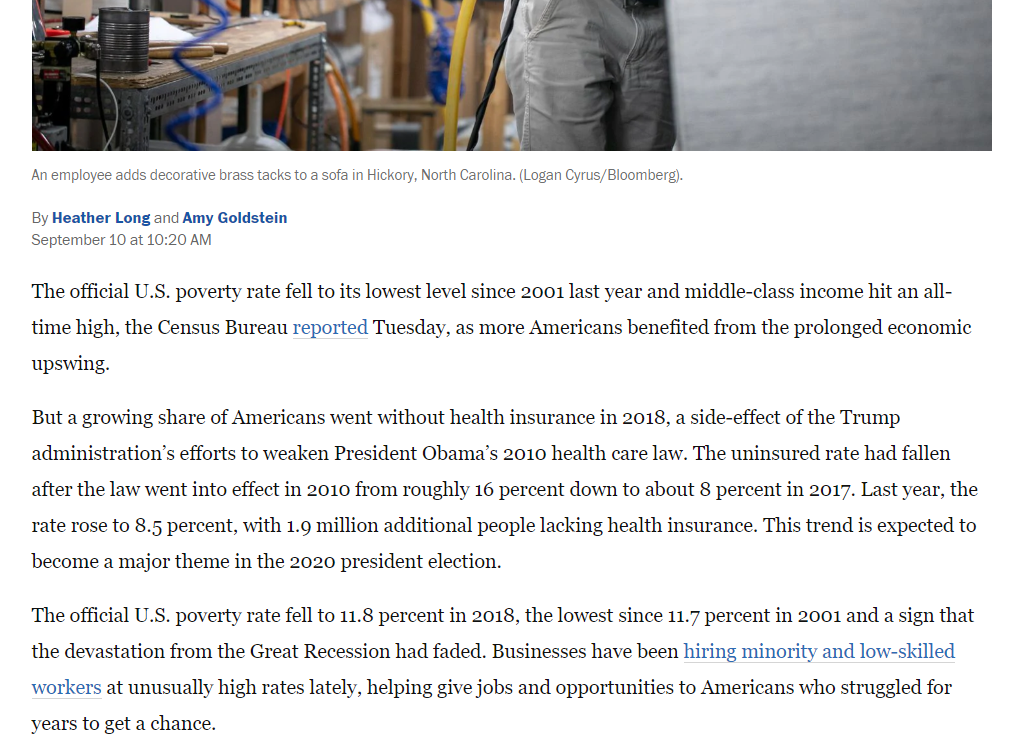 The article was then changed to read that “Nearly two million additional people lacked health insurance last year compared with 2017.” It didn’t mention Trump’s record-low poverty rate until five paragraphs into the story. The article included additional comments, including one about President Barack Obama, noting that after he passed the Affordable Care Act the uninsured rate “fell steadily.”

“The economic and political consequences of this new trend could intensify leading up to the 2020 elections, with Republicans alleging that the law is flawed and Democrats alleging the Trump administration has dismantled it in a way that leaves many Americans vulnerable,” the updated article read. 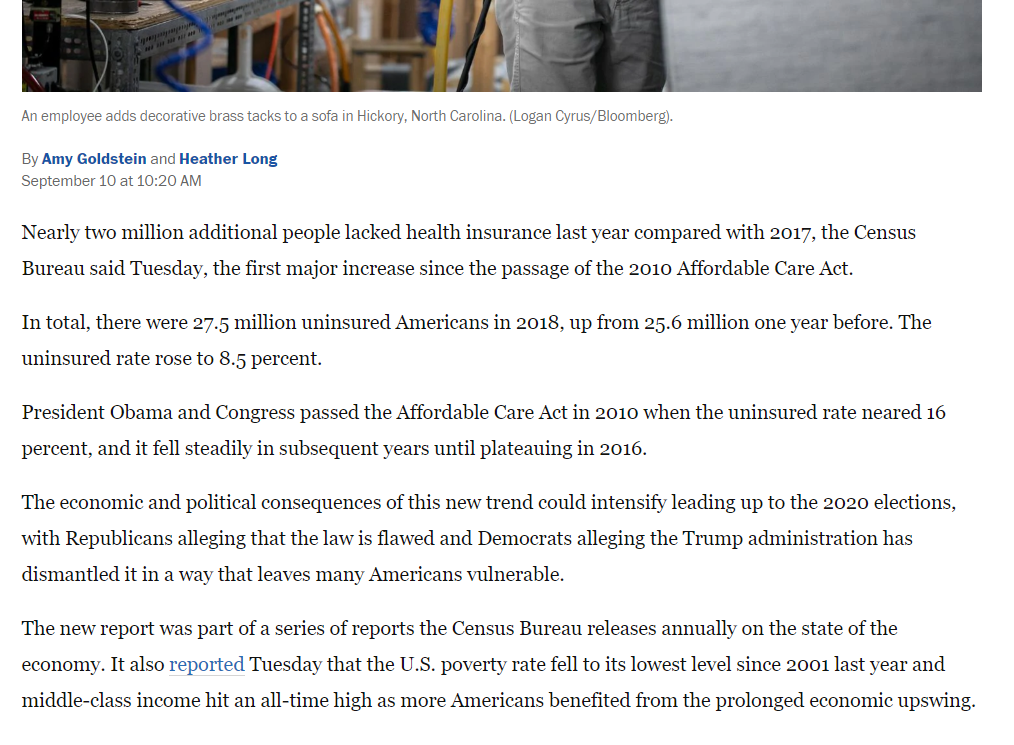 WaPo revised its article to turn the focus on the high number of uninsured people in 2018. (Screenshot Washington Post)

About two hours after this update, WaPo changed its copy for a third time. This time, the beginning of the story read that “The proportion of Americans without health insurance grew significantly last year for the first time this decade.” The comments about Obama and potential implications about “economic and political consequences” were removed.

It touted the low poverty rate because of Trump, but added that the numbers are “roughly the same as middle-class income in 1999 after adjusting for inflation.”

“Median household income today is right where it was in 1999. Two decades with no progress for the middle class,” University of Michigan economist Justin Wolfers said according to WaPo, who added in this comment in the third edition of the article. 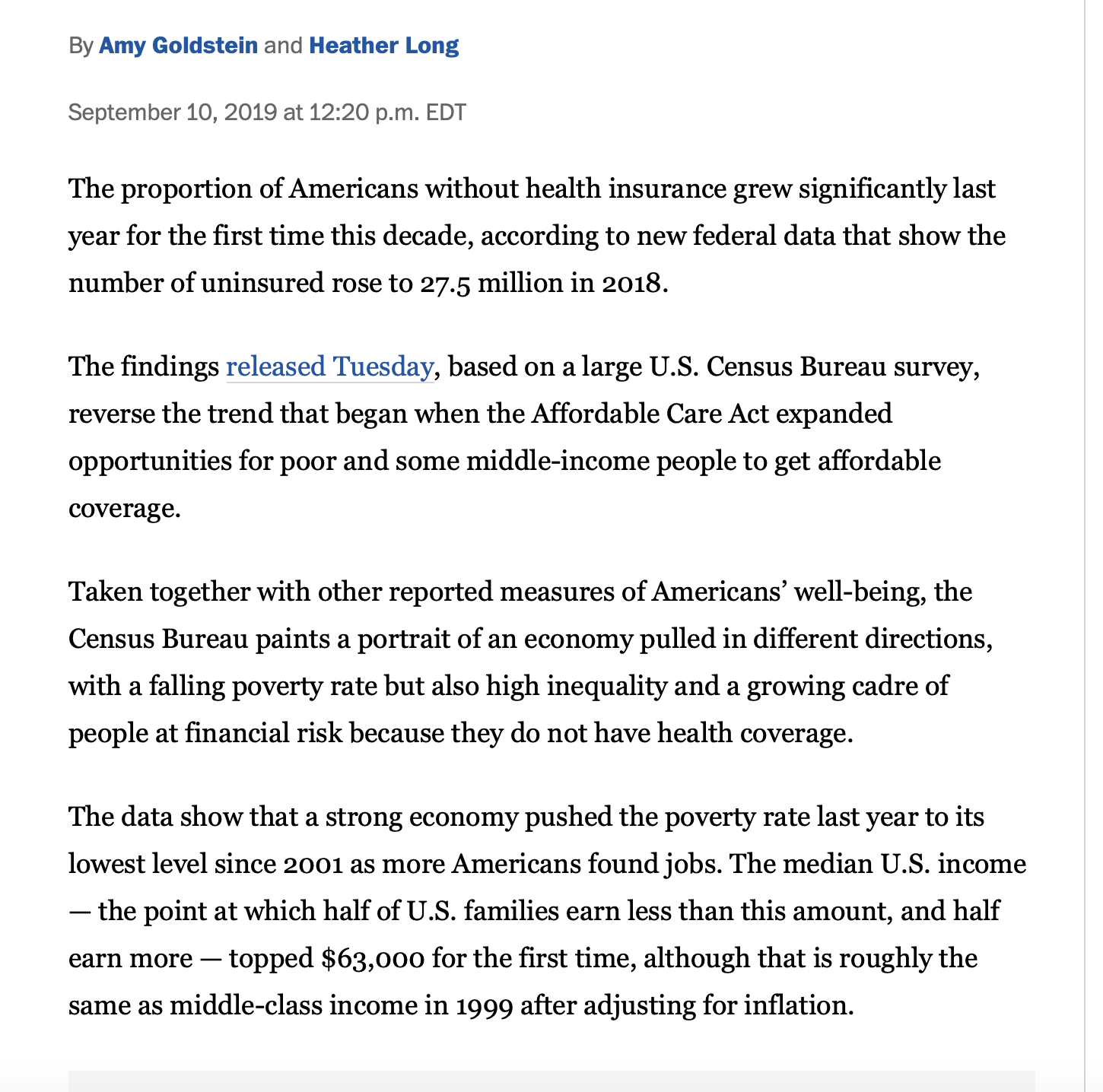 The third edition of this WaPo story reads differently than the first two. (Screenshot Washington Post)

WaPo’s article was slightly altered for at least a fourth time after this. Most of the copy remained the same, but some of the wording was changed in the latest update. The headline now reads, “More Americans go without health coverage despite strong economy, Census finds.”

“Reporters and editors work on these stories to get them published as quickly as possible and then continue to dig in deeper after the stories initially post,” Molly Gannon Conway, Manager of Communications at WaPo, told the DCNF. “In this case, it became clear that the bigger news was the first increase in the uninsured rate since the passage of the ACA.”

“The decrease in the poverty rate, while important, is less newsy because it represents the continuation of an existing trend. The story has been updated to reflect that,” she added.

WaPo did not issue any update notice at the time of reporting, despite all of the changes.