New York Democratic Rep. Alexandria Ocasio-Cortez called for Supreme Court Justice Brett Kavanaugh to be impeached in a tweet Monday, then deleted it, then posted it again.

“This was almost a year ago,” Rep. Ocasio-Cortez said, quote tweeting a video of her speaking out against Kavanaugh’s nomination.

“It is unsurprising that Kavanaugh, credibly accused of sexual assault, would lie under oath to secure a Supreme Court seat. Because sexual assault isn’t a crime of passion–it’s about the abuse of power,” the congresswoman wrote.

“He must be impeached.”

The tweet was deleted not long after it was posted. The Daily Caller saved a screenshot of the tweet before it was deleted: 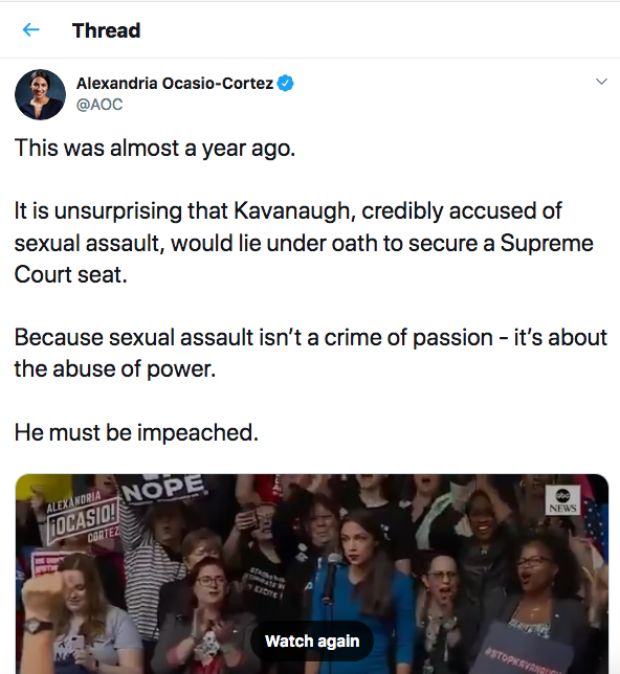 The tweet was then posted once again, without explanation.

This was almost a year ago.

It is unsurprising that Kavanaugh, credibly accused of sexual assault, would lie under oath to secure a Supreme Court seat.

Because sexual assault isn’t a crime of passion – it’s about the abuse of power.

Many Democrats have called for Kavanaugh to be impeached over new, thinly-sourced allegations.

Kavanaugh was confirmed to the Supreme Court last year after a contentious round of Senate hearings, including the testimony of Christine Blasey Ford, a woman who claimed that Kavanaugh sexually assaulted her at a party when the two were teenagers. (RELATED: Nine Times The Media Pushed Misinformation About Kavanaugh)

Nearly a year after his confirmation, the New York Times published a piece that included a new allegation of sexual assault against Kavanaugh, alleging that during a “drunken dorm party,” Kavanaugh’s pants were down and his friends “pushed his penis into the hand of a female student.”

The story fell apart over the weekend, as the Times issued a correction that said that the alleged victim “declined to be interviewed and friends say that she does not recall the incident.”

President Trump came to the defense of Kavanaugh, saying in a tweet thread that his second Supreme Court pick was an “innocent man who has been treated HORRIBLY.”

“Brett Kavanaugh should start suing people for liable, or the Justice Department should come to his rescue. The lies being told about him are unbelievable. False Accusations without recrimination. When does it stop? They are trying to influence his opinions. Can’t let that happen!” Trump said.