During a speech at the Hill Center in Washington, D.C. last week, media veteran Bill Press interviewed Acosta about his role in the media during the Trump era and Acosta’s new book, “The Enemy of the People: A Dangerous Time to Tell the Truth in America.”

In video obtained by The Daily Caller, Acosta trashes America, wondering if the country is still the same place his family immigrated to.

“The question that I ask all of you is, what are you doing on a daily basis to make sure that we’re passing on to the next generation of our kids and grand kids a better country than the one that we have right now?” Acosta said.

He bemoaned the fact that Trump called the media the “enemy of the people,” and wondered who Trump would target next.

Acosta also talked about his own family history:

“And my concern is, is that we’re tearing each other apart. And this is the country I love to–my dad as I said earlier came over to this country from Cuba came over here in 1962, three weeks before the Cuban missile crisis. Moved to Northern Virginia which is where I grew up. I’m a Fairfax County native. I was born at Fairfax County hospital, my mom was born at the Washington Women’s Hospital in Georgetown, her parents are buried at Arlington National Cemetery.”

“And my dad tells me the story that when he came to this country he was, he was taken out of the classroom by a teacher who would teach him how to read and write English. There was a Presbyterian church in Vienna, Virginia that gave my dad and my grandmother coats and sweaters so they could stay warm in their first winter here in the D.C. area. They had never been cold before.”

“Are we still that country anymore? Did John F. Kennedy call immigrants rapists and criminals back then? No. I think we have to take stock of where we are right now and ask ourselves whether or not we’re leaving that better country that, Bill you say that we’re going to be leaving to our kids and grand kids–whether we’re in fact doing that, or whether that’s just lip service.”

The CNN reporter has had a very strained relationship with the Trump White House. 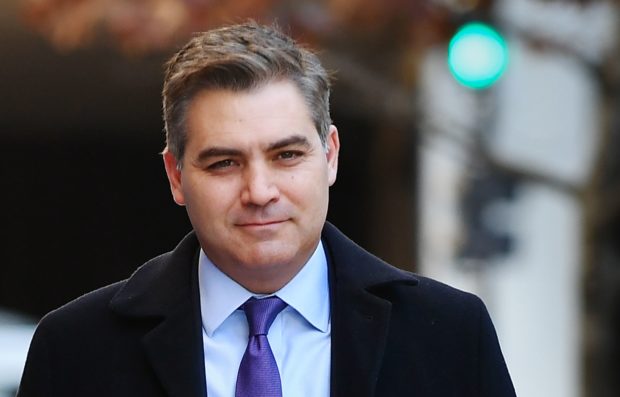 Acosta and former White House press secretary Sarah Sanders often traded barbs, and last fall, the White House attempted to ban him, a move that was stopped following a CNN lawsuit. (RELATED: Trump Goes Off On Acosta, Who Refused To Hand Mic To Female Staffer)