Almost immediately after President Donald Trump announced Tuesday that he would authorize the release of a transcript of his phone call with the Ukrainian president, some Democrats and members of the media began speculating that the White House might release a doctored transcript.

Trump announced he would authorize the transcript’s release on Wednesday, as House Democrats have laid the groundwork to try to impeach him for urging Ukrainian President Volodymyr Zelensky to investigate former Vice President Joe Biden’s son’s work for a Ukrainian energy company during the Obama administration.

“I am currently at the United Nations representing our Country, but have authorized the release tomorrow of the complete, fully declassified and unredacted transcript of my phone conversation with President Zelensky of Ukraine,” Trump tweeted Tuesday.

“You will see it was a very friendly and totally appropriate call. No pressure and, unlike Joe Biden and his son, NO quid pro quo! This is nothing more than a continuation of the Greatest and most Destructive Witch Hunt of all time!” the president added. (RELATED: MSNBC Anchor Said There Is No ‘Evidence’ Biden Pressured Ukraine, But Biden Admitted To Doing So In 2018)

Some Democrats and members of the media floated the possibility that the administration would release a doctored version of the transcript.

“Given what we know about how Trump pressures and manipulates civil servants to tow his line, I’m not *quite* sure we can trust the transcript itself as being accurate/comprehensive,” liberal MSNBC host Chris Hayes wrote on Twitter.

“Trump White House has released edited transcripts before. That means they can’t be trusted. That means we need the whistleblower’s complaint, which legally should be in the hands of Congress by now,” wrote contributing op-ed writer for the New York Times, Wajahat Ali.

“Hard to imagine the average person putting much trust in a transcript released by a president who edited a weather map with a sharpie,” added Jackson Proskow, the Washington bureau chief of Canadian network Global News.

“The word of a man who drew on a weather map with a sharpie and lied to the American people thousands of times is not going to cut it,” Beyer wrote on Twitter.

“Even if we could trust a guy who altered a weather map with a sharpie to turn over an unredacted transcript of a phone call … we still need the entire whistleblower complaint, the witness, and the timeline of who covered up when,” she tweeted. 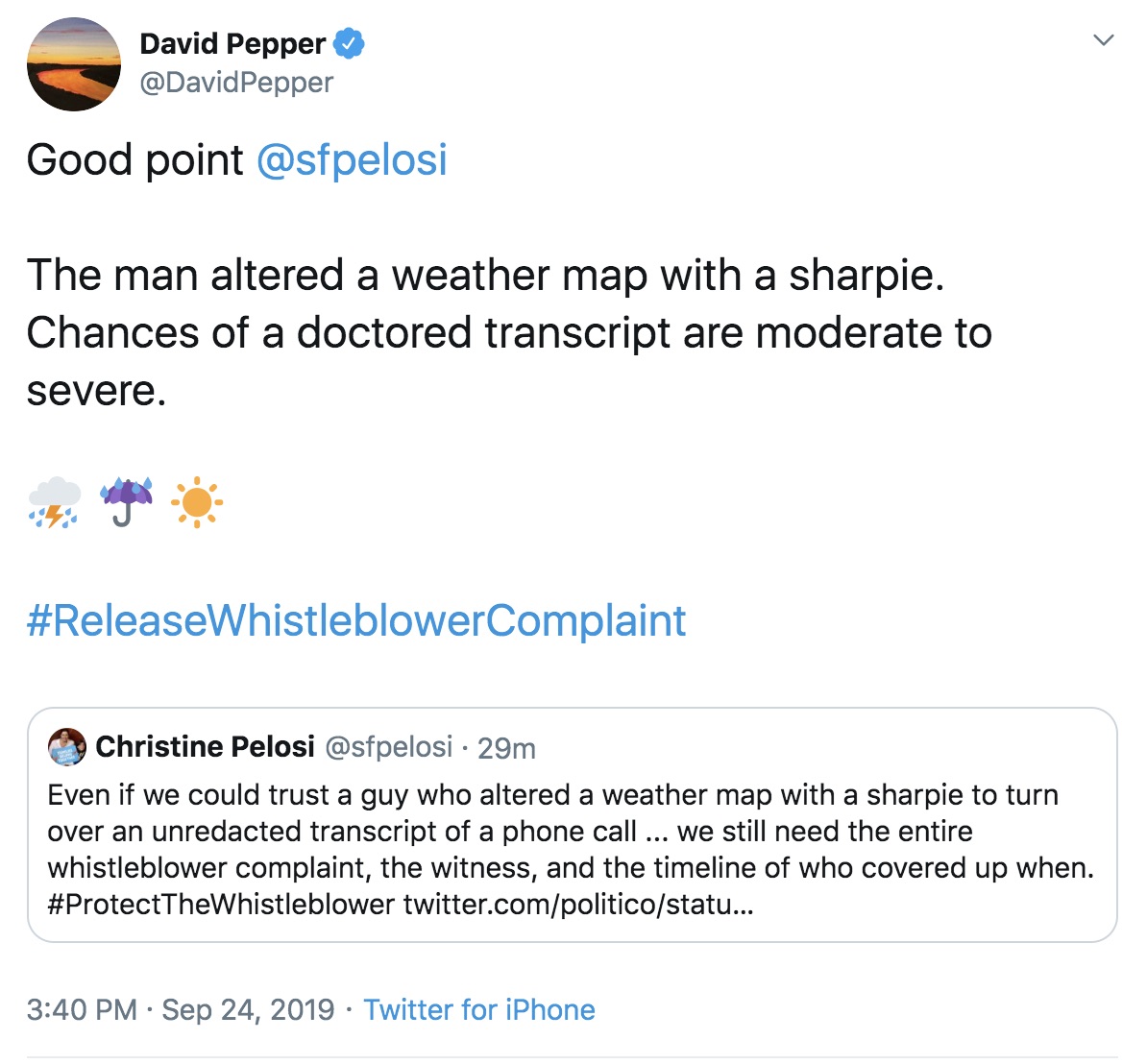 “The man altered a weather map with a sharpie. Chances of a doctored transcript are moderate to severe,” added David Pepper, the chairman of the Ohio Democratic Party.