The president said Thunberg “seems like a very happy young girl looking forward to a bright and wonderful future,” adding, “So nice to see!”

She seems like a very happy young girl looking forward to a bright and wonderful future. So nice to see! https://t.co/1tQG6QcVKO

However, Trump’s words were likely laced with sarcasm, as he was responding to a video of Thunberg’s UN speech on climate change in which she spoke of suffering and extinction because of the inaction of world leaders.

“People are suffering, people are dying, entire ecosystems are collapsing. We are in the beginning of a mass extinction and all you can talk about is money and fairytales of eternal economic growth,” Thunberg said Monday in front of the General Assembly.

Thunberg also accused world leaders of stealing her dreams and her childhood by refusing to tackle the threat of climate change, which she claims will cause irreversible damage to the planet in the next decade or so. 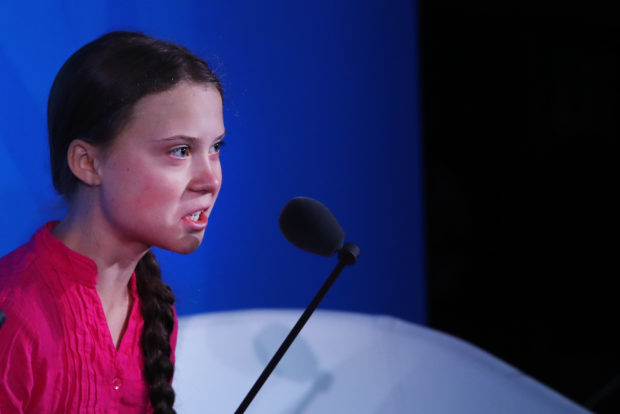 NEW YORK, NEW YORK – SEPTEMBER 23: Greta Thunberg speaks at the United Nations (U.N.) where world leaders are holding a summit on climate change on September 23, 2019 in New York City. While the U.S. will not be participating, China and about 70 other countries are expected to make announcements concerning climate change. The summit at the U.N. comes after a worldwide Youth Climate Strike on Friday, which saw millions of young people around the world demanding action to address the climate crisis. (Photo by Spencer Platt/Getty Images)

Trump and Thunberg have not spoken in person, although they crossed paths early on during the conference. Thunberg could be seen glaring at the president from afar as he spoke to reporters Monday before making a surprise appearance at the UN’s climate action summit. (RELATED: Trump Makes Surprise Visit To UN Climate Summit Before Holding Meeting On Religious Freedom)

The teen activist previously said she does not wish to meet with Trump because she does not believe he would listen to what she has to say.