“How often do you think Donald Trump is 100% completely naked? Aside from bathing and showering, I’d guess not a lot. Anyway, just something to think about.”

PRESIDENT TRUMP: “I used to be the king of great press.” — Wednesday afternoon presser.

Ana Navarro, The View, CNN: “Flight Attendant to me right now: Girl, please. It was about time for Nancy to act. Republicans impeached Bill Clinton for lying about a blow-job. Now, they’re offended Democrats doing an impeachment inquiry over abuse of power. They got no damn shame. I flight attendants.”

Greg Gutfeld, The Five, FNC: Flight attendant to me right now: ‘I was reading this tweet below, and she made this shit up. No flight attendant talks like that. anyway, we have wine, beer or Prosecco. Love the Five.’

“I’ve been having a lot of migraines recently, which is physically and emotionally very draining. but I am very lucky to have paid time off, which many migraine sufferers & other chronically ill people don’t have. The lack of PTO in America is a disgrace.” — Libby Watson, Splinter News.

She writes more in-depth about her extreme suffering here. Worth a read.

Chance of a Lifetime: Go Hunting With Donald Trump Jr.

Where: The woods of Pennsylvania. (Don’t worry, you’ll be with Don. What could possibly go wrong?)

Why: Because he’s “one of the most passionate and influential outdoorsmen you’ll ever get a chance to meet.” They’ve given him the nickname of the “modern-day Teddy Roosevelt.”

Do you need to be a hunter? No. They’ll make sure you have a memorable time.

What will you learn? “Gain a new perspective on real-life conservation from one the leading experts on the subject, all while you hunt one of the most popular big game animals on earth.” (Um, really????!!!!!)

Where you’re money will go? To Hunter Nation, which promises to fight for your “hunting lifestyle” and all “Traditional American Values”  that include “God, Family, and Country.”

What will you be killing with Don Jr.? Whitetail deer.

When is the trip? In December. Exact dates TBD.

What kind of ice cream is Joe Biden?

These reporters are REALLY grateful

Siraj Hashmi, Washington Examiner: “I know I don’t say this enough on this here website, but I love you all.”

Ben White: I’ve been at @politico for ten years now, making it my longest tenure eclipsing the Wash. Post. And man it’s been a great ride and I’m super grateful for the place.”

Byron Tau, WSJ: “I sent Lyft a complaint about a driver trying to run me off the road on May 12th, with the full license plate. They did nothing. They didn’t even answer my DM.”

“Hey @lyft, your driver with D.C. tags FY1910 is a danger to other road users. And by the look of the city’s database, almost $1,300 in unpaid tickets for speeding, blocking bike lanes, etc.” — Martin Austermuhle, reporter, WAMU.

@lyft: “Hey there, please DM us the phone number and email address associated with your account. We want to make sure that this matter is investigated and addressed.”

Even Brit Hume thinks Trump’s claims about NYT are bogus

Peter Baker, NYT: “Fact check: The @nytimes makes plenty of money. Also has more readers than anytime in history. In case anyone tells you differently.”

Brit Hume, FNC: “Trump’s claims about the NY Times losing money are so easily checked that one wonders why he keeps repeating them.”

Joe Nocera, columnist, Bloomberg Opinion: “Peter, the subscription numbers are fabulous. Congrats to all. But $30 million in quarterly earnings in *not* ‘plenty of money.’ Important to see the state of the news business clearly.”

Food writer is picky about his shrimp

“I really fucking LOVE the kung pao shrimp from one specific restaurant, but it costs $25.
Can’t decide if I am worth it or not tonight. I blame New York City for putting me in this situation.” — Shay Spence, food editor, People.

“My debit card was canceled yesterday because someone in Michigan tried to buy horse joint powder with my info. In case you were wondering.” — Audrey Conklin, Daily Caller News Foundation.

“You know what’s an ‘impeachable offense?’ whatever the hell Congress says it is. if you hear anybody saying they have to “investigate further” to make a determination that its impeachable, that’s bullshit. Impeachment is a political act, there’s not a criminal statute.” — Oliver Willis, writer, ShareBlue.

“Let me confess something that bothers me — I don’t trust the media to get the Trump-Ukraine story right. But I also don’t trust conservative media outlets to do anything other than provide spin.” — Erick Erickson, conservative radio host, The Resurgent.

Cranky… “Good morning to everyone except those who stalled an ambulance outside my apartment this morning.” — Ben Smith, digital communications, formerly Washington Examiner and The Daily Caller.

Say this to Yashar and he may block you

“A friend called their coffee ‘Morning Joe,’ the other day and I considered blocking them.” — Yashar Ali, HuffPost, New York Mag.

Who does she think she is?

“Stop naming your babies Olivia. There are too many of us now.” — Olivia Nuzzi, New York Mag. 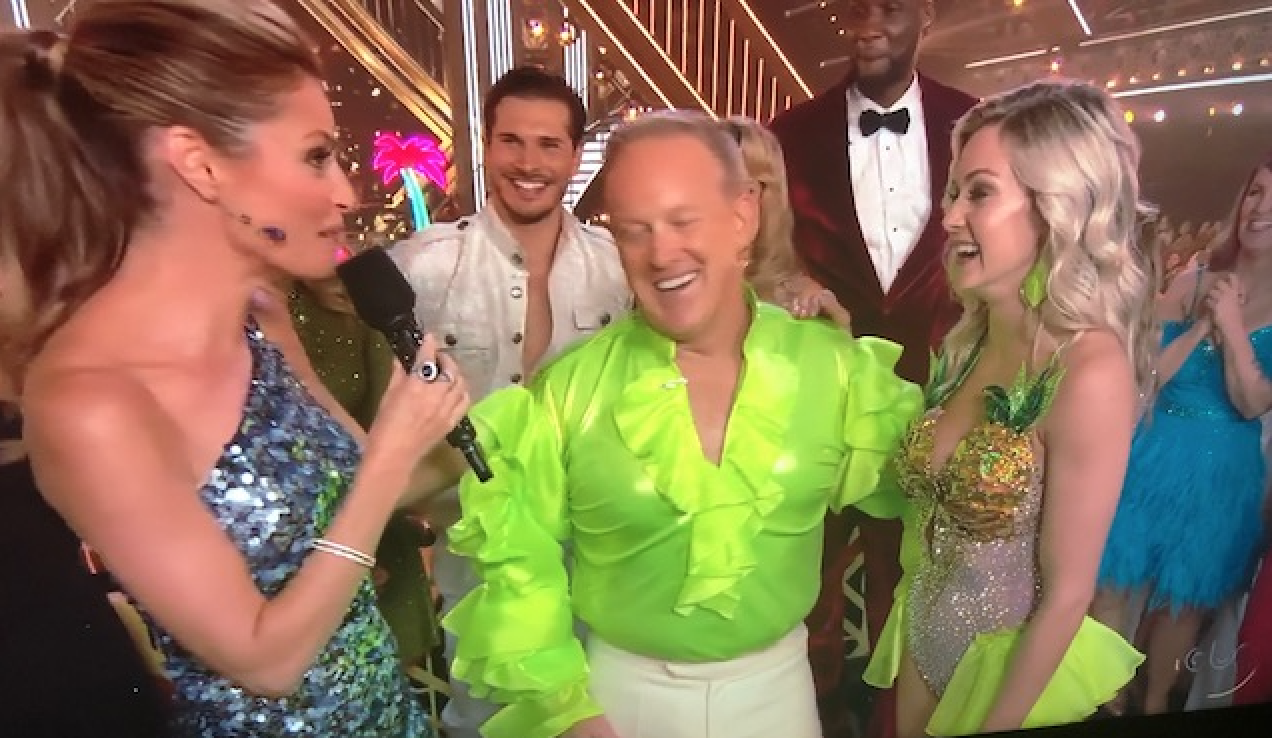 Sean Spicer is auctioning off the lime green blouse… Go to SpicerArnold.com to make a bid for it. Proceeds will go to caregivers of injured service members. He says it has “great Halloween costume potential.” (RELATED: Spicer Debuts On ‘DWTS’ In Puffy Shirt)

“I know we’ve had a lot of news today, but I’ve got more… finally bought a pair of those AllBirds sneakers that everyone seems to like.” — Dave Weigel, Washington Post.

TMI? “I tend to wear Clarks when I’m reporting (where fashion standards are basically “make sure you wear pants”) but the soles wear down like a gd time-lapse video so I wanted something with comfort and sturdiness.”

CBS’s John Dickerson cracked, “If, after you put them on, you feel like you are about to be escorted to a ward of some kind, that’s perfectly natural.”

Josh Marshall, TPM: “Dude, thanks for keeping us posted on this. lot to absorb.”

“Went into a smoke shop Friday at Columbia Heights in order to buy cigarettes. The store only sold marijuana. Extremely cringe. Do not like the direction society is taking.” — Joe Gabriel Simonson, Washington Examiner.

In other Ben Dreyfuss news… “I used to know this person from South Carolina who told me that when she grew up she loved to walk down the beach eating a stick of butter like it was a corn dog. I was shocked that someone could want to do that but I was more shocked that she was willing to tell me about it.”

Also this… “The dumbest place on Earth is the replies to Maggie Haberman’s tweets.”

Unsolicited advice for the media… “Dear Media: Please stop getting this story wrong. IT DOES NOT MATTER IF THERE WAS A QUID PRO QUO. THE REQUEST ITSELF IS THE IMPEACHABLE CONDUCT. Thank you for coming to my Ted shouting at the top of my lungs Talk.” — Tom Nichols, professor, Naval War College.

My mom just checking in about our guest today. pic.twitter.com/xflIWK8O5N

“The final season of @VeepHBO will go down as a seminal brilliant masterpiece of television @DavidHMandel for his stewardship and writing and @OfficialJLD will be remembered for her flat out brilliance, an acting tour de force this season. So fuck you, Emmy voters.” — Norm Ornstein, resident scholar, American Enterprise Institute.