“At a restaurant in New York’s Upper Westside, the couple beside me went from the husband unloading on the wife about how much he hated Trump & could at least respect Bush to the wife threatening the husband over how many books he has and that it’s bankrupting them. Really wild.”

More wild: “Completing the night is that I stained my shirt and used Tide to go, making it looked like I’m leaking from my nipples… you’re welcome everyone.” — Girdusky.

MOOD: “We have one question: Where in the hell is the Republican Party? Now is not the time to fold and go cold!” — Diamond and Silk, pro-Trump cheerleaders.

“I’m pretty sure the girl near me at the airport has said ‘like’ at least 56 times in like the last 5 minutes.” — Cameron Cawthorne, media writer, Washington Free Beacon.

Politico has a temporary personality transplant

Since when does Politico run a non-PC headline like this?!?! 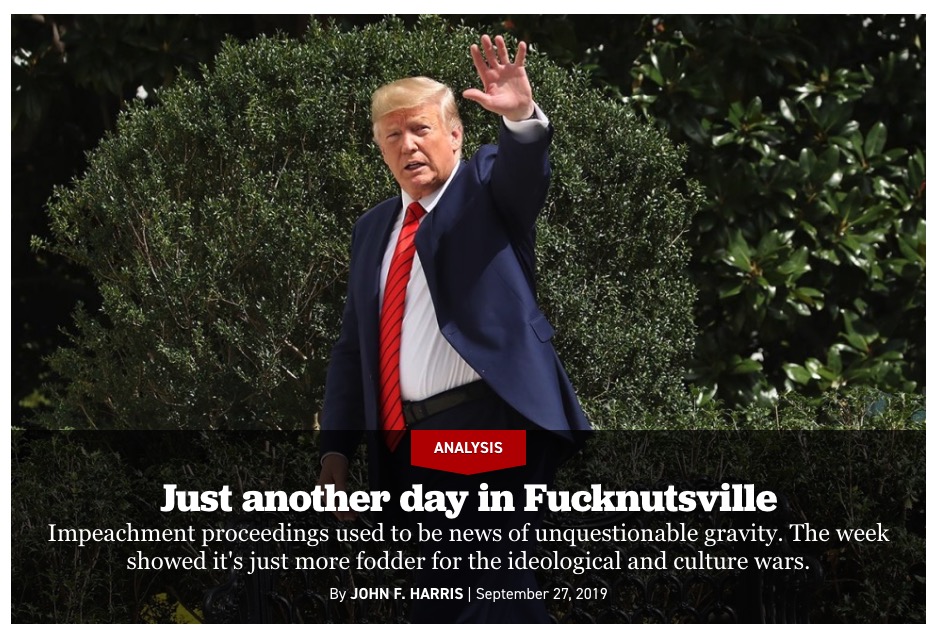 This is how it looks now…

Christian Datoc, audience development, The Daily Caller: “POLITICO WHY DID YOU CHANGE THE HEADLINE IT WAS SO MUCH BETTER BEFORE?”

“Complete side note: Steve Scalise is walking on the house floor without the help of a cane. Pretty remarkable given where he was 2 years ago.” — Jake Sherman, Politico Playbook writer.”

“Normally IC whistleblowers really do face the prospect of retaliation. This time, I suspect once the whistleblower’s identity is known, he will be celebrated as a hero by the resistance, offered a cushy tv contract and headline gala dinners for the next 20 years.” — Eli Lake, columnist, Bloomberg Opinion.

“After I published the blog post about Uber, there was a solid year of people trying to dig up dirt on me. It was exhausting and, frankly, terrifying. Well, it looks like it is starting up again, in advance of my book coming out in a few months. …I’m not surprised – there are a lot of powerful people and institutions who are afraid of what I have to say. But like, come on. We *just* did this. I’m tired. If you wanna know something, just ask. I’m honestly too tired to care anymore. …Like, I will do an AMA and literally tell you any and all dirt I have on myself. That’s the level of how tired I am of this crap right now.”

Fowler blew the whistle on the alleged sexual harassment and retaliation she experienced while working as an entry-level engineer at Uber. Her book, Whistle Blower: My Journey To Silicon Valley And Fight For Justice At Uber, comes out in 2020.

“It’s honestly impossible to adequately explain in a tweet, in a story, in a cable news segment how deranged Fox prime time has become. Totally untethered from reality.” — Oliver Darcy, media writer, CNN.

ABC “The View’s” Sunny Hostin: “Adam Schiff is the man. He is fantastic.”

Meghan McCain (self-inflated): “With all due respect he doesn’t need you, he needs me.”

“I pray the whistleblower isn’t a woman. The smears, the threats and slime the GOP will throw at the whistleblower will be horrible, but it will be even more horrendous if it’s a woman because of the uncontrollable misogyny that is the lifeblood of Trump and his acolytes.” — Bette Midler, actress, singer. (Journalists Thump Trump For Calling Bette Midler A ‘Psycho’)

Rob Reiner, Hollywood filmmaker, actor: “Rarely do you have the criminal say: ‘Look at me! I’m committing a crime! And now watch me cover it up!’ Only a fucking moron has that unique talent.”

Ellen‘s producer needs your help: “I’m on day 2 of no JUUL. Can someone come to my house and read the whistleblower complaint to me since I can’t see straight and feel like I want to tear my skin off?” — Andy Lassner.

Evergreen: “If Rudy Giuliani’s family loves him, they will get him help now. Not tomorrow. Now.” — Elise Jordan, political analyst, NBC News, MSNBC.