“Hitting ‘reply’ without first checking what autocorrect did to your tweet is like driving to work then finding out you forgot to put on your pants.”

— Jamie Schler, food writer, anti-Trump, The Washington Post, who has otherwise been chatting about glazed cream puffs, meatballs, and cookies.

There’s a mouse in the White House

“In other news: A mouse literally fell out of the ceiling in our White House booth and landed on my lap.” — Peter Alexander, NBC News White House correspondent.

The story gets the TMZ treatment….here.

MOOD: “It’s wild to me how people crawled over my 60 mins interview with a fine-toothed comb to find any word or reason to claim I’m unfit for the job, yet here Kevin McCarthy (the GOP Leader!) is a bumbling, sloppy, dishonest mess & his mediocrity is accepted as a matter of course.” — Rep. Alexandria Ocasio-Cortez (D-N.Y.

HuffPost writer gets scolded at his elementary school reunion

“Three people at my elementary school reunion Saturday: “We don’t think it’s appropriate you use social media to talk about politics.’ Me: ‘Yeah. Great. Persons I haven’t seen in 41 years. Fuck you. That’s what I use social media for.'” — Bryan Behar, TV writer, HuffPost blogger.

Rhetorical Q: “Is it so wrong of me to want to see that smug smirk replaced by fear on #BillBarr’s face?” — Peter Daou, former Clinton and Kerry adviser.

The WHAT happening at Fox News?

“The cleavage happening at Fox News over this is pretty wild.” — Chris Hayes, professional boob, MSNBC.

“In my endless quest to find good places to work that are not my apartment, where, due to the presence of my roommates TV and Bed, I cannot get anything done: I am accepting recommendations for good spots in Manhattan. You can DM.” — Lisa Tozzi, former global news director, BuzzFeed.

Elizabeth Thorp is the EIC of PYPO, a female comedy site. She also played Sec. of Defense Maria Ford on House of Cards. 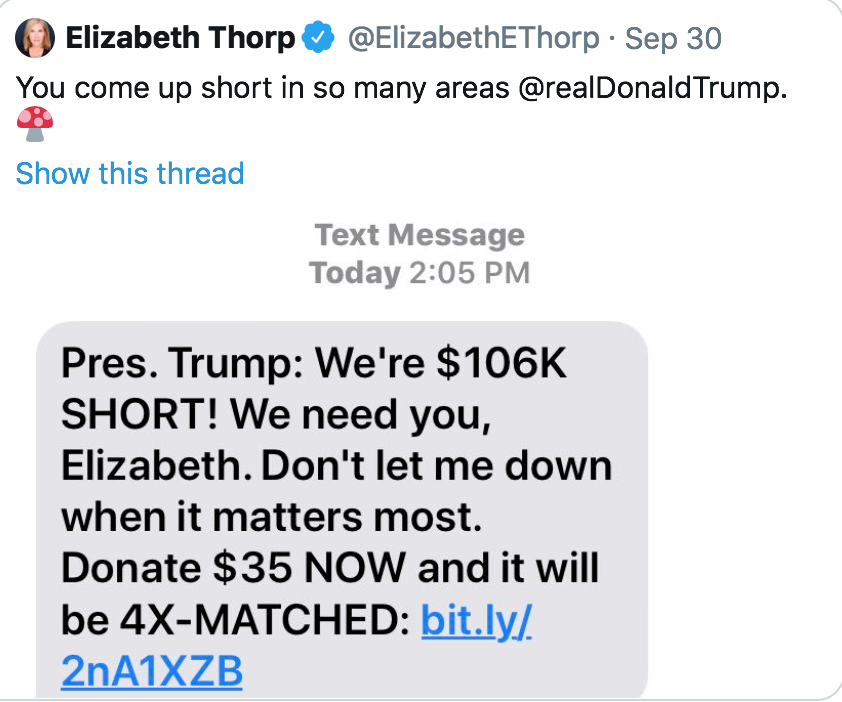 He thought he had an important video call (it got moved) and this was @samsanders’s outfit for it. (Yes I got his permission.) pic.twitter.com/taO8TAqaP2

Ex-employee knocks Newt, tells him to ‘shut up’

“Newt Gingrich, who was once my employer, should never ever talk about impeachment being a sham again. This is the guy who impeached President Clinton for having an affair, while he himself was conducting an affair with a committee staffer while his wife had cancer. Shut. Up.” — Jessica Corbett, ex-GOP fundraiser.

“Just want to say that ⁦‪@edhenry‬⁩ is a total jerk. He gave only PART of his liver to his sister. Who keeps some of their liver for themselves?” — Kat Timpf, National Review.

“Earlier this morning, I misspoke and mistakenly equated nationalism with white nationalism. After rereading my tweet, and the good-hearted criticism it prompted, I realized my error. 17 or 37 – I will never be too young or too old to admit when I’ve gotten it wrong.” — CJ Pearson, pro-Trump teen activist.

“Buddy, have I got news for you!” — New York Mag’s Olivia Nuzzi in response to “Mike” who wrote, “So, Ryan Lizza is writing a book with Olivia Nuzzi. What are the odds that these two left of center ‘journalists’ are flirting and being inappropriate with each other?”

Newsman Dan Rather: “I’ve seen a lot in my lifetime. But I’ve never seen anything like this.”