The University of Oklahoma (OU) passed a resolution last week with a 15-11 vote that removed the Pledge of Allegiance from their agenda.

The resolution states that the Pledge of Allegiance is incompatible with the Constitution because “pledging your allegiance to the flag of the United States as one nation under God conflicts to our rights to free exercise of religion, freedom of speech, and to petition the government for redress of grievances.” (RELATED: Elementary School Puts Pledge Of Allegiance Back Into Morning Meeting After Backlash) 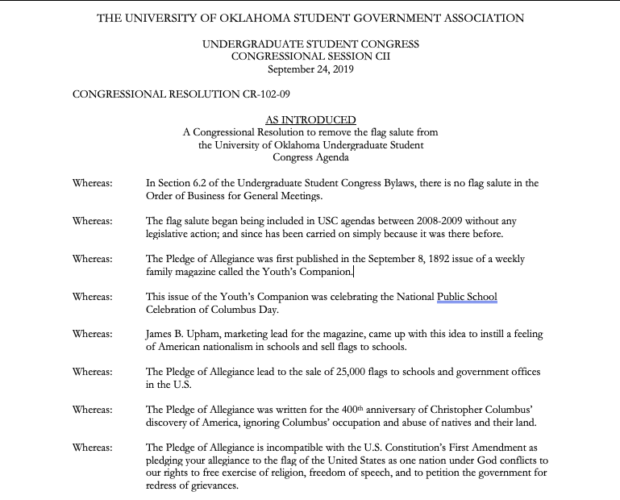 Gabi Thompson, a senior at OU and author of the resolution, justified the change to KFOR in Oklahoma saying, “For us to be like the best most inclusive body, I thought that we should remove it.”

“It was written as a celebration of Columbus Day in 1892, and in the city of Norman we don’t celebrate Columbus Day, we celebrate Indigenous People’s Day,” Thompson continued.

The OU College Republicans released a statement to Instagram saying,

“We recently learned about a resolution in the SGA that pertains to removing the pledge of allegiance from SGA meetings. We are disheartened by this move. While we respect everyone’s right to not say the Pledge of Allegiance, we would urge them to do otherwise. The Pledge of Allegiance transcends partisanship, race, ethnicity, and all of the divides in our country. It reminds us that though we may disagree, or look different, or not worship the same, we are one nation, indivisible.”

The hostility towards the pledge is not just a recent phenomenon. An angry crowd in Minnesota started chanting “USA!” after the city council voted to ban the Pledge of Allegiance for diversity reasons. A professor in California is suing Santa Barbara Community College after she was heckled for supporting the Pledge. A substitute teacher from Missouri claimed he was not allowed back to speak after thanking the students for saying the Pledge.