Preparing students to enter the workforce and be good citizens ranks higher for most Americans than prepping them to go to college, according to a recent RealClear survey. 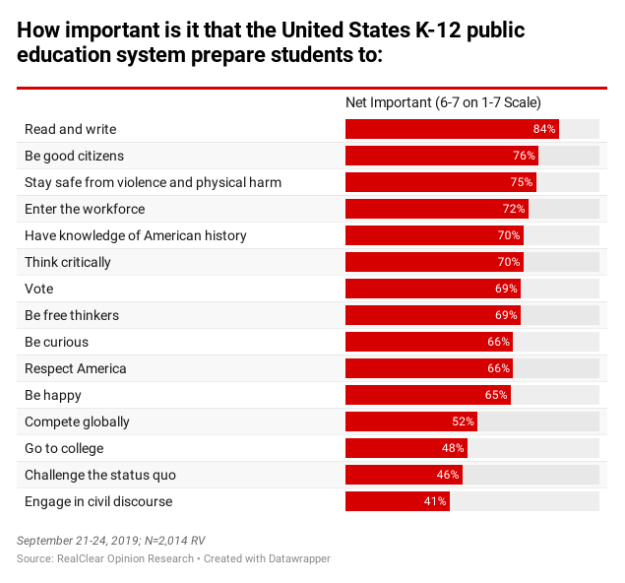 The top three priorities for students in public schools, according to the survey with a credibility interval of  +/- 2.38 percentage points, were: reading and writing skills (84%), being good citizens (76%) and staying safe (75%). Entering the workforce came in fourth with 72% net importance.

RealClearPolitics Washington Bureau Chief Carl Cannon added during the conference call that “the presumption that four-year college is the necessary next step is not … for everyone.”

Several 2020 Democratic presidential candidates such as Vermont Sen. Bernie Sanders are campaigning on policy ideas to make public college free and eliminate all existing student debt. Other candidates have similar policy ideas that would eliminate tuition and debt for select students and graduates based on income, according to U.S. News & World Report. (RELATED: Most Americans Don’t Support Making College Free)

And we should make public colleges and universities tuition-free. This is not a “radical” idea. Here is how we do it: https://t.co/gd3TPjg5CA

Cannon told the DCNF that promoting ideas like free college and canceling student debt all depends on the framing of such issues.

A proposal for free college for everyone everywhere, for example, won’t appeal as much to voters as a more specific idea to bring down the cost burden of higher education — especially for low- and middle-income families — would, Cannon said.

2020 Democratic presidential candidate Andrew Yang, for example, has a policy proposal on his campaign website that promotes vocational education.

“College is being over-prescribed in this country. Not everyone has an interest in obtaining a college degree, and there are many jobs out there that don’t require it. Georgetown has estimated that there are 30 million good-paying jobs that don’t require a college degree. … As a country, we need to dramatically increase our investment in vocational training,” Yang’s proposal reads.

The RealClear survey also found that most registered voters are dissatisfied with the U.S. public education system overall, with 29% of respondents saying they expect the U.S. public school system to be “solid” but “not the very best” in the next 20 years, and 30% of voters saying they expect it to be just “average.” Only 13% believe the system will be a model of excellence by 2040.

“Looking ahead on education, few people are optimistic about the future,” poll designer and director John Della Volpe said, according to RCP. “Only about one in 10 voters believe America’s K-12 education will be a model of excellence by 2040.”