For much of Russia’s post-Soviet history, communists and other leftists found themselves on the political margins. That is starting to change.

During Russia’s recent regional elections, the Communist Party made major gains at the Kremlin’s expense ⁠— the second year in a row that it did so. Communists also played a major role in organizing mass anti-Kremlin protests that rocked Russia two summers ago. Beyond politics, a growing number of Russians feel nostalgia for the USSR and even for Soviet dictator Joseph Stalin.

Russia’s left is experiencing a resurgence at a time when the country faces major economic challenges. Years of recession followed by stagnant growth have delivered a sharp blow to the Russian middle class. Since 2014, the number of Russians who identify as middle class dropped from 60% to 47% percent due to falling real incomes. Another report found nearly half of Russian families said that they only have enough income for essentials like food or clothing. (RELATED: NYT: CIA Extracted Kremlin Spy From Russia Because Of Media Reports, Not Trump)

The Kremlin’s response to these economic troubles has only deepened public discontent. When the Russian government announced in the summer of 2018 about its plans to raise the pension age, an overwhelming majority of Russians expressed outraged. For the first time in nearly a decade, Russians all across the country attended mass demonstrations to voice their opposition to the pension reform program.

Amidst these economic woes, a growing number of Russians are looking back fondly at the Soviet era as time when the state took care of its citizens. Russia’s top independent polling agency recently found that 59% of Russians stated that during the Soviet Union the government showed concern for ordinary people. In 2008, a mere 29% of respondents gave the same answer. 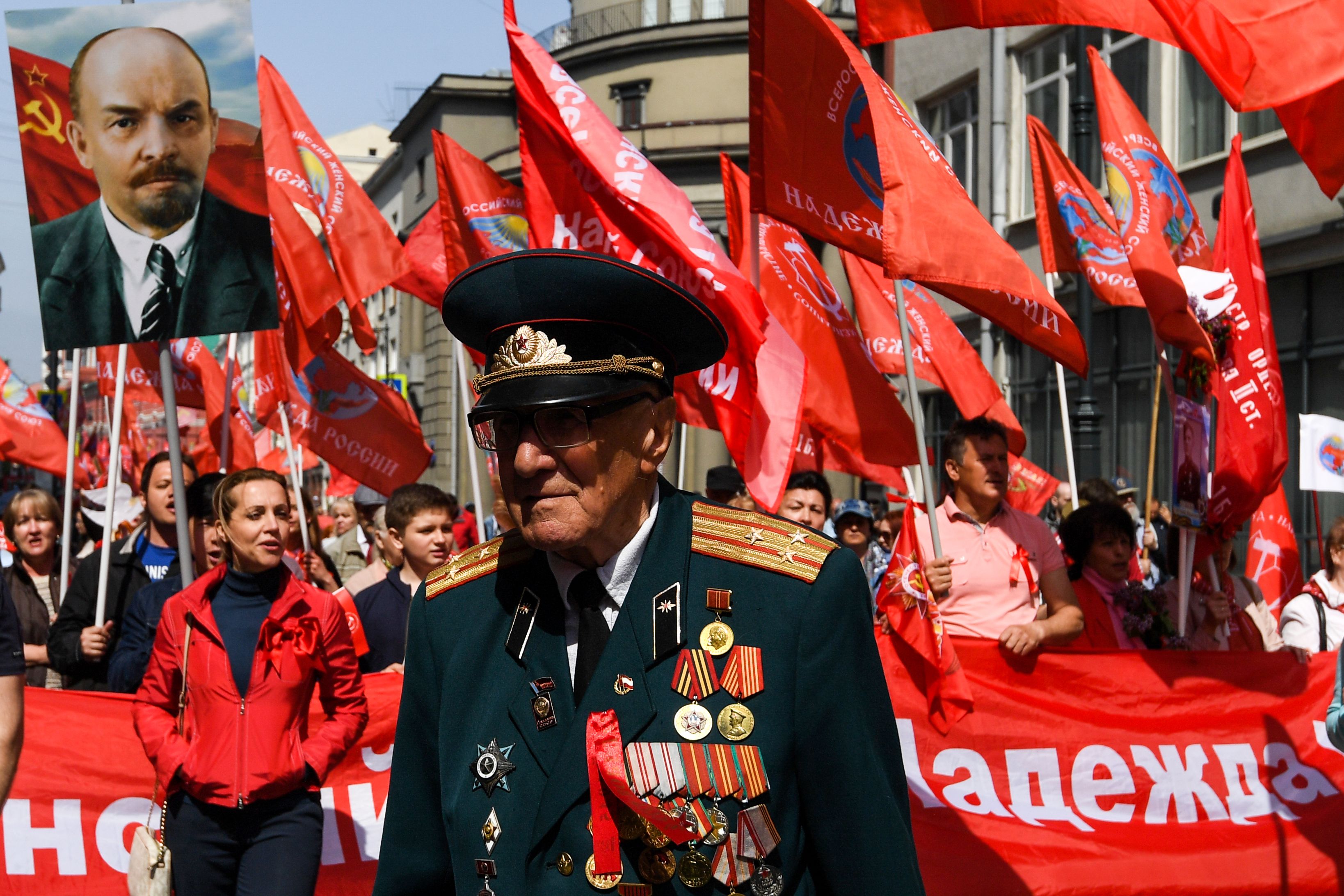 Even Stalin’s reputation has experienced an unprecedented rehabilitation over the past few years. A different survey from the same Russian pollster revealed that Stalin’s popularity among Russians had reached a record high, with 70% of recipients stating that the Stalin played an “entirely positive” or “rather positive” role in history. Only 54% of Russians expressed a favorable of view of the Soviet strongman just three years ago. (RELATED: 70% Of Russians Approve Of Mass Murderer Joseph Stalin’s Impact On Country: Poll)

Ekaterina Sokiryanskaya, Director at Conflict Analysis and Prevention Center, explained that many Russians remember Stalin as a strong leader who kept elites in check.

“Stalin represents state and order for some Russians. Putin is liked for same reasons, but some long for a leader who would bring more order and less corruption,” she said.

Russians’ drift toward socialist and communist politics has not been limited to Soviet nostalgia. While the Russian Communist Party has for much of Putin’s presidency largely operated within the political confines set by the Kremlin, it has emerged in recent years as a prominent organizer of anti-government protests and a spoiler for Putin allies at the ballot box. (RELATED: Putin’s Popularity And Economy Reportedly Deteriorate As Russian Protests Continue)

The Communist Party spearheaded the charge against the government’s pension reform plan in the summer of 2018, organizing mass demonstrations all across Russia in opposition to the new policy.

When protests broke out this summer over the Moscow Election Commission disqualifying numerous opposition candidates from participating in the city council election, Communists rallied to condemn the decision – while also accusing the liberals of acting under foreign influence.

Anger over pension reforms and election fairness have handed the Communist Party some notable wins in the past two Russian regional elections. In September 2018, Communists ousted the ruling United Russia party from a governorship and two regional assemblies. They almost took a second governorship in one of Russia’s far eastern regions, but after several controversial reruns of the election, the Kremlin-backed candidate emerged victorious. 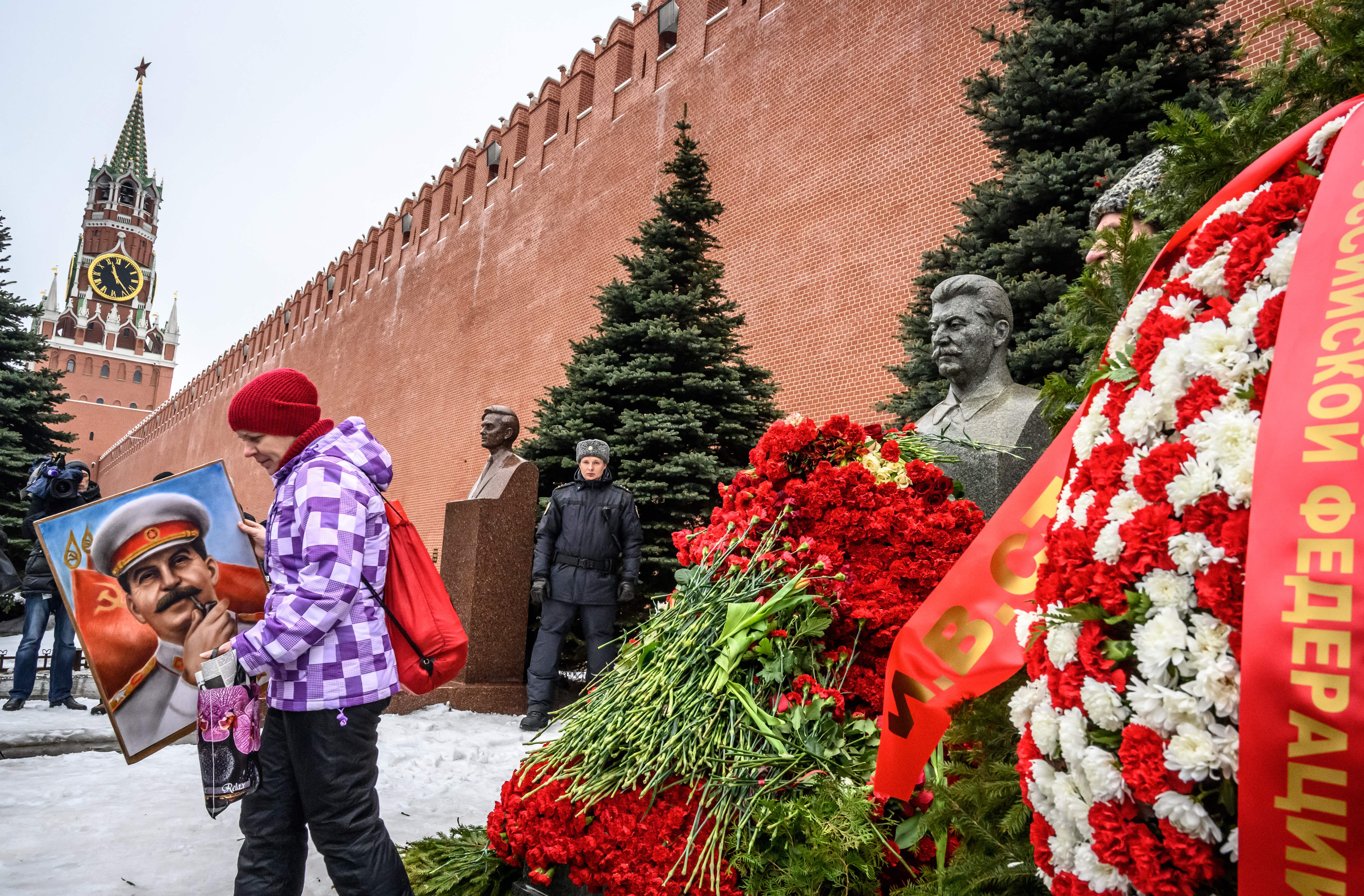 A woman holds a portrait of Soviet leader Joseph Stalin and pays her respect at his grave outside the Kremlin on the Red Square in Moscow on March 5, 2019 as members of different Communist and Left movements gather to mark the 66th anniversary of Stalin’s death. (Photo by Mladen ANTONOV / AFP) (Photo credit should read MLADEN ANTONOV/AFP/Getty Images)

In a move that surprised many, prominent Russian liberal activist Alexei Navalny actively worked to help many of the Communist candidates in the Moscow City Council elections get elected. As part of his “Smart Vote” initiative, Navalny urged his supporters to set their own preferences aside and vote for the most electable opposition candidates in each district – many of whom were Communists. (RELATED: Report: Trump Told Russian Officials He Wasn’t Concerned About Election Interference)

Although united in their effort to challenge the Kremlin, liberals and communists in Russia have a tenuous partnership. Divided by stark differences in ideology, they also are competitors for leadership of the opposition movement.

In the West, Navalny is widely regarded as the face of the Russian opposition. But leftists are unlikely to fall in line behind the liberal crusader, Sokiryanskaya stated.

“Navalny wants to define the conditions for cooperation and leftists are very principled people, so they don’t like that,” she said.

While the social media-savvy Navalny has a strong following among young Russians, leftists are making a strong play for this demographic as well.

Anastasia Labunets, a 22-year-old communist activist from Crimea, told The Daily Caller that Marxist ideas strongly resonated with well-educated Russians of her generation.

“People of professions that are usually considered intellectuals: professors, writers, philosophers, artists, scientists, etc. — most often they criticize capitalism to one extent or another and hold Marxist views,” Labunets said.

Although a second coming of the Bolshevik revolution is far off, the rising popularity of communist and socialist ideas does have important implications for the United States. While many in Washington hope that the Russian opposition would pursue a more pro-Western foreign policy if given power, Sokiryanskaya explained that broad segments of the Russian left can be categorized as the “Patriotic Left” – which she describes as “nationalism under a red flag.” (RELATED: At Presidential Rally For A Man Who Honeymooned In Soviet Russia, Supporters Chant ‘Moscow Mitch’)

These “Left Patriots” hold hawkish views on the conflict in Ukraine and want Russia to play a major role on the world stage, Sokiryanskaya said. While others on the Russian left support a more restrained foreign policy, they are not yet in the majority.