Less than 12 hours after President Donald Trump tweeted out an edited music video, it was removed by Twitter “in response to a report from a copyright holder.”

Trump posted an edited version of a Nickelback music video Wednesday afternoon, aimed at showcasing former Vice President Joe Biden and his son’s apparent connection to a Ukrainian natural gas company. Within 12 hours, the president’s video was removed by Twitter due to a copyright claim submitted by the Warner Music Group, the label that manages Nickelback.

LOOK AT THIS PHOTOGRAPH! pic.twitter.com/QQYTqG4KTt

Trump’s edited video was based on the rock band Nickelback’s music video for their song “Photograph.” The lyrics for the song implore the listener to “look at this photograph” as the original video shows the band’s lead singer presenting a picture of himself and some friends.

In Trump’s video, the group of friends was replaced by a 2014 photograph of Biden and his son with Devon Archer, an executive of a Ukrainian gas company at the time. (RELATED: 2014 Photo Shows Joe And Hunter Biden Golfing With Ukraine Gas Co. Exec.) 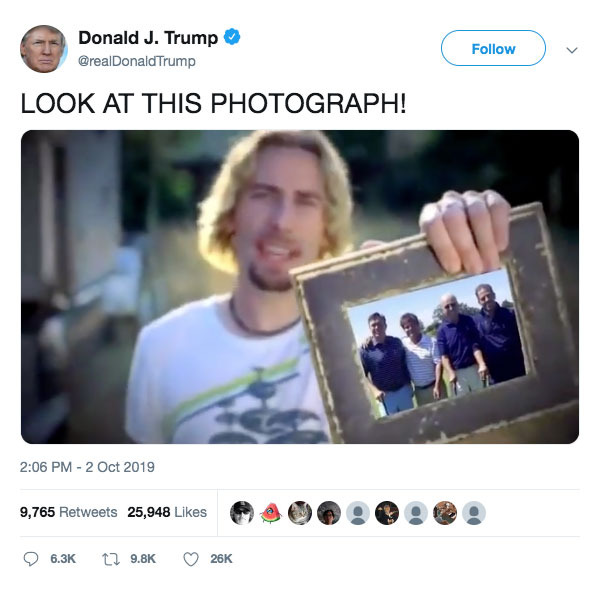 Ukraine is at the center of Speaker of the House Nancy Pelosi’s presidential impeachment inquiry, which was launched last week. According to Pelosi and her allies, Trump attempted to pressure Ukraine into investigating former Vice President Joe Biden’s potentially corrupt relationship with the country.

Biden has previously denied any involvement with Ukraine and distanced himself from his son’s Ukrainian business interests.

“I have never spoken to my son about his overseas business dealings,” Biden claimed earlier this month, according to The Hill. However, some doubt this claim, including Trump.

“He made a lie when he said he never spoke to his son. I mean, give me a break,” Trump told reporters earlier this month, according to the White House.

Is there anything more pathetic than violating copyright law with a pinned Nickelback tweet pic.twitter.com/ip5jksa0aO