A Bloomberg Law article going after a government aide in September by characterizing old Facebook posts as anti-Semitic was retracted Friday after emails surfaced indicating the reporter mischaracterized the employee’s comments.

The outlet came under fire in September when reporter Ben Penn wrote about the Department of Labor’s newest political appointee, 43-year-old Leif Olson. Penn brought up 2016 posts on Olson’s Facebook page and said a remark “references two anti-Semitic tropes,” in an Aug. 30 inquiry to DOL, according to the email inquiry obtained by lawyer Ted Frank.

The article was retracted at 4:35 p.m. Friday, at a time when readership on news websites are typically low. It did not mention whether there would be any repercussions for Penn, the reporter responsible for the article.

“Bloomberg Law has retracted this article, published on Sept. 3,” Bloomberg Law wrote in place of the original article Friday. “In reporting on a series of social media posts from Department of Labor official Leif Olson, we failed to meet our editorial standards for fairness and accuracy. We regret that lapse and apologize to our readers and to Mr. Olson.”

???? ???? ????@blaw refused to answer my questions about their abusive journalism fail on the Leif Olson story, so we FOIA’ed Penn’s emails to DOL to see how it happened. As you can see, this was a total hit job, @benjaminPenn truncated & mischaracterized the Facebook posts. pic.twitter.com/CzTsMKWUBN

Penn’s article “was a total hit job,” Frank wrote after receiving the email sent to DOL. Penn’s email included screenshots of the Facebook comments, but the reporter appears to have cropped out a portion of the full thread that showed a comment labeling the note as sarcasm. The email also included nine questions about Olson’s “personal social media posts,” according to a screenshot of the email from Frank’s tweet. 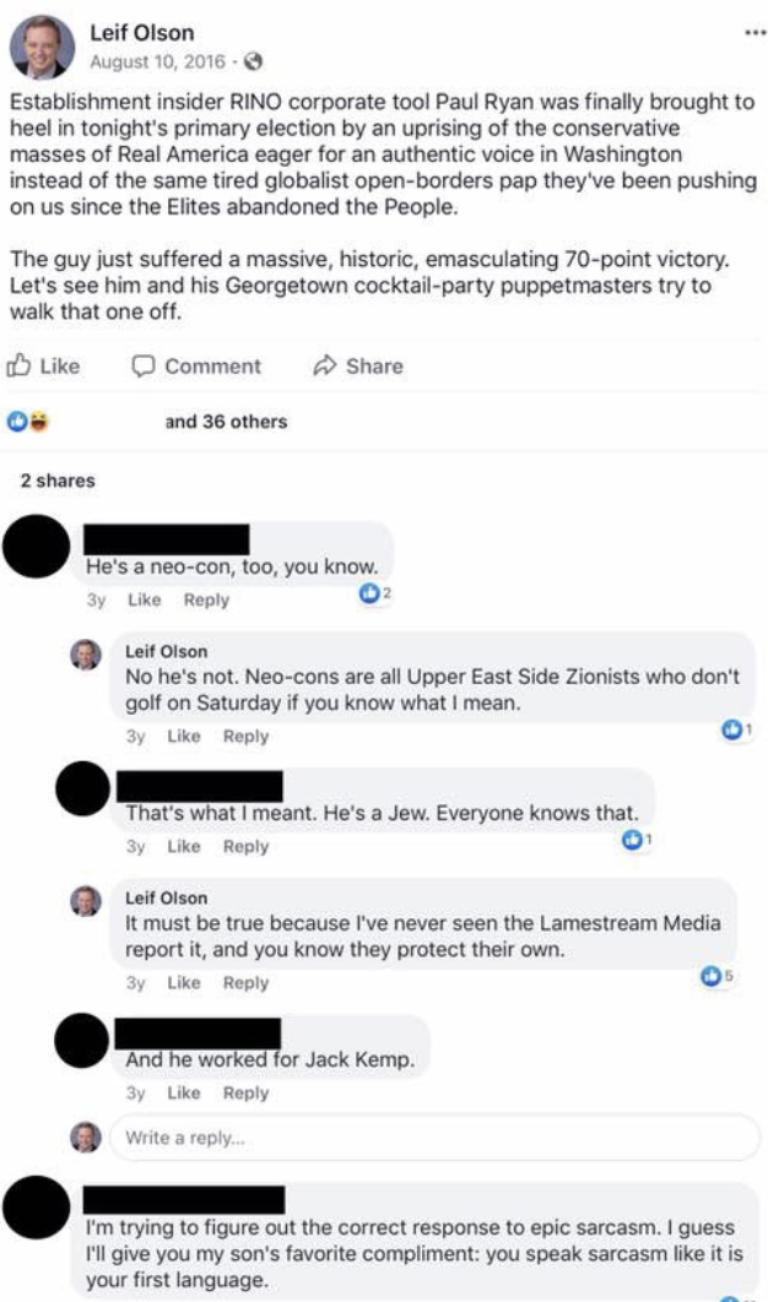 Bloomberg Law cropped out the portion of the thread that asserted Olson’s comments were a joke. (Screenshot Facebook)

The remark “was sarcastic criticism of the alt-right’s conspiracy theories and anti-Semitic positions,” Olson said in an interview, according to Bloomberg Law. (RELATED: EXCLUSIVE: Labor Department To Reinstate Aide Wrongfully Accused Of Anti-Semitism)

Olson tendered his resignation in August following the report, but was ultimately reinstated in September after DOL examined the situation.

“On Friday, August 30, 2019, senior policy advisor of the Wage and Hour Division Leif Olson offered his resignation and the department accepted,” the department said in a previous statement to the DCNF. “Following a thorough reexamination of the available information and upon reflection, the department has concluded that Olson has satisfactorily explained the tone and content of his sarcastic social media post and will return to his position.”

Bloomberg Law did not immediately reply to a request for comment.