For 23 days last month, the Nigerian government detained an ill, elderly woman in an underground jail for dubious reasons, and without due process or access to proper medical care, according to both American watchdogs and Nigerian activists. Worse, because of her Christian faith and her public service under a previous government, her legal ordeal may just be beginning.

Grace Taiga is a retired civil servant who was apparently thrown into detention for failing to support Nigerian President Muhammadu Buhari’s scheme to evade a British court decision that requires the Nigerian government pay $9.6 billion for breaking a contract. 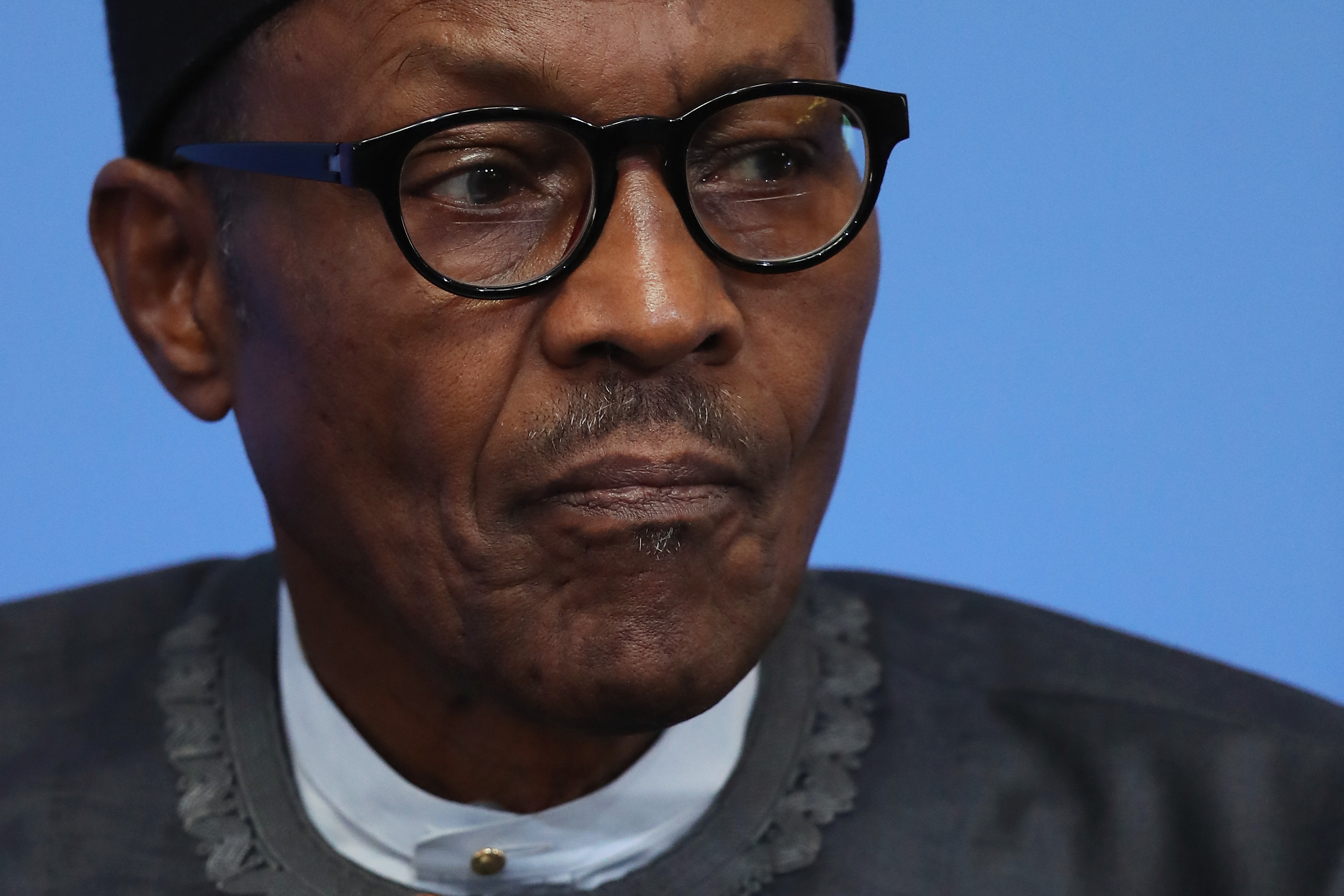 LONDON, ENGLAND – MAY 12: Nigerian President Muhammadu Buhari listens as British Prime Minister Cameron opens the international anti-corruption summit on May 12, 2016 in London, England. Leaders from many of the worlds nations are gathering in London for the summit, which is aimed at stepping up action to tackle the problem of corruption. (Photo by Dan Kitwood -WPA Pool/Getty Images)

In 2010, the Nigerian government and engineering company Process and Industrial Developments Limited (P&ID) entered into a 20-year agreement whereby P&ID would build and operate a natural gas plant, and the government would install pipelines and related infrastructure. The Nigerian government, however, never made good on its commitments to the contract.

As a result, following arbitration in the UK, a London court awarded P&ID a $6.9 billion judgement in 2014. The award has grown by $1.2 million per day since the judgment, due to accruing interest and now totals almost $9.6 billion.

In an attempt to build a justification to fight the judgement, the Nigerian government has responded by convicting P&ID of various offenses such as fraud and tax evasion in what has been called a “sham trial” by both P&ID attorneys and outside observers. As part of the efforts to delegitimize the contract in question, Nigerian Government agencies have also launched a series of targeted arrests and arbitrary detentions of bureaucrats who worked for the government at the time the contract was initially signed.

One of the former officials who worked for the government at the time was Taiga, who served as a Deputy Legal Director in Nigeria’s Petroleum Ministry and was present when the P&ID contract was signed. 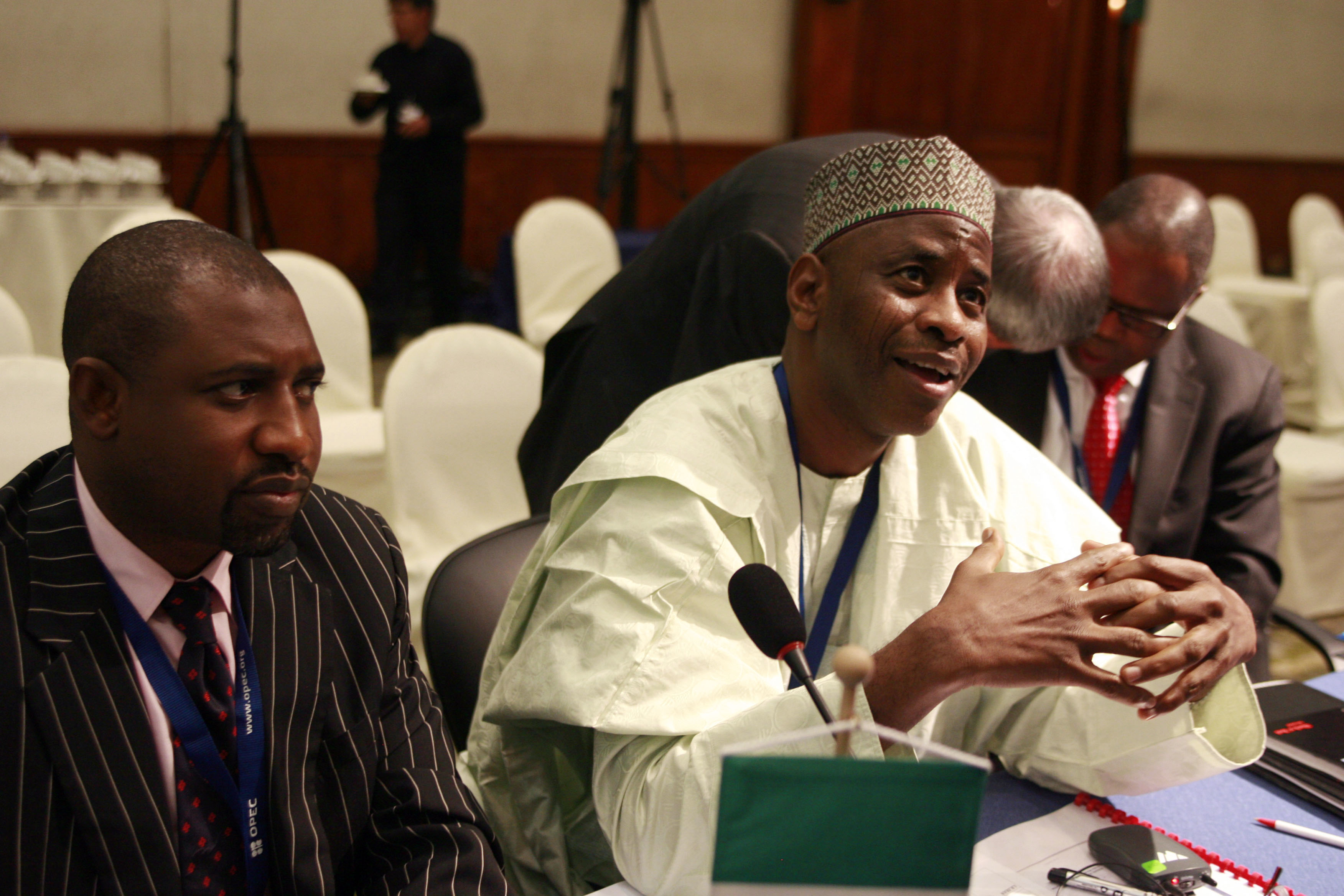 Nigeria’s Permanent Secretary of the Ministry of Petroleum Goni M. Sheikh (R) is joined by a delegate during an interview at the 158th Extraordinary Meeting of the OPEC Conference in Quito December 11, 2010. REUTERS/Gary Granja (ECUADOR – Tags: BUSINESS ENERGY POLITICS) – GM1E6CC08D501

Taiga was detained by Nigeria’s Economic and Financial Crimes Commission (EFCC) on September 3, but was not charged with a crime until September 20. This violated the Nigerian constitution, which requires a citizen be freed within 48 hours if charges aren’t filed by a court. Taiga’s treatment also violates a number of international human rights laws, including as some observers point out, the U.S. Global Magnitsky Act, which allows the American government to sanction individuals considered to be human rights offenders. (RELATED: Nigerian Child Brides As Young As 10 Years Old Sold To Old Men Via Facebook)

The EFCC did not respond to multiple requests for comment.

Terry Schilling, the executive director of the American Principles Project and a Daily Caller contributor, believes Taiga was “held in an attempt to intimidate her into supporting Buhari’s efforts to evade the court judgment.”

“This intimidatory tactic of unlawful detention is designed to coerce Grace into retracting her genuine eyewitness account, and instead to toe the false Buhari line,” Schilling says.

“In my opinion, Grace is a scapegoat for the government,” says Lanre-Peter Elufisan, a journalist who co-founded the Ominira Initiative for Economic Advancement, a public policy think tank based in Nigeria. Elufisan believes the government may be imprisoning Taiga and others to cover up for errors related to the contract, and during the court hearing, made by the current administration.

Taiga’s troubling imprisonment was made worse by the government’s disregard for her numerous serious health issues.

She lives with just one malfunctioning kidney, which causes a lack of mobility, and requires dialysis and a battery of daily medications. Taiga also battles diabetes and severe high blood pressure.

On September 4, the EFCC promised to “take urgent steps to attend to [Taiga’s] health challenges and do all that was necessary to manage her health,” according to Charles Abalaka, an attorney fighting for Taiga to receive proper medical care.

The EFCC broke that promise.

Rather than receiving regular medical care, Taiga was forced to sleep on a bare floor and in a plastic chair. Sores began to develop on her legs and feet and she was refused medicines other than basic pain relievers. For weeks, Taiga’s kidney disease, diabetes and blood pressure issues went untreated.

Female guards were not made available to help Taiga get to the bathroom. As a result, she was forced to use the restroom in front of male guards, a humiliating circumstance for a modest 70-year-old woman.

Finally, on September 25, Taiga was allowed a bail hearing. At the hearing, the judge determined the government “failed woefully in providing reasons why [Taiga] should not be granted bail.”

Even though the bail hearing went decisively in Taiga’s favor, the damage was done.

The Nigerian Government leveled an 8-count indictment against her, including claims she accepted bribes from P&ID when in fact, according to the government’s own investigators, the gift was to cover medical bills, almost a decade after the contract was signed.

Taiga is headed for trial on October 15. In the meantime, Taiga remains in a hospital in Abuja and without a passport. In addition to serving as a bureaucrat in a previous administration, Taiga has another strike against her in the eyes of the current government: She is a Christian.

Since the election of Buhari, a devout Fulani Muslim, in 2015, Christians have been persecuted in parts of Nigeria. At least 6,000 Christians were killed by Fulani Muslims in central Nigeria last year, according to the Christian Association of Nigeria. In recent months, women and girls have been raped, children have been tortured, and Christians of all ages have been systematically slaughtered. (RELATED: Islamic Terrorists Ramp Up Attacks On Nigerian Christians) 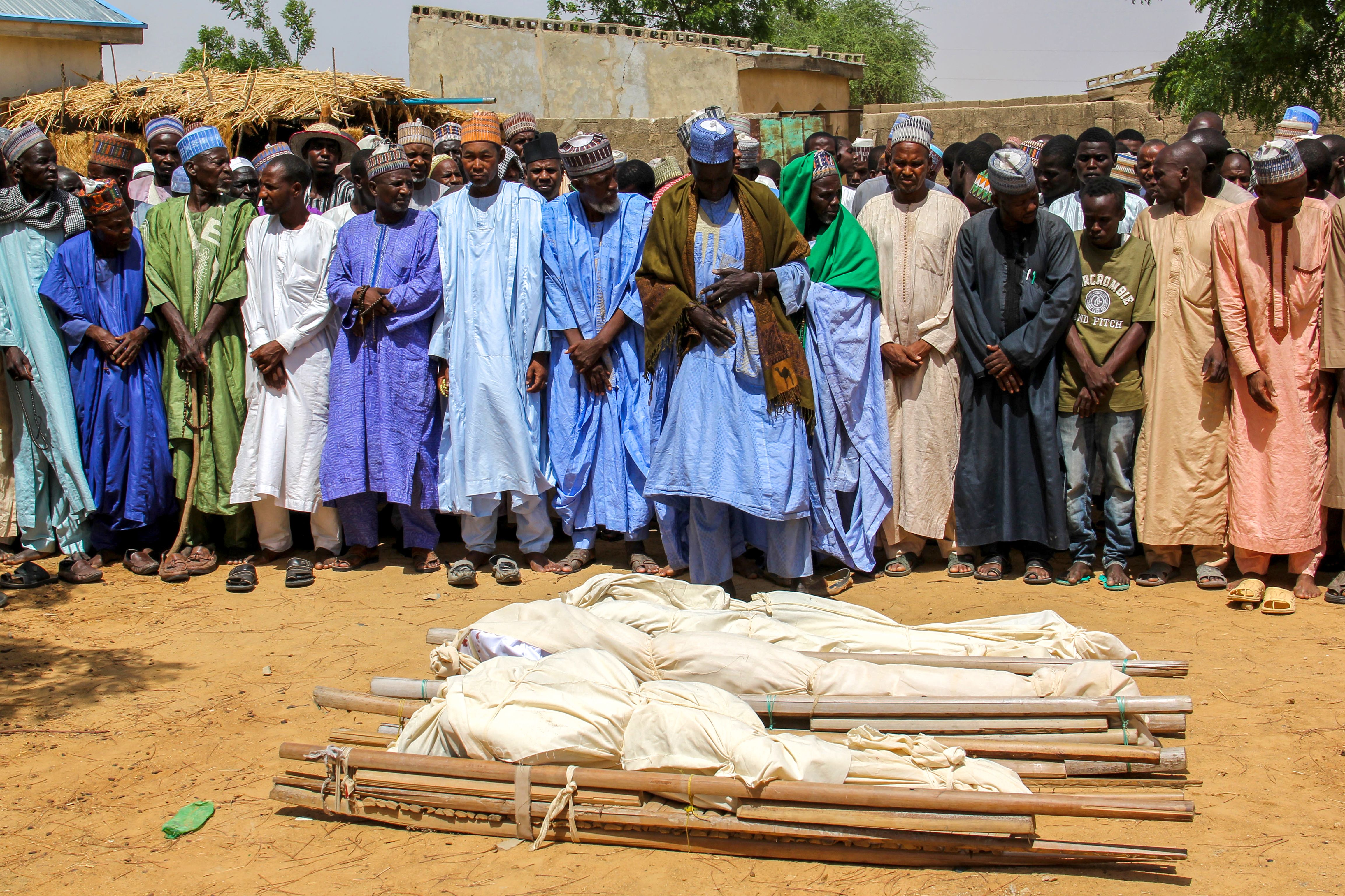 TOPSHOT – Men pray next to coffins during a burial ceremony, after two people were killed by Boko Haram fighters in Dalori camp for internally displaced people, near Maiduguri, on July 26, 2019. – Two people were killed and several wounded when Boko Haram fighters raided a camp for people displaced by the jihadist conflict in northeast Nigeria, emergency services said on July 26, 2019. Dozens of Islamist militants on motorcycles and two motorised rickshaws stormed into Dalori camp on Thursday, shooting people and looting food supplies after overrunning a nearby military base. (Photo by Audu MARTE / AFP) (Photo credit should read AUDU MARTE/AFP/Getty Images)

All the while President Buhari, who relied on the large voting bloc of fellow Fulanis – as well as alleged vote tampering – to win the 2019 election, has ignored the atrocities.

A State Department spokesperson acknowledges “violence playing out along religious and ethnic lines,” but stops short of saying the U.S. would get involved. “The vast majority of Fulani, including President Buhari, are peaceful people who abhor violence and terrorism,” the spokesperson claims.

According to Schilling, however, the Trump administration needs to take a tougher stance. “It would be morally indefensible for the United States to continue to do business with the Buhari government,” while they murder Christians and imprison people like Grace Taiga, says Schilling. (RELATED: SCHILLING: Nigerian Christians Are Being Persecuted — The US Should Help)

Schilling spearheaded a letter to the Trump administration signed by a number of American think tanks and Christian organizations urging the U.S. to take steps against human and religious rights violations perpetrated by Nigerian government officials. 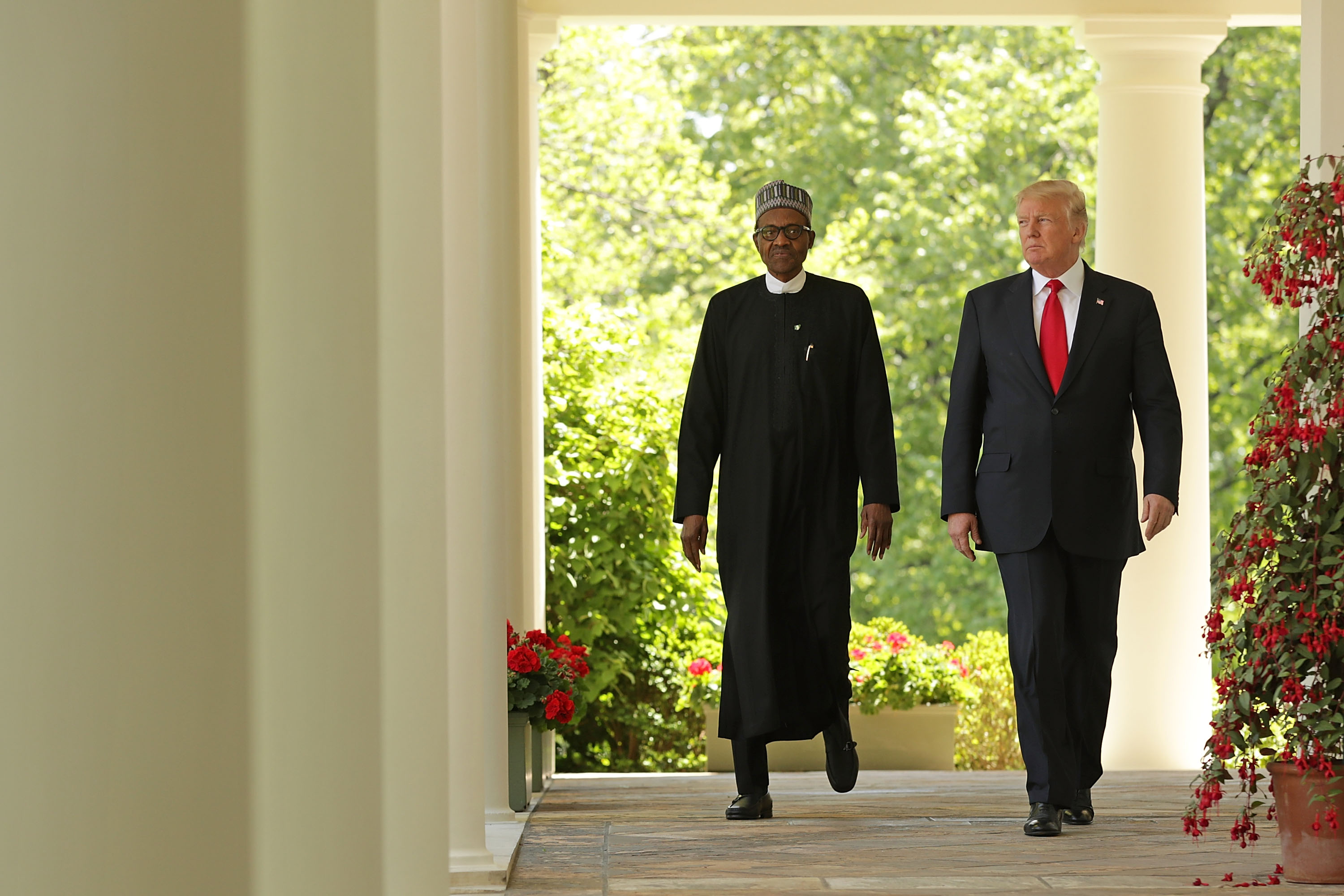 WASHINGTON, DC – APRIL 30: U.S. President Donald Trump (R) and Nigerian President Muhammadu Buhari walk into the Rose Garden for a joint press conference at the White House April 30, 2018 in Washington, DC. The two leaders also met in the Oval Office to discuss a range of bilateral issues earlier in the day. (Photo by Chip Somodevilla/Getty Images)

Nigerians willing to speak about the situation seem to agree that, while Taiga may have not been arrested specifically because of her faith, she would not have been detained if she were Muslim.

“It is definitely possible that if Grace were a Fulani Muslim and friend of the current political elite, she wouldn’t have been put in prison,” Elufisan acknowledged.

“The president is popularly believed to be partial to his [Fulani] kinsmen.”

Nigeria’s government appears unwilling to embrace human rights and the rule of law. Schilling believes action by the American government may be the best hope for stopping the murder of Christians by supporters of President Buhari, and protecting Taiga and others who could be used as a pawn in Nigeria’s shady attempt to avoid paying the compensation as ordered by the British court.

“The U.S. government has a right and a responsibility to sanction any individual involved in the violation of human and religious rights in Nigeria and beyond,” Schilling says.