President Donald Trump implicitly addressed the institution of slavery in the United States during an event with young black supporters on Friday, asserting that black Americans did more to build the nation than they are given credit for.

The president spoke to approximately 300 of his supporters in the East Room of the White House during the Young Black Leadership Summit, an event hosted by Turning Point USA, a conservative nonprofit.

“You know, you’re just starting to get real credit for that, okay? I don’t know if you know that. You’re just starting to get — you built the nation. We all built it. But you were such a massive part of it — bigger than you were given credit for,” Trump stated. “But through generations of blood, sweat, and tears and — you deserve a government that defends your interests, protects your families, and cares for our own citizens first.” 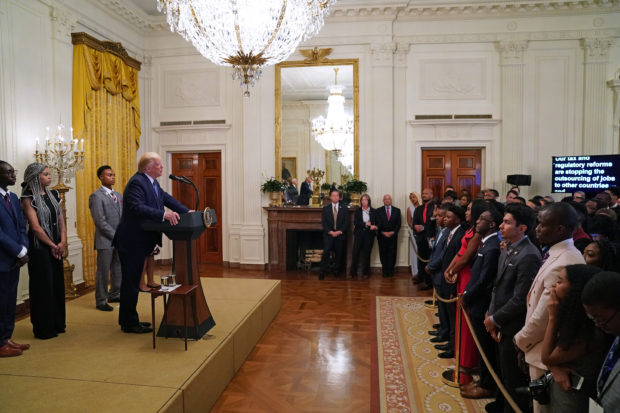 The young Trump supporters were revved up to see the president on Friday, and Trump joked that he had never heard such uproarious cheers for any other event in the East Room.

“So, I’ve been doing this for a long time. That is the loudest I’ve ever heard anything in this room,” he said. “You just broke the record.”

Trump also brought up a statement he made during his 2016 presidential campaign, when he urged black people to leave the Democratic Party because they had not done enough for black Americans. (RELATED: American Minorities Make Historic Employment Gains In Trump Era, Analysis Shows)

The president also asked his supporters in the room to vote for him again in 2020, insisting that the “Do Nothing Democrats” still hadn’t done anything to earn the black vote.