For the first time in years, Democrats outnumber Republicans in every one of San Diego’s council districts, but Republican City Council Candidate Joe Leventhal is working to change that.

Leventhal has centered his candidacy for the 5th District of San Diego on solving the homelessness crisis, addressing the city’s decaying roads and infrastructure and meeting the needs of police officers. Leventhal joined the race for the city council seat for the 5th District in September after the Republican who’d previously announced a run suffered from low fundraising. Fundraising is an issue Leventhal hasn’t shared, raising over $100,000 in 22 days, a record for a San Diego city council campaign, he told the Daily Caller. (RELATED: Some Californians Are Paying $5 For A Gallon Of Gas)

“We’re making some progress, but we’ve been challenged by a super majority of city council Democrats,” Leventhal said. “People have said we have the roads of a third world country. People are being overcharged for their water. This is all the failure of our elected leaders to provide basic governmental services.”

Leventhal is a local attorney who served as San Diego’s Ethics Commissioner until September 2018, a position that prevented him from fundraising and formally announcing his campaign until September 2019. He argues that homelessness is a statewide problem created by recent legislation passed in the state that limits law enforcement’s ability to get homeless people off the streets, and exacerbated by a city government that is ill-equipped and unwilling to address the problem. 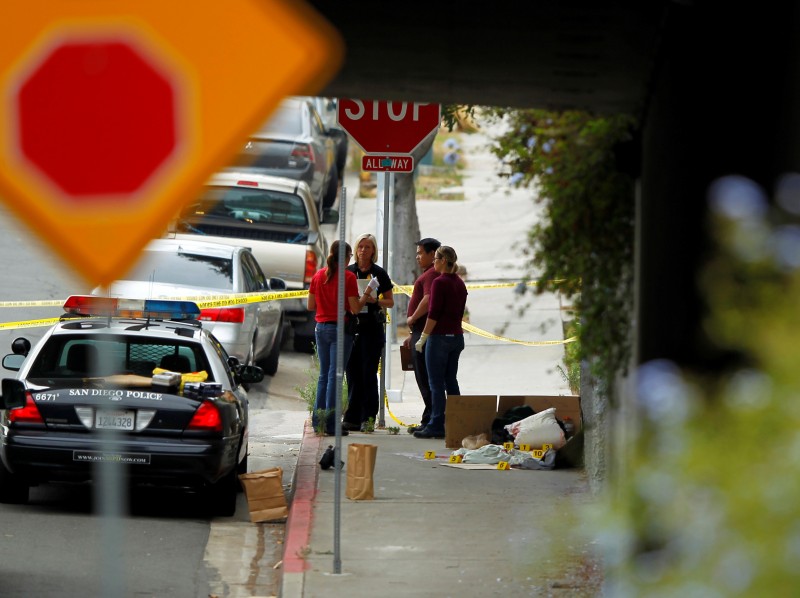 Police investigate the scene under a highway overpass where another apparent attack by a serial killer targeting homeless men took place overnight in San Diego, California.

“I talk to Republicans; I talk to independents; I talk to Democrats, and they are full of the same mindset that people need to be focused on making our government more effective,” Leventhal told the DC. “We have this housing first policy where we get people permanent housing before dealing with any mental health or drug issues issues, but we do that and then their underlying cause of homelessness isn’t addressed.”

I’m very excited about this endorsement! Father Joe is an icon in San Diego and has dedicated his life to reducing homelessness in our region.https://t.co/fuMfBlhX6T pic.twitter.com/bgrm4IkKGT

San Diego, which has the 4th-highest homeless population of any city in the country, also doesn’t collect data on key aspects of its homeless population, meaning the officials who make decisions on how to address the problem don’t know where the city’s homeless population is coming from, where they are staying in the city, or whether they were homeless before coming to San Diego, Leventhal said. They also can’t measure the most effective ways of getting homeless people off the streets and back on their feet.

“Our housing first policy has increased the size of the carrot, if you will, to be homeless, and props 47 and 57 have taken away the stick,” Leventhal said. “But this is an opportunity for people like me who can effectively push for fiscal-reform minded policies that will deliver the services people should expect.”