There were six Canadian party leaders on the stage Monday night for a federal election debate, but most eyes were on Canadian Prime Minister Justin Trudeau and his closest challenger, Conservative leader Andrew Scheer.

Sheer wasted no time in attacking Trudeau for the scandals that continue to dog him through a federal election campaign that began on Sept. 11 and ends when Canadians go to the polls on Oct. 21.

The Conservative leader insisted Trudeau is a “phony” and a “fraud” who preaches diversity, yet has a history of wearing blackface. Trudeau was asked by one reporter if he had “reached out to any African leaders” and apologized for his “personal conduct,” Trudeau responded that “Canada will continue to engage in a positive and constructive manner around the world, standing up for human rights, engaging with leaders right around the world.”

When told that he had not answered the question, Trudeau said that he preferred to “connect with Canadians on climate change.”

Scheer also faulted Trudeau being hypocritical on reconciliation with Canada’s First Nations, and for his role in the SNC-Lavalin scandal that continues to haunt Trudeau with the Royal Canadian Mounted Police saying the Trudeau government is blocking its inquiry into the matter.

A higher-quality video of Canadian Prime Minister Justin Trudeau in blackface has emerged, Sept. 28, 2019. The Post Millennial screenshot via Twitter.

Scheer completely ignored the first question from the audience and went after Trudeau, repeating the Conservative Party’s election slogan that “Trudeau can’t be trusted.” (RELATED: Canadian Conservative Leader Andrew Scheer And Possible Next Prime Minister Is A US Citizen)

He made no reference to questions being raised by some Canadian news outlets about the events surrounding Trudeau’s departure from the West Point Grey Academy in Vancouver, where Trudeau taught drama.

Trudeau has refused to comment on whether he left the school of his own volition or was asked to leave.

The Ottawa bureau chief for Global News, Mercedes Stephenson, wondered why the Conservatives had suggested that Scheer might raise the matter during the debate, but he “never asks him. So why the press release?”

So after their press release demanding answers about Trudeau’s reasons for departing Point Grey, noting he would have a chance to answer tonight, Conservative leader Andrew Scheer never asks him. So why the press release? #cdnpoli #elxn43

Scheer was nonetheless on the offensive.

“He’s very good at pretending things. He can’t even remember how many times he put blackface on because the fact of the matter is he’s always wearing a mask. He puts on a reconciliation mask and then fires the attorney general, the first one of Indigenous background. He puts on a feminist mask and then fires two strong female employees for not going along with his corruption,” Scheer said.

Scheer faced more vociferous opposition from the former foreign affairs minister in Harper’s cabinet who bolted the Conservative Party last year to form the libertarian People’s Party of Canada. Maxime Bernier accused Scheer of being a hostage to Canada’s dairy industry and weak on immigration.

The Conservative leader denied the accusation and said he supports said the opposite, a “fair, orderly and compassionate” immigration system. 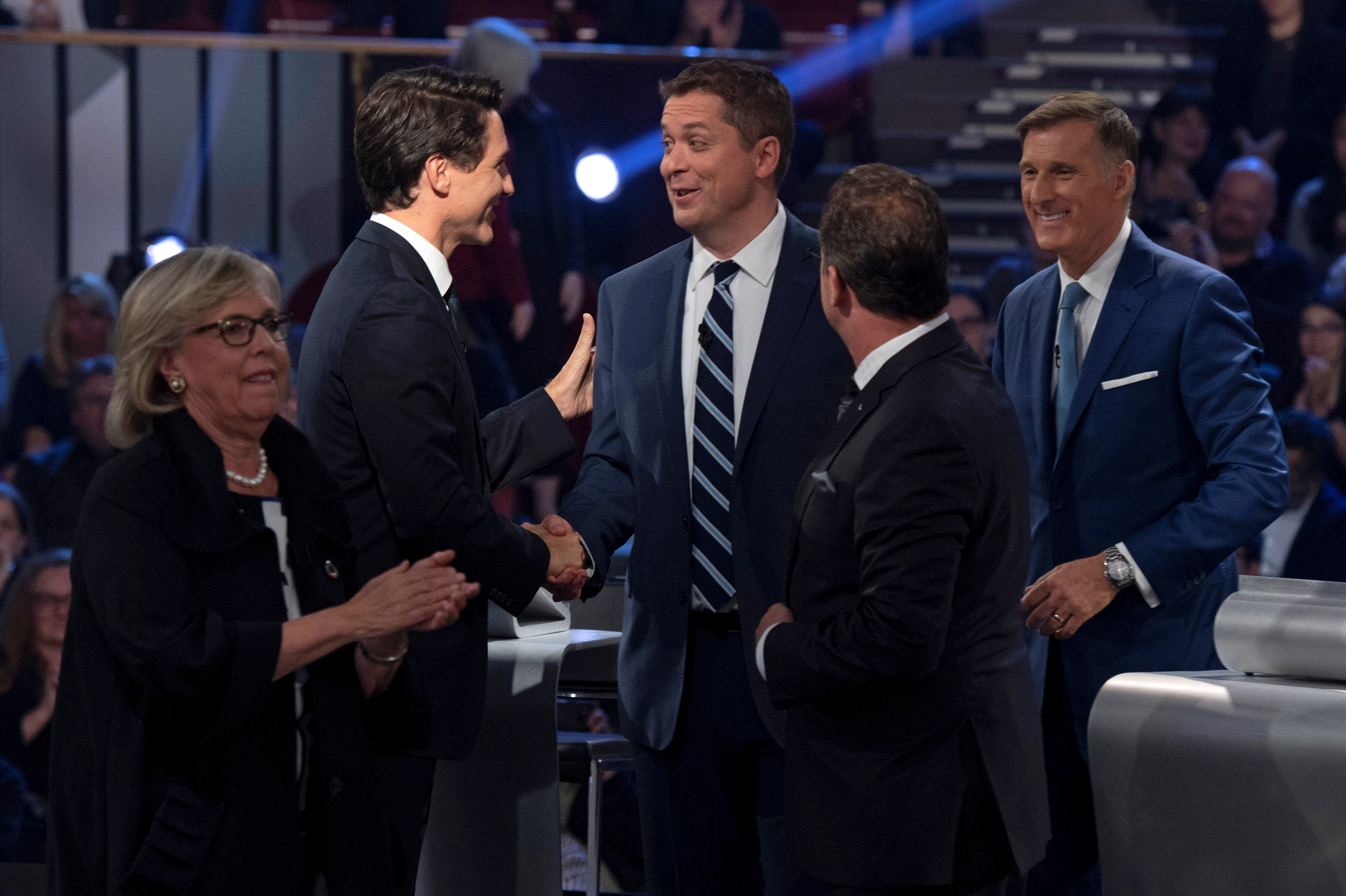 Trudeau had one of his best moments of the night when he said to Bernier, “Your role on this stage seems to be to say publicly what Mr. Scheer thinks privately.”

“That is the difference between Mr. Bernier and myself on this issue. We believe in making Canada stronger by welcoming people, adding to our country and celebrating the things that have made us great as a nation,” Scheer said.