The Democrats’ 2020 presidential frontrunner Joe Biden has had an extremely long political career, he was elected to represent Delaware in the Senate in 1973 and managed to remain firmly entrenched there until 2009, when he became the vice president to Barack Obama.

These years of public service have given Biden a visible and mixed record on the subject of free-trade deals, voting against some, but supporting and voting for several other controversial free-trade agreements. Much of his support, especially in the rust belt, comes from blue-collar and union workers who view him favorably, but Biden’s record on trade could present an opening to his rivals in the Democratic primary field, as well as in a potential presidential match-up against President Donald Trump.

Biden has voted against multiple free-trade agreements (FTAs), such as the Singapore FTA and the Chile FTA, among others. However, he advocated for the Trans-Pacific Partnership (TPP) during his time as vice president and supported the North American Free Trade Agreement (NAFTA), a trade deal that some have argued has contributed to the hollowing out of  America’s heartland and manufacturing capabilities.

Now that it’s been several decades since NAFTA was passed, we can evaluate the results. They were worse than expected. In fact, nearly a million manufacturing jobs were outsourced to Mexico and elsewhere as companies took advantage of the fact that foreign workers would work for pennies on the dollar. Michigan, a state that is often seen as one Biden is well-positioned to win, was among the hardest hit by this mass exodus. Supporters of the TPP made many of the same promises to American workers that they used in regards to NAFTA, saying that decreased tariffs would lead to an increase in American jobs. 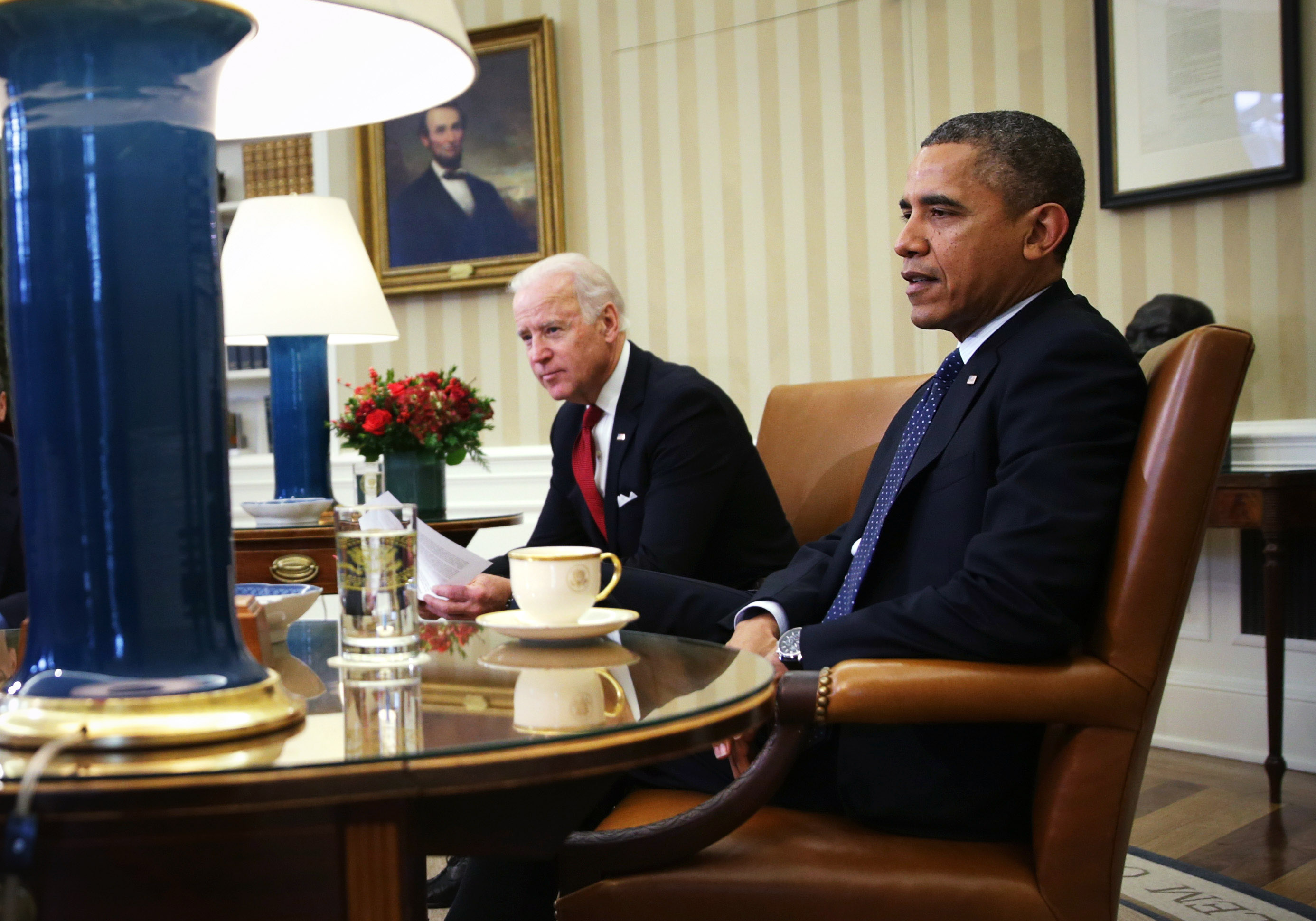 NAFTA and the TPP are two of the more controversial trade deals the U.S. has been involved with. NAFTA is an agreement between the U.S., Mexico, and Canada, and is designed to encourage free trade between the three countries. It is also the largest free trade agreement in the world. The TPP was supposed to be part of the Obama administration’s “strategic pivot” to the Asia-Pacific region and would have included countries such as Australia, New Zealand, Peru and more. The TPP would have surpassed NAFTA as the largest free trade agreement if the U.S. had remained in it and if it had been ratified by the U.S Congress, according to cfr.org. (RELATED: The Pacific Pivot: How Obama’s Massive Foreign Policy Shift Ended Up In Tatters)

The effectiveness of NAFTA and the TPP has been questioned this past election cycle and both trade-agreements have been very heavily criticized. President Donald Trump has called NAFTA the “worst trade deal ever made,” and withdrew the U.S. from the TPP.

We are in the NAFTA (worst trade deal ever made) renegotiation process with Mexico & Canada.Both being very difficult,may have to terminate?

Biden was one of the 61 senators to vote for the ratification of NAFTA in 1994 and as vice president under former President Barack Obama, Biden was a vocal advocate for the TPP and remained so as late as 2016, saying, “Sometimes when there’s no election to face and people are leaving and others who are staying, they may see the wisdom of TPP,” according to Reuters. He also stands by his vote for NAFTA, saying, “Fair trade is important … Not free trade. Fair trade. And I think that back in the time during the Clinton administration, it made sense at the moment.”

However, Biden has since distanced himself from his support for the TPP, and has said that the agreement would have to be renegotiated.

“I would not rejoin the TPP as it was initially put forward,” Biden said. “I would insist that we renegotiate … Either China’s going to write the rules of the road for the 21st century on trade or we are. We have to join with the 40 percent of the world that we had with us and this time make sure that there’s no one sitting at that table doing the deal unless environmentalists are there and labor is there.” (RELATED: Trump Signs Executive Order Killing Obama’s Legacy Trade Deal) 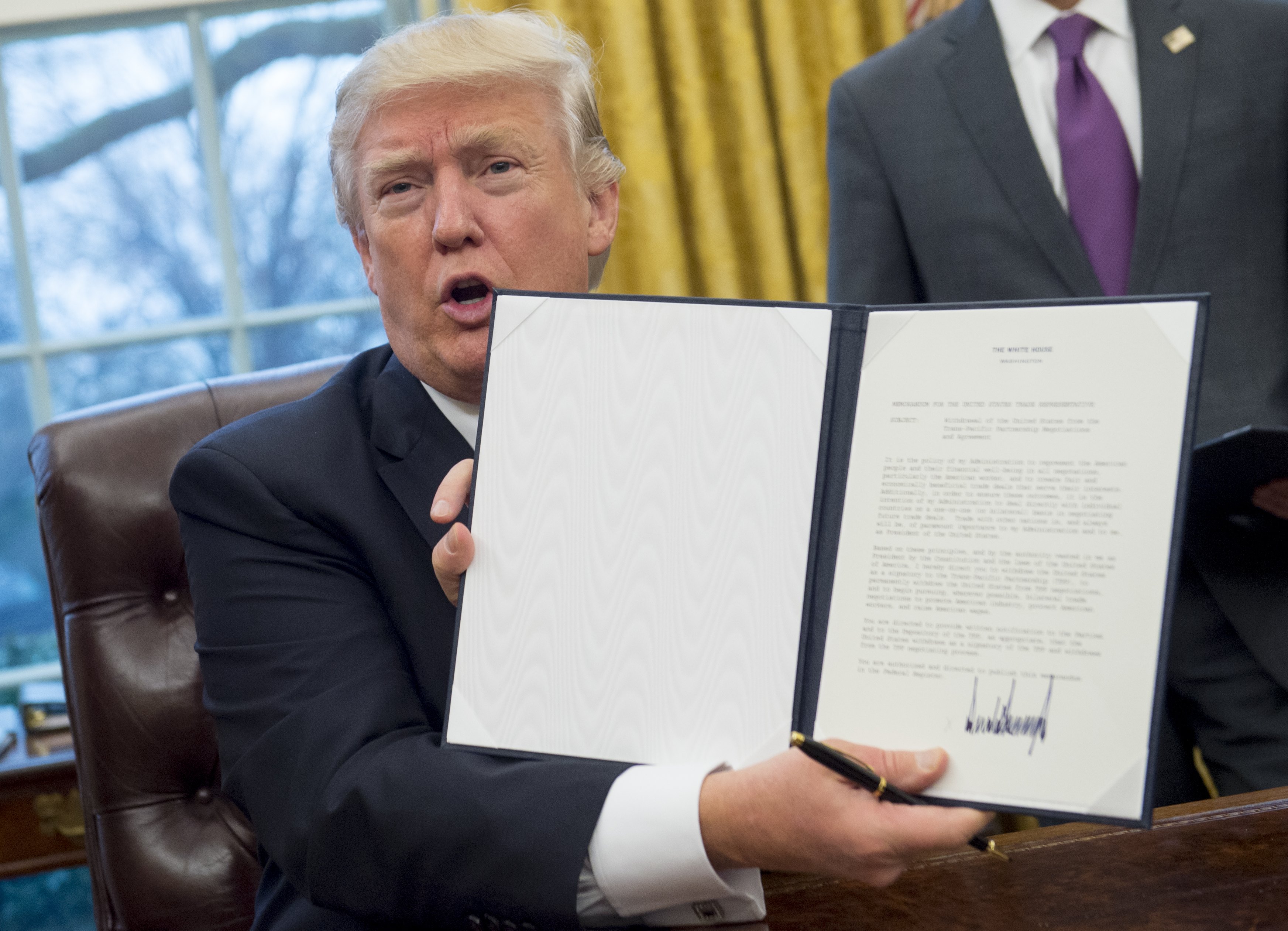 US President Donald Trump holds up an executive order withdrawing the US from the Trans-Pacific Partnership after signing it in the Oval Office of the White House in Washington, DC, January 23, 2017. AFP / SAUL LOEB/ Getty Images)

Some Democrats have tried to use Biden’s record to score political points. 2020 presidential candidate Bernie Sanders has tried to draw a contrast between himself and Biden, saying on CNN in May, “When people take a look at my record versus Vice President Biden’s record, I helped lead the fight against NAFTA; he voted for NAFTA,” he said. “I helped lead the fight against [permanent normal trade relations] with China; he voted for it. I strongly opposed the Trans-Pacific Partnership; he supported it.”

Bernie had other harsh words for Biden, saying “There is a reason why, in the last 45 years, the average American today, despite an explosion of technology and worker productivity, is not making a penny more than he or she made 45 years ago. And one of the reasons is that, for decades, we have had disastrous trade policies. I have to say to my good friend Joe Biden, Joe and I strongly disagree on trade.”

The president has also used Biden’s record on trade, specifically his support for the TPP, in order to go after the former vice president.

The reason for the China pullback & attempted renegotiation of the Trade Deal is the sincere HOPE that they will be able to “negotiate” with Joe Biden or one of the very weak Democrats, and thereby continue to ripoff the United States (($500 Billion a year)) for years to come….

With Iowa, the first Democratic primary state on the schedule, not voting until February 3, and trade currently taking a back-seat to other issues, such as immigration, healthcare, and guns, it remains to be seen how much of an impact Biden’s record of supporting NAFTA and the TPP will have on his chances of becoming the Democratic presidential nominee.