It appeared that President Donald Trump’s two appointees to the high court will be decisive to the outcome of Tuesday’s cases. Justice Neil Gorsuch called the dispute a close case, while Justice Brett Kavanaugh — who does not have a lengthy record on gay rights issues — was virtually silent over the two hours of arguments.

The arguments were also heavy on culture war fare, as the justices wondered what a decision for the LGBT plaintiffs could mean for dress codes, transgender bathroom access, and school sports.

Title VII of the 1964 Civil Rights Act bans discrimination in employment based on characteristics like race or sex. Though sexual orientation (gays and lesbians) and gender identity (transgender people) are not specifically enumerated categories, the plaintiffs in Tuesday’s cases say Title VII’s bar on sex-based discrimination also bans unequal treatment of gays and lesbians.

Tuesday’s arguments featured three LGBT plaintiffs. The first two, Gerald Bostock and the late Donald Zarda, are gay. They claim they were fired for their sexual orientation. The third plaintiff is a trans person named Aimee Stephens, who lost employment as a funeral home director after deciding to transition. The defendant-employers in all three cases dispute that sexual orientation or gender identity were the reason for dismissal.

Judicial conservatives emphasize the original public meaning of a text when interpreting the law. That originalist approach makes this a straightforward case, the defendants say.

“The term ‘sex’ as commonly understood in the era during which Title VII was enacted meant the trait of being male or female and did not refer to sexual orientation or homosexuality,” the defendants told the justices in legal filings, citing contemporary dictionary definitions.

Yet another legal theory conservatives champion, textualism, could require a different result. Textualists say the language itself should be the most important factor when interpreting a law. By the plaintiffs telling, originalism and textualism point in different directions in these cases, making them as significant for gay rights as they are for conservative legal theory.

“Donald Zarda’s claim that Altitude Express fired him ‘because of sex’ could actually be adjudicated without ever using the term ‘sexual orientation’ or ‘gay,'” the plaintiffs wrote. “The claim could accurately be framed entirely in terms of sex and nothing else: Zarda was fired for being a man attracted to men.”

Gorsuch, an avid advocate for textualism, showed considerable sympathy for the plaintiffs’s position. He said it is difficult to isolate sexual orientation from sex. That’s particularly problematic for the defendants, he continued, because sex can never be a contributing cause in employment decisions under Title VII.

“In what linguistic formulation would one say that sex, biological gender, has nothing to do with what happened in this case?” Gorsuch asked Jeff Harris, who represented the defendants. (RELATED: The Supreme Court Will Decide Whether Encouraging Illegal Immigration Is Protected Speech) 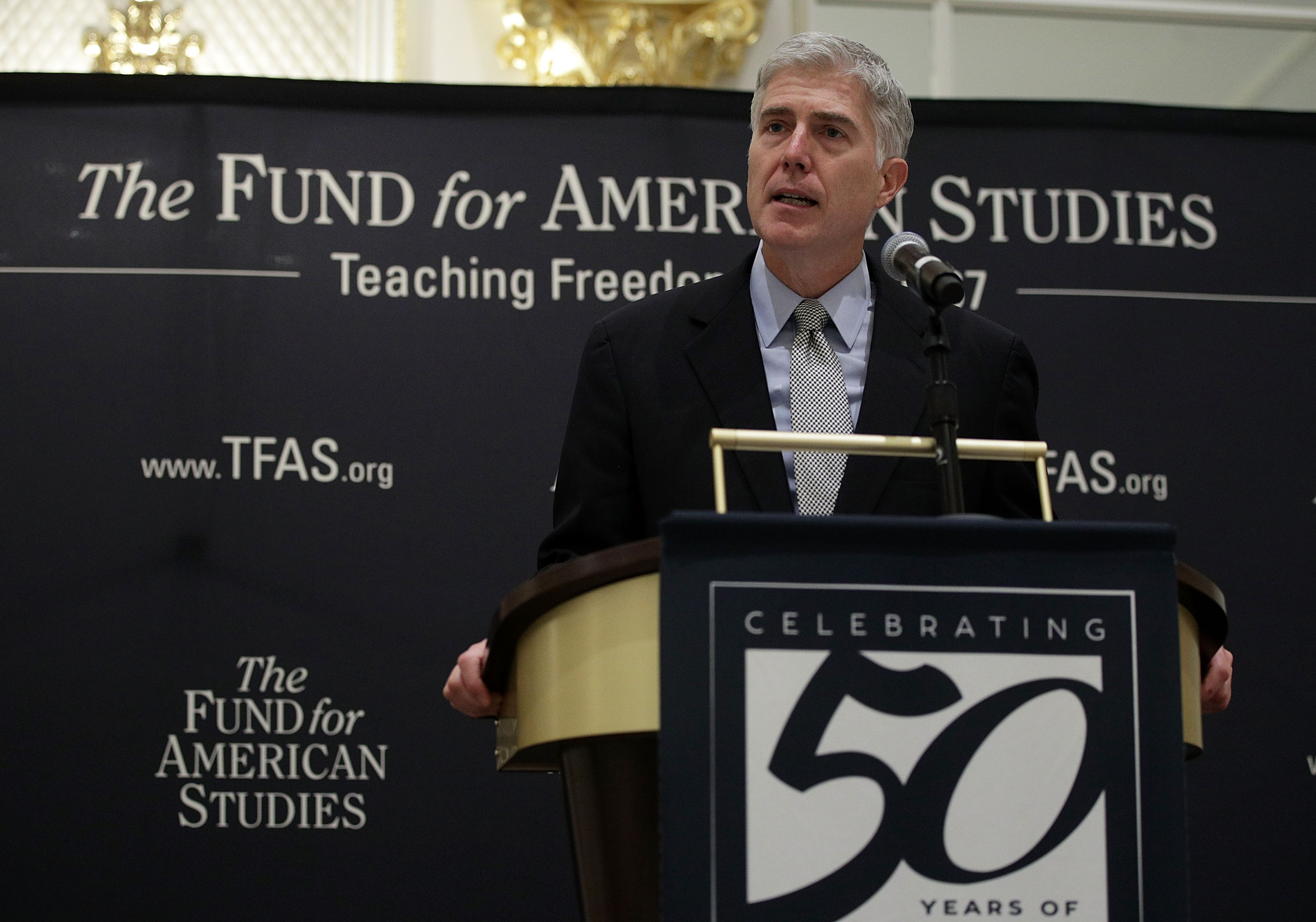 Justice Neil Gorsuch speaks at an event hosted by The Fund for American Studies on September 28, 2017. (Alex Wong/Getty Images)

Yet Gorsuch later qualified that point. He said the case was a close one, but that a ruling for the LGBT plaintiffs could cause “social upheaval.” Better to rely on ordinary political process to update Title VII, he suggested.

“We’re talking about the text — it’s close,” Gorsuch said. “The judge finds it very close. At the end of the day, should he or she take into consideration the massive social upheaval that would be entailed in such a decision?”

Justice Samuel Alito, who seemed the most skeptical of the plaintiffs’s arguments, took a similar tack, saying it would be anti-democratic for the Court to rule for the plaintiffs.

“If the Court takes this up and interprets this 1964 statute to prohibit discrimination based on sexual orientation, we will be acting exactly like a legislature,” Alito said.

Chief Justice John Roberts expressed concern that a ruling for the plaintiffs could adversely effect religious organizations that have deeply held beliefs about sex and gender. Solicitor General Noel Francisco seized on that point during his presentation. When Congress has expanded Title VII in the past, Francisco said, it simultaneously expanded religious exemptions. To rule for Tuesday’s plaintiffs would accomplish the former, but not the latter.

The Trump administration supported the defendants before the high court in Tuesday’s argument.

The plaintiffs have also connected discrimination against LGBT workers with the kind of discrimination by association the Supreme Court condemned when it struck down laws banning interracial marriage. The Court said those rules punished people based on their romantic associations. Even though those laws applied equally to whites and blacks, the justices still said they were discriminatory. Justice Stephen Breyer broached those arguments in the context of religion.

“Suppose a Catholic and Jew want to get married,” Breyer said. “Employer fires the Catholic. Why? He is not against Catholics. He’s against intermarriage. And obviously I can use the same example with race, which is famous.”

“If there is a claim there, why isn’t there here?” Breyer added.

Alliance Defending Freedom (ADF) represented the defendant in the case involving a trans person who lost work after transitioning. ADF argued that a ruling for the trans plaintiff would collapse all permissible sex-based distinctions. As such, things like transgender bathroom access would become legally mandated. ADF lawyer John Bursch used the example of forcing a battered women’s shelter admitting transgender people to illustrate the stakes.

“You can never treat a man who identifies as a woman differently because to do that is sex discrimination,” Bursch said to the Court of the plaintiffs’s position. “When you do that, there is no sex discrimination standard under Title VII anymore. It’s been completely blown up.”

The plaintiffs counter such a drastic outcome can be avoided with a simple legal test asking whether there is real harm behind policies like sex-specific bathrooms.