President Donald Trump is now staring down the possibility of impeachment largely due to a whistleblower complaint that originated within the Central Intelligence Agency (CIA).

John Kiriakou is a former CIA agent who was prosecuted under former president Barack Obama and was convicted of giving classified information to a journalist.

The Daily Caller spoke to Kiriakou Wednesday to get his thoughts on the CIA, impeachment, and what it means for the future of Trump’s presidency.

TheDC: Since the beginning of Trump’s presidency, he has repeatedly made negative comments about American intelligence agencies. Do you think that in reaction, some intelligence officials have a bias against Trump or a dislike of Trump because of his comments?

Kiriakou: I absolutely do. And I believe that virtually since the time that he took office — you might remember Senate Minority Leader Chuck Schumer saying in early 2017 that he had warned the president against taking on the intelligence community because they have nine ways from Sunday to get back at you.

And it’s true they have nine ways from Sunday to get back to you. One that I talked about at the time I called ‘slow rolling’ a president, not specific to Donald Trump, or to any president, that they don’t like. The leadership of the CIA, many of them entered the Senior Intelligence Service during the Obama administration and are holdovers. These leaders, these bureaucrats are in positions of power and authority for 20, 25, 30 sometimes 35 years and presidents come and go. They’re there forever and they know that if they don’t like a president, they just ignore him and they can out wait him. (RELATED: Report: AG Barr Is Ramping Up His Probe Of CIA, FBI Activities In 2016) 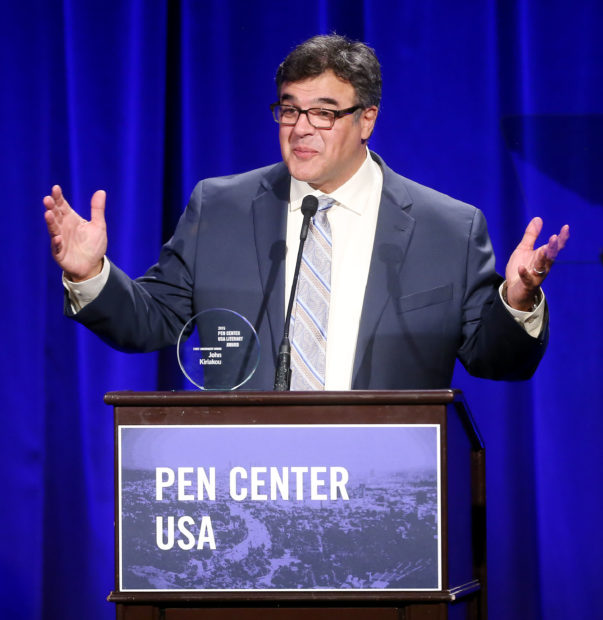 Why Donald Trump is different is that he actively takes them on. Presidents like Jimmy Carter and Bill Clinton, the CIA didn’t like them, but they weren’t antagonistic to the intel — they weren’t seen by the intelligence community as antagonistic.

Donald Trump, I think, is seen as antagonistic which in my view is not a bad thing. Sometimes you need to take on the intelligence community. They’re fat and happy and they’re a big lumbering bureaucracy and sometimes they need to be shaken up. Well in response to his comments I really believe that they’ve made a move against this president.

TheDC: There was an article published in Rolling Stone the other day that argued that this CIA whistleblower isn’t really a whistleblower at all.

Kiriakou: Yeah, I’m on record as saying exactly that. I don’t think this is a whistleblower.

I don’t think this is a whistleblower. I think this is a concerted effort by a group within the CIA to try to discredit and attack the president. I’ll tell you why I feel that way. The CIA, as soon as you get hired by the CIA, by the Directorate of Intelligence, that’s the analytic arm, you’re sent to the CIA’s training facility at the farm and they beat into you over the course of not just the six months that you’re there, but the whole of your career, they beat into you the CIA writing style so that when something was being written, the president or vice president or the national security adviser or the secretaries of state or defense, it looks exactly the same stylistically no matter who wrote it.

It reads like it was written by a team of attorneys. And I think that’s exactly what happened. What the whistleblower protection law says is when you when you find evidence of waste fraud abuse or illegality or threats to the public health or public safety you go to your to your boss within the chain of command and then with the boss you go to the IG, [and] the IG does an investigation. If the investigation finds that the complaint is valid, he goes to the Oversight Committee. That’s not what happened here. (RELATED: Ex-CIA Officials Fume About Declassification Order, Ignoring Previous Leaks Of Secret Sources And Methods) 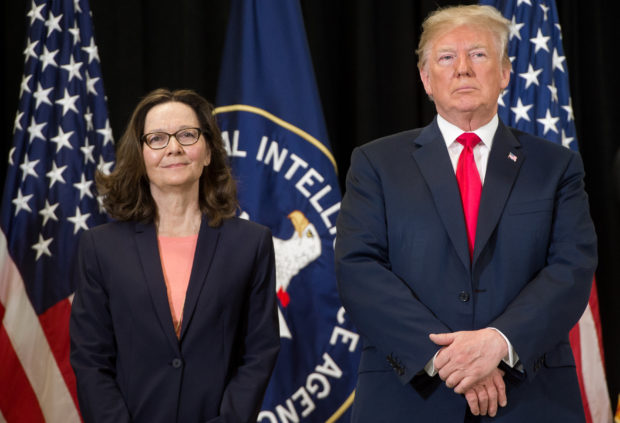 US President Donald Trump stands alongside Gina Haspel before she is sworn-in as Director of the Central Intelligence Agency during a ceremony at CIA Headquarters in Langley, Virginia, May 21, 2018. SAUL LOEB/AFP/Getty Images

What happened here was the whistleblower — I use air quotes around the word whistleblower — went to his boss, his boss went to his boss. They went to the IG, then the IG went to the general counsel and the general counsel went to the leadership and then the leadership, along with the general counsel his team of lawyers, they came up with this with this complaint that reads like a legal contract. Then that was finally sent over to the IG, and that’s not what the law calls for. That’s why I think this is this is actually a coordinated effort by elements of the agency. And I’m not blaming Gina Haspel, because I frankly don’t know where she stands on this issue, but it’s a coordinated effort by elements of the agency to try to discredit the president.

TheDC: You said that you think a lot of people in the CIA are against Trump. Do you think that they are trying to influence the 2020 elections in favor of a Democratic candidate?

Kiriakou: I do. I do indeed because I think that they think they can better work with the Democrat. You know this is the thing too, and it’s not specific to Democrats. It’s specific to anybody who doesn’t have experience in foreign policy or intelligence except for Donald Trump. So Donald Trump aside, what the CIA loves to do, and this is how they sucked Barack Obama right in; you got a president elect who doesn’t have much in the way of experience. He’s entitled to a PDB briefing, that’s the president’s daily brief briefing, the most highly classified documents produced by the Intelligence Committee starting the day after the election.

And so they go to that president-elect and they say ‘Mr. president-elect, we want to show you the cool and amazing things that we are doing all over the world.’ And they give him the PDB and they give him these blue border reports or black border reports that are classified at levels above top secret [and they] sucked him in and now, he’s part of the gang. He’s one of the guys, he’s in on all the cool secrets, you know. (RELATED: Former CIA Director Regrets How Intel Agencies Treated Trump) 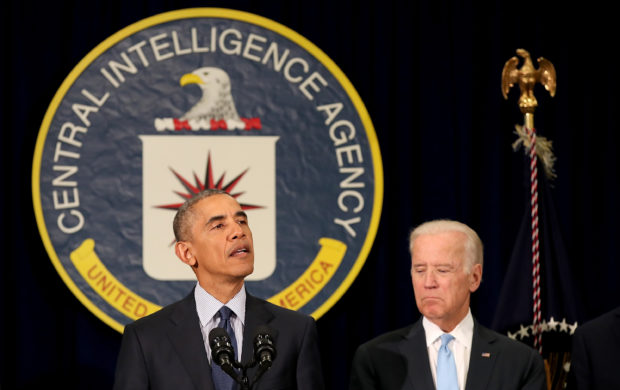 That’s what would happen to Barack Obama, who had no intelligence experience whatsoever. Well Donald Trump didn’t buy it, as no president-elect should buy it. I think every president elect should be skeptical of what the intelligence community is telling them. Well, they don’t like that they couldn’t co-opt [Trump]. They don’t like that they couldn’t suck him in and make him one of their cheerleaders, which they have been so successful at doing with other presidents over the years. And I think this is a way to get back at him.

TheDC: One thing that’s very interesting about the Trump era is these former intelligence agents, former spies are on cable news networks all the time.

TheDC: You know, John Brennan works from MSNBC, Andrew McCabe’s at CNN and these guests are treated as authoritative voices but do you think they still have a loyalty to their agency?

Kiriakou: Oh my God, I’ve been out of the agency 15 years and I still say ‘we’ when I’m talking about it, and I have to catch myself. 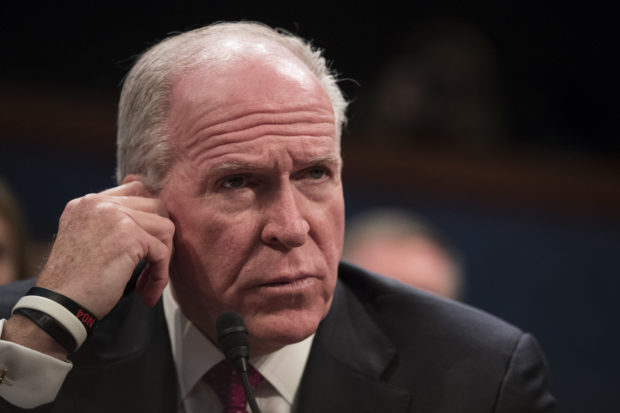 So absolutely nothing but an undeniable loyalty to the agency. And it’s it’s more than just those two. So there are a lot of these guys. FBI, CIA, NSA, and they all have loyalties to their agencies. They all have loyalties to that bureaucracy. Don’t forget, Washington’s a small town. I’ve been here for 37 years. I’ve known John Brennan for 30 years. John Brennan will tell anyone in town who is willing to listen that he’s doing this because in the next Democratic administration he wants to be secretary of defense. That’s partly what this is about. (RELATED: Peter Strzok Suspected CIA Was Behind Inaccurate Media Leaks)

Kiriakou: Yeah, I think that they’re going to find it much easier to influence presidents once Donald Trump is no longer in office. I think they want to go back to the old ways of doing business where they have not just a seat at the table, but the director of the CIA is in the president’s morning briefing every day. And we know that that’s not the case right now.

So yeah I think that they’re very much looking forward to Donald Trump not being President anymore so they can be, you know, one of that group that runs the show. (RELATED: Ex-CIA Director John Brennan Accuses Trump Of Treason Following Putin Summit)

This interview has been lightly edited for clarity and grammar.