Editor’s note: We endeavor to bring you the top voices on current events representing a range of perspectives. Below is a column supporting president Trump’s Syria withdrawal. You can find a counterpoint here, where Blaise Misztal argues it is a mistake.

Official Washington was rocked Sunday night by the Trump administration’s announcement that it was pulling military forces from the Syria-Turkey border. Trump took to Twitter first thing Monday to explain, noting that “it is time for us to get out of these ridiculous Endless Wars, many of them tribal, and bring our soldiers home.” He then added that “Turkey, Europe, Syria, Iran, Iraq, Russia and the Kurds will now have to figure the situation out.”

While families of these troops likely said, “Thank God” and careful observers saw that this was only a redeployment of a small number of forces rather than the withdrawal suggested by Trump’s tweets, the foreign policy establishment went ballistic.

Former Secretary of State Hillary Clinton, for example, tweeted: “Let us be clear: The president has sided with authoritarian leaders of Turkey and Russia over our loyal allies and America’s own interests. His decision is a sickening betrayal both of the Kurds and his oath of office.”  Not to be outdone, Republican Senator Lindsey Graham stated that: “This impulsive decision by the President has undone all the gains we’ve made, [and] thrown the region into further chaos.” Many other officials and think-tank scholars raged at Trump’s move. (RELATED: Tucker Carlson Rebuts Washington Neo-Cons Agitated By Trump’s Syria Withdraw) 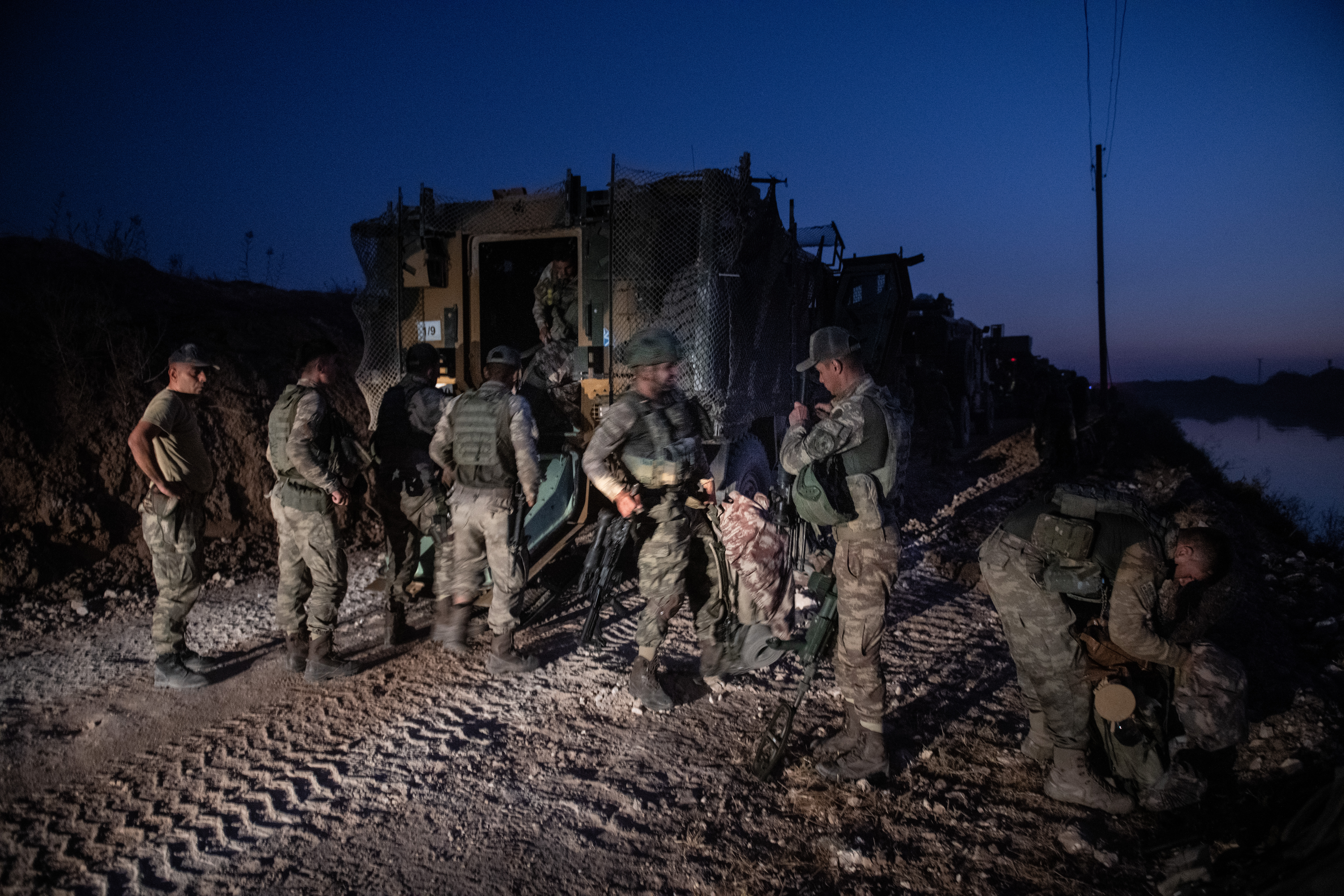 AKCAKALE, TURKEY – OCTOBER 09: First group of Turkish infantry prepare to enter Syria on the border between Turkey and Syria on October 09, 2019 in Akcakale, Turkey. The military action is part of a campaign to extend Turkish control of more of northern Syria, a large swath of which is currently held by Syrian Kurds, whom Turkey regards as a threat. U.S. President Donald Trump granted tacit American approval to this campaign, withdrawing his country’s troops from several Syrian outposts near the Turkish border. (Photo by Burak Kara/Getty Images)

Of course, it would be easier for Americans to believe these folks if it weren’t for the fact that, to use President Trump’s words from the 2016 campaign trail, they have “perfect résumés but very little to brag about except responsibility for a long history of failed policies and continued losses at war.”

In this case, even though it is a small redeployment, Trump is right to pull back those troops.  As has been the case repeatedly since the end of the Cold War, the foreign policy elite is wrong. Indeed, we need to go further and withdraw all overt military forces from the country and rethink our entire approach to the Middle East.

And the president seems to understand this. He tweeted recently that, “GOING INTO THE MIDDLE EAST IS THE WORST DECISION EVER MADE.” While there are other historical foreign policy missteps that would rival our Middle Eastern blunders, Trump understands that what we’ve been doing isn’t working, noting in that same tweet that we have spent trillions in the region and “Thousands of our Great Soldiers have died or been badly wounded.” Of course, the establishment panics every time he wants to reduce ever so slightly America’s military footprint abroad. But we need to go even further. We need to withdraw from not only Syria but Afghanistan as well. This minor pullback should only be the first step. Here is why a fuller withdrawal is in order: 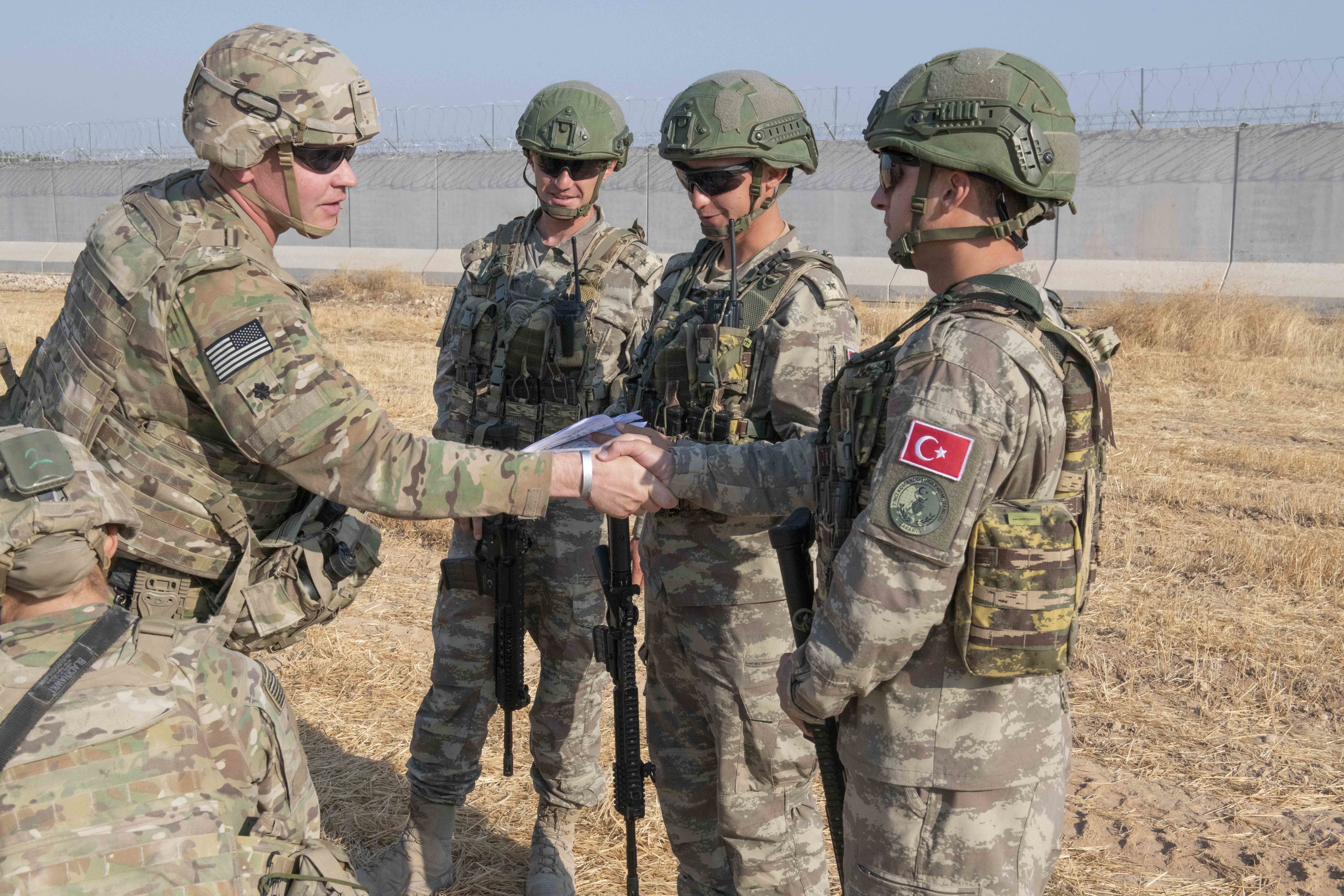 NORTHEAST, SYRIA – OCTOBER 4: In this handout provided by the U.S. Army, U.S. and Turkish military forces conduct the third ground combined joint patrol inside the security mechanism area in northeast Syria, Oct. 4, 2019. The patrol allowed both militaries to observe first-hand progress on destroyed fortification that is a concern for Turkey. The security mechanism is intended to address Turkey’s security concerns, maintain security in northeast Syria so Daesh cannot reemerge, and allow the Coalition to remain focused on achieving the enduring defeat of Daesh. The U.S. is currently executing concrete steps to ensure the border area in northeast Syria remains stable and secure. (Photo by Andrew Goedl/U.S. Army via Getty Images)

First, we are stuck in the middle of a multi-sided fight in which our interests are extremely limited. We went in to destroy ISIS’s territorial caliphate that could provide a base of operations for this violent terrorist organization. We accomplished that goal, and we can safely leave it up to local actors who share our interests to keep ISIS down and out. Buckpassing to those with greater stakes in the outcome and better local knowledge about how to effectively handle threats is a time-honored tradition in international politics. If ISIS poses a threat to American interests in the future, our long-range strike capabilities are more than capable of keeping us safe without a permanent garrison in Syria.

Second, the Kurdish groups in Syria that we are protecting in the region aren’t exactly ideal partners. Indeed, one has espoused a communist ideology, is an offshoot of a group on the U.S. State Department list of terrorist organizations, and has feuded with other Kurdish groups in Iraq that have also fought against ISIS.

Third, one dangerous consequence of remaining in Syria is that we could end up in a fight with Iranian proxies or Russian forces that could drag the U.S. into a broader war that would be unnecessary and extremely costly. The fact is that both countries have long-standing ties to Syria and thus their footprint in the country is not new. They too have an interest in keeping ISIS down and it is to our advantage to have those countries tied up helping the Syrian government. A broken Syria is no gift to our adversaries. (RELATED: Turkey Launches Military Offensive In Northern Syria As US Troops Leave The Region) 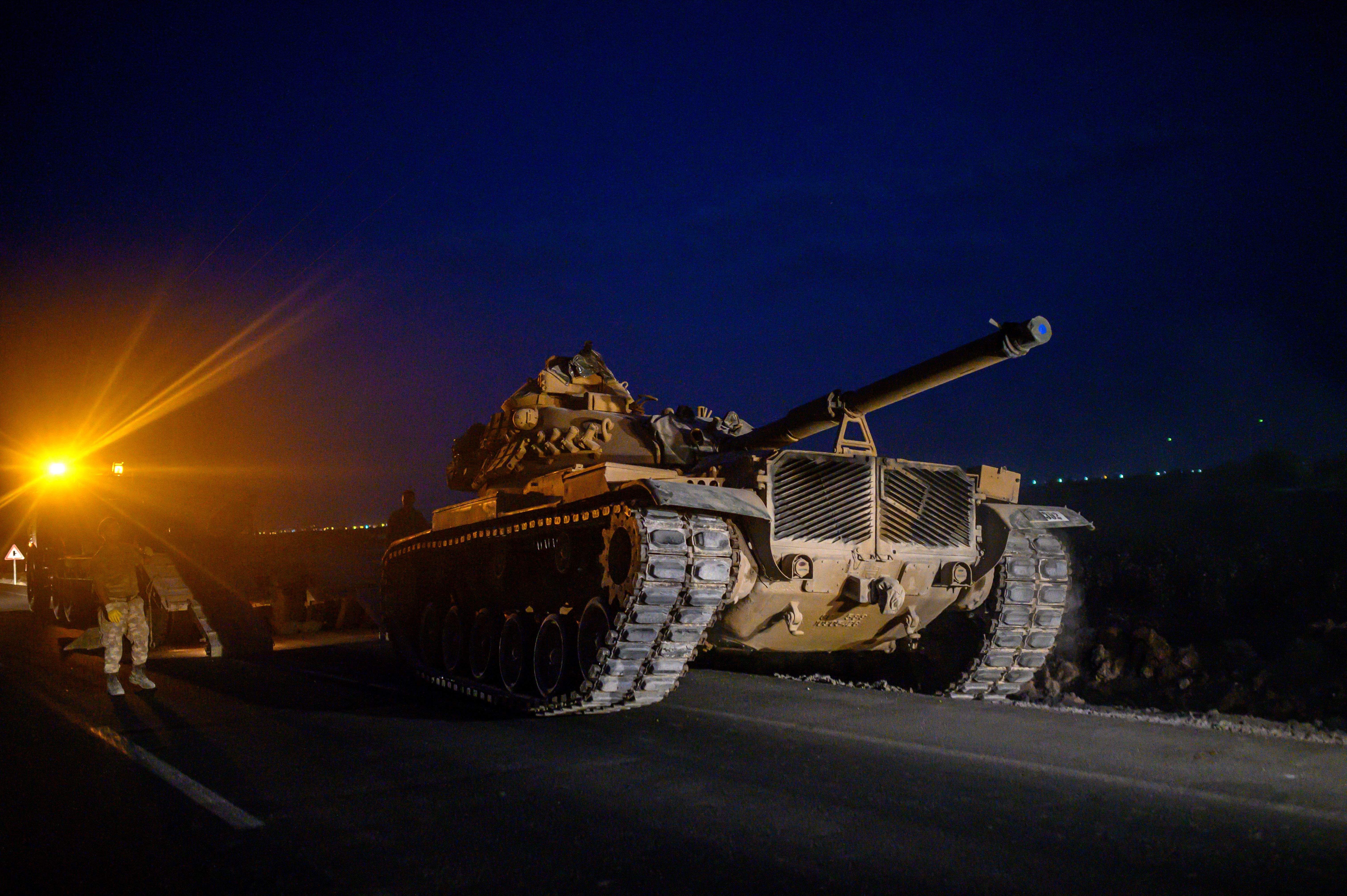 A Turkish army’s tank drives towards the border with Syria near Akcakale in Sanliurfa province on October 8, 2019. – Turkey said on October 8, 2019, it was ready for an offensive into northern Syria, while President Donald Trump insisted the United States had not abandoned its Kurdish allies who would be targeted in the assault. Trump has blown hot and cold since a surprise announcement two days before that Washington was pulling back 50 to 100 “special operators” from Syria’s northern frontier. (Photo by BULENT KILIC / AFP) (Photo by BULENT KILIC/AFP via Getty Images)

Fourth, Americans understand that we have more important priorities. Our national debt is a growing threat to our future prosperity and security. We’d be wise to focus on it rather than a desolate corner of a ruined country half-way around the world that matters very little to our safety or prosperity. And as our new National Security Strategy emphasizes, great powers such as China should receive more of an attention than fourth-rate powers in the Middle East. Instead, we stay mired in the Middle East, an area of declining strategic importance. The Chinese must be laughing at us: we talk up the threat they pose but focus our attention on minor issues and are unable to extricate ourselves from unwise commitments. Again, Trump gets it instinctually, noting Monday night that: “the two countries that are most disappointed that we’re leaving are China and Russia because they love that we’re bogged down and just watching and spending tremendous amounts of money instead of continuing to build our forces.”

And lastly, this is good policy and good politics. Polling shows that our Middle East wars are not popular. And Trump himself understands he made a campaign promise that he’d be unwise to violate: “I fully understand both sides of it. But I campaigned on the fact that I was going to bring our — our soldiers home, and bring them home as rapidly as possible.”

The Syria pullback is a good first step. Let there be many more on the road out of the Middle East.

William Ruger is the Vice President for Research and Policy at the Charles Koch Institute. He is also a veteran of the war in Afghanistan.