Lev Parnas and Igor Fruman were indicted along with two other associates in what prosecutors say was a conspiracy to make so-called “straw” donations to political campaigns and committees in order to advance political and business interests.

Parnas, Fruman, and co-defendants David Correia and Andrey Kukushkin “conspired to circumvent the federal laws against foreign influence by engaging in a scheme to funnel foreign money to candidates for federal and State office so that the defendants could buy potential influence with candidates, campaigns, and the candidates’ government,” reads the four-count indictment.

They also worked to advance the interests of at least one Ukrainian government official with whom they were working, according to the indictment.

The indictment refers to a $325,000 that Parnas and Fruman made to a political committee in 2018. The committee is not identified in the indictment, but it has been previously reported that the pair gave that amount to a pro-Trump super PAC. The indictment also points to $3 million in contributions from the PAC to a U.S. congressman who appears to be former Republican Rep. Pete Sessions. (RELATED: Exclusive Sit Down With Rudy Giuliani)

According to the indictment, at around the time that Parnas and Fruman began raising funds for Sessions, Parnas met with the congressman to seek his assistance “in causing the U.S. government to remove or recall the then-U.S. Ambassador to Ukraine.”

“PARNAS’s efforts to remove the Ambassador were conducted, at least in part, at the request of one or more Ukrainian government officials,” the indictment says.

The indictment also describes a $2,700 payment that Parnas made to the congressman. Federal Election Commission records show that Parnas gave that amount to Sessions on June 25, 2018. 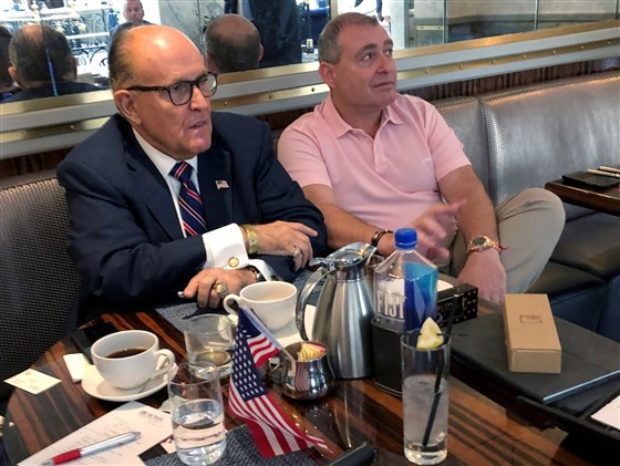 In May 2018, Sessions sent a letter to Sec. of State Mike Pompeo calling for the removal of Marie Yovanovitch as ambassador to Ukraine. Sessions alleged that Yovanovitch displayed an “anti-Trump bias.” Yovanovitch has since been removed from that position.

The foreign national, who had ties to Russia, made two wire transfers totaling $1 million to Parnas and Fruman in September and October 2018. They in turn made two contributions of $10,000 each to two Nevada state political candidates on Nov. 1, 2018, according to the indictment.

Nevada campaign finance records show that contributions under Fruman’s name were made on Nov. 1, 2018, to Adam Laxalt and Wesley Duncan, who ran unsuccessfully for governor and attorney general, respectively.

The indictment suggests that authorities monitored Parnas and Fruman’s communications as part of the investigation, which was carried out by the U.S. attorney’s office in Manhattan.

“[T]his is what happens when you become visible…the buzzards descend,” the indictment quotes a Parnas associate telling him after reports about his campaign contributions first surfaced.

“That’s why we need to stay under the radar,” Parnas replied.

Parnas and Fruman also worked closely with Giuliani to collect information about Biden and possible Ukrainian meddling in the 2016 U.S. presidential election.

Giuliani has for months pushed the allegation that Biden pressured Ukraine’s president in 2016 to fire a prosecutor who was investigating Burisma Holdings, a Ukrainian energy company that had Hunter Biden as a board member.

Parnas and Fruman began in early 2019 arranging interviews for Giuliani and former Ukrainian prosecutors as part of the Biden investigation. They helped set up an interview with Igor Shokin, the prosecutor who claims that he was fired under pressure from Biden. They also arranged an interview for Giuliani with Yuri Letsenko, who succeeded Shokin, according to documents that Giuliani has released.