DR. SEBASTIAN GORKA: As a child of parents who escaped Communism, I was very moved when you told Congress that America would never be a socialist country. Did you ever think that any American president would have to say such a thing to Congress?

PRESIDENT DONALD TRUMP: No, I never did. I never thought it would be part of the dialogue. I am happy to report that I don’t think that it will be lasting very long. Our country is doing better than it has ever done economically, with the stock market and 401Ks — and I’m not just talking about people of wealth, I’m talking about people who haven’t had a job in years and now have jobs. We have the greatest number of jobs that we’ve ever had, almost 160 million, the stock market today just hit another all-time high — all three markets — and people are great. So I think that it would be very surprising to me if that debate carries forward much longer. I hope it won’t, but it could very well be a big dialogue, a big part of the election, but we’re talking about not so very far away. Can you imagine that Sebastian, like seventeen months? Can you imagine that? Time flies!

GORKA: Back when I served as your deputy assistant for strategy —

GORKA: Thank you. In this room, it was just the two of us, May or June of 2017. You said to me, “Sebastian, they’ll never find anything because there isn’t anything,” in regard to Russian collusion.

GORKA: Since then, you have been vindicated by Congress, twice, and now by the Department of Justice with the close of the Mueller investigation. Yet on the left, many still refuse to give up their Russian delusions. Presumably, this is a positive factor for you in 2020 and for the broader “make America great again” agenda. Is it good that they’re constantly beating this dead horse? Is it a good thing for you, Mr. President?

TRUMP: Look, it was so preposterous that at the beginning, I didn’t even take it seriously. When I first heard about “Russia and the Trump administration,” I literally didn’t even take it seriously, but then I saw that they’ll do anything to win. They’ll say anything they have to say. And if you had told me that it could lead to a special counsel, with all that that entails, I would have said, “That’s an impossibility.” But we won, there was no collusion. The problem is I think they could have made that determination in the first two days. I also think that a special counsel never should have been appointed. It’s disgraceful for our country. But we handled it properly. I gave a level of transparency that’s never been given in the history of our country before, ever. And I did that for a reason. I did that: number one, I thought it was important, and number two, I knew there was nothing there. (RELATED: If Barr Fails To Move On Comey’s Cabal, Get Ready For Special Counsel Peter Strzok)

GORKA: When I was last here to see you, I was in the White House Press Briefing Room, and Abilio “Jim” Acosta bowls past me, grabs my shoulder, and in front of witnesses, says “What are you doing here? This is for real journalists.” That’s what Acosta said. He has a high opinion of himself.

TRUMP: You know, it is incredible how wrong they have been.

GORKA: And the Mueller report —

TRUMP: Mueller would have loved to have written something negative, Mueller and his Trump-haters, angry Democrats. If they had one phone call, if they had anything, even a small conversation, they would’ve tried to make it into a collusion. They spent $35 million, and at the end of two years, they say there’s no collusion. 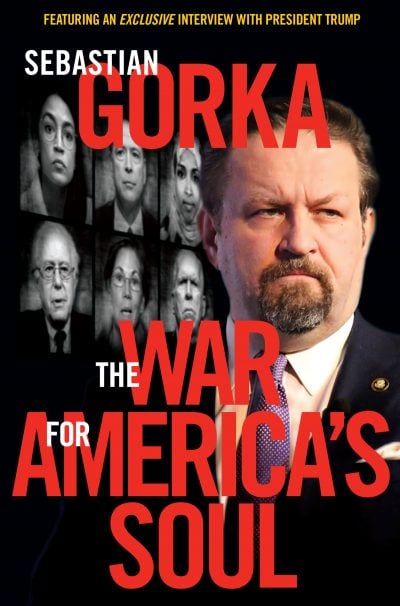 GORKA: According to the Heritage Foundation, your first year in office was even more successful than Ronald Reagan’s. By any objective measure, your administration in the first two years has achieved more than any modern administration in eight years. Are the next six years of your presidency going to be enough to undo all the harm inflicted by Obama and Clinton?

TRUMP: These are just things that we’ve done, all big things. And today, again, we hit the highest ever on the Nasdaq and S&P.

GORKA: What did Paul Krugman say after your election? That the stock market would crash and never recover?

TRUMP: Oh, is that what he said?

TRUMP: Boy, I’ll tell you, if you listened to him … and the guy probably gets a big medal.

GORKA: They gave him the Nobel prize.

GORKA: In the last two years, if you look at Capitol Hill, it’s been a handful of people who’ve had your back. It would seem a no-brainer for the GOP to look at what you’ve achieved and hitch their wagon to your agenda. Does the establishment on the Right understand the significance of 2016, and is that going to change, do you think?

TRUMP: I’ve had great support from a larger number of Republicans than people would think.

TRUMP: Yeah. I really have had.

GORKA: But quietly, you mean.

TRUMP: Yes. But I’ve been disappointed by some, and some are just openly, you know, out there—I mean, they just don’t vote for anything that we’re doing. I don’t have to say who because all you have to do is check the votes. It’s pretty shocking. But I think I’ve had a lot more support from Republican congressmen and Republican senators than people think. I really do. I think I’ve had some really good support. I’ve also supported them. One of the greatest moments is the election of 2018. We won.

GORKA: Right. They were great results.

We won in Missouri; we won in Indiana. In Tennessee, look how great Republican Marsha Blackburn did. How about Florida? You look at Florida, the Senate race between Republican Rick Scott and Democrat Ron DeSantis. We won. Look at the governor of Georgia, where Oprah, President Obama, and Mrs. Obama campaigned; they staked out there and they campaigned. I went there for Brian Kemp, and we won. Look at Ohio, the governor of Ohio, how important is Ohio? The governor’s great. But he was down 7 and he ended up winning by 7 after that final campaign stop, last day, took him up 14 points. Andy Barr in Kentucky was down by 7; he won by 6. Oh also, Cindy Hyde-Smith in the Senate, she was down by 3 or 4 points, and I went down and did two rallies. These aren’t speeches, these are rallies — big deals, with twenty or twenty-five thousand people, or more.

GORKA: And they’re always waiting outside, thousands outside.

TRUMP: Tens of thousands waiting for hours. It shows you how unfair the press is. I go to El Paso, and Beto O’Rouke at that time was the hot new thing, and he heard I was going to do a rally. So he called for a rally. He had 502 people show up. I had 12,000 inside and 35,000 outside. And I mean that place was popping; it broke the [attendance] record [for the site]. We had big screens. And the press said we both had “large” rallies. One reporter in The New York Times actually said his rally was larger than mine…

GORKA: Fake News. In the last year, the tactics of the media and the left have been literally disgraceful. From Justice Brett Kavanaugh, his treatment, to the Covington School boys. Do you expect the tactics to get even worse before 2020? If so, what should the average American do?

TRUMP: I don’t think they can get worse. Because I’ve been a student of politics for a long time. In the history of politics, I don’t think I’ve ever seen anything like Judge Kavanaugh. Those were fabricated stories, fabricated stories. And I have never seen anyone treated so badly as him, in front of his wife and his children, great people. Never saw anything like it. I don’t think it can get worse than that; it can only be the same. That’s the highest standard there is in town. And will it continue?

The New York Times basically has given up journalistic standards. They’ve said, “We don’t care; we’ll say anything.” Essentially, they’re just making up stories. They don’t even call for confirmation; they don’t call for quotes. If they’re doing a bad story on me, they don’t call for a response. And they couldn’t care less. If we tell them it’s untrue, it makes zero difference to them, zero.

GORKA: As a result, how important is social media?

TRUMP: Without it, I guess, I wouldn’t have a voice. Even other voices would be drowned out, you know, like Sean Hannity and Lou Dobbs, and “Fox and Friends” in the morning, other people like Steve Doocy and Ainsley Earhardt, and the whole group, you know, great people. But I think they’re drowned out because eventually they have to succumb to this horror show that’s going on right now.

“Fake News” is a great term for it. I hope I get credit for coming up with that one. But now the Fake News uses it all the time, they’ll say “Fake News has reported,” they’ll say it like they’re legitimate, like they’re talking about somebody else … I never thought the press could be so dishonest. The Democratic Party, the radical, liberal Democrats, are in absolute partnership with the media. It’s crazy.

And when you think of what I’ve done. I’ve strengthened the military to a point where it’s never been. The military was so depleted, we were close to not having a military. I’ve rebuilt the steel industry; steel is hopping now. We were not going to have steel made in this country. Energy, look, we’re now the number one energy producer in the world, oil and gas. We weren’t close when I got elected. I’m approving pipelines now at a pace that nobody’s ever even thought possible. They need them desperately in Texas. I approved all of them: the Dakota Access, the Keystone. I approved them immediately. I got ANWR in Alaska. Ronald Reagan — and everybody who’s tried since — was unable to get that, and I got that approved in Alaska. Look at the judges. I’m now over 120 judges, two of whom are Supreme Court justices.

GORKA: Do you think you’ll get a third Supreme Court justice?

TRUMP: That I don’t know. I hope she [Ruth Bader Ginsburg] and everybody else lives for a long time.

GORKA: Last two questions. How are we doing, Mr. President, in defeating the Deep State?

TRUMP: Well, I think, if it all works out, I will consider it one of the greatest things I’ve done. You look at what’s happened to the absolute scum at the top of the FBI. You look at what’s happening over at the Justice Department, now we have a great attorney general. Whereas before that, with Jeff Sessions, it was a disaster. Just a total disaster. He was an embarrassment to the great state of Alabama. And I put him there because he endorsed me, and he wanted it so badly. And I wish he’d never endorsed me.

It would have been the greatest non-endorsement I ever had. But it’s too bad. But now we have a great attorney general. And I think with the destruction of the Deep State, certainly I’ve done big damage. They’ve come after me in so many different ways; it’s been such a disgrace. But I think it’ll be one of my great achievements.

GORKA: Okay, last question. What would President Trump of 2019 have said to candidate Trump in 2015, by way of advice?

TRUMP: Always be prepared for the unexpected.

Sebastian Gorka (@SebGorka), Ph.D., served as deputy assistant and strategist to President Trump. He is the author of the New York Times bestseller “Defeating Jihad: The Winnable War.”